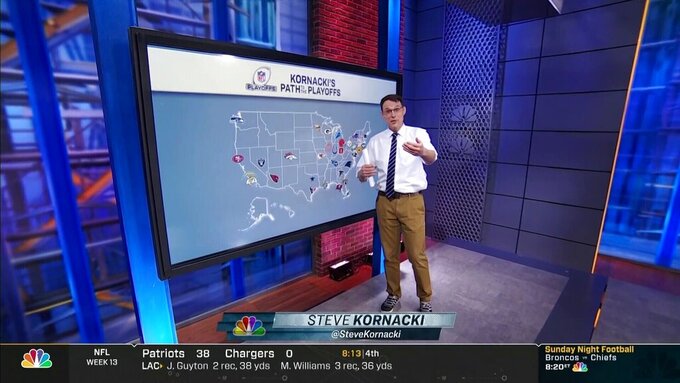 Steve Kornacki provides a look at possibilities for the NFL playoffs during NBC's Football Night in America on Dec. 6, 2020, in New York. Kornacki, who was become a breakout star for his work on analyzing during the presidential election on MSNBC, will be on NBC's pregame show during the rest of the season. (NBC Sports via AP)

Whatever free time Steve Kornacki has on Sundays, he is following the New England Patriots and trying to figure out if they have any hope of keeping their postseason streak alive.

That's why it made perfect sense for NBC to make him part of the network's NFL coverage.

Kornacki, the breakout star of MSNBC's election coverage, will continue to be a part of NBC's “Football Night in America” after his debut appearance last Sunday. Kornacki will be on for the pregame show and during halftime of Sunday's game between the Pittsburgh Steelers and Buffalo Bills.

“I’ve been a football fan pretty much my whole life. So to get a shot to be on something that I’d be watching anyway is pretty cool,” Kornacki said. “What we’re trying to do is attach probabilities to sort of add a layer to the playoff picture, rather than just one through seven and who is in. I hope people found that useful but from my own standpoint, I had a blast doing it.”

Both sides spent a couple of weeks discussing the best formats to present information and the right graphics to use before Kornacki made his debut.

“It’s a different canvas to paint on, and he certainly painted a cool picture,” Flood said. “It was wonderful to have Steve engaged in every process of it. You know, designing the graphics that were user friendly to him that made him feel like he was in an environment that they could execute.”

Kornacki’s analysis of polls and voting on the big board has been a part of MSNBC’s election coverage since 2014, but the political correspondent rocketed to popularity this year with the increased focus on the election. Kornacki's touch screen and beige khakis became trending topics on social media. Even MSNBC got in the act by showing a “Kornacki Cam” on the lower right portion of the screen during commercials.

Kornacki is amazed that he has become a pop culture icon.

“I did not foresee any of that or could not have planned any of that,” he said. “When I was doing the results Tuesday, Wednesday, Thursday, I was really filtering out kind of everything else. But I had enough friends and family sending me things by the end of the week that I got a sense of it. It has surprised me as much as I think it has probably surprised other people.”

Kornacki, who grew up in Massachusetts, is likely to only briefly mention the Patriots on Sunday after their postseason hopes took a major hit with Thursday night's 24-3 loss to the Los Angeles Rams.

Flood admires Kornacki because of the way he was able to multitask and process multiple streams of information quickly, much in the same way an analyst does during a game.

“I’m someone who’s scared to death of math, as many Americans are,” Flood said. “And this guy made it so friendly.”

This isn't the first time that NBC's news and sports divisions have worked together. Brian Williams — a fervent NASCAR fan — hosted coverage of a race at Homestead, Florida, and there is plenty of crossover between the two divisions during the Olympics.

How NBC and MSNBC will continue to capitalize on Kornacki's popularity will be interesting to watch next year. Kornacki said he is just focusing on the immediate future.

“The election for me is still not really over because we’ve got control of the Senate and Georgia, deciding that on Jan. 5. When I haven't been doing the NFL stuff, I've been preparing for that,” he said. “I think there’s some reasons to think Georgia is gonna be a little quicker counting their votes but it could plausibly take a couple days. And then we'll figure out the future after that.”