NCAA Latest: Tech will be rolling with Mahomes 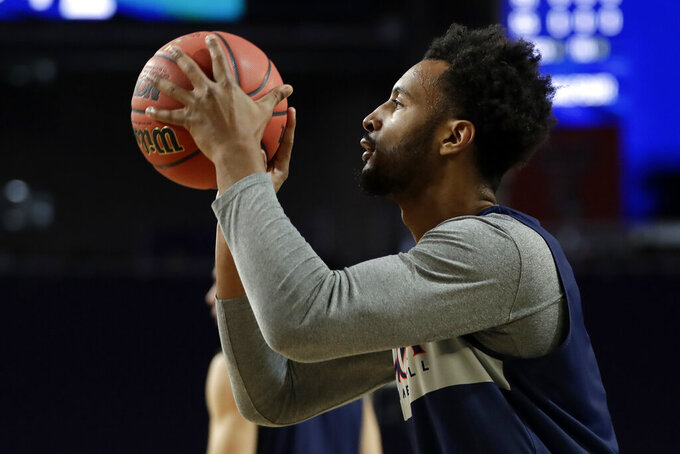 The Latest on the Final Four (all times local):

Auburn has Sir Charles, Michigan State has Magic and Virginia has Ralph Sampson.

Texas Tech will have Patrick Mahomes.

The Chiefs quarterback and reigning NFL MVP plans to watch the Red Raiders play the Spartans in the Final Four on Saturday night. Mahomes doesn't have any official obligations, though he may give the team a shout-out, but he's looking forward to the festive Final Four atmosphere.

Mahomes played high school basketball and still loves the game, even though it got him into trouble recently. A grainy video of Mahomes making a slick crossover move in a pickup game went viral, and Chiefs general manager Brett Veach — concerned about a potential injury — put an end to those endeavors.

He'll have to settle for getting his basketball fix as a fan.

One of his favorites involves dogs named Sugarfoot and Foxy.

"Actually, they're real dogs and coach (Chris) Beard has talked a lot about street dogs and has labeled this team that," Adams said. "He likes the underdogs, the street dog mentality, kind of a blue-collar guy anyway. Those were stories about two dogs, friendly dogs except when there was another dog in the neighborhood. There also were good fighters and we talk a lot about fighting."

No word if Adams will use Sugarfoot and Foxy for Saturday's Final Four game against Michigan State. Rest assured, though, there will be a story or two.

Virginia's Braxton Key just can't get away from Auburn.

The 6-foot-8 junior transferred after two seasons at Alabama, and received a waiver from the NCAA to play right away this season instead of having to sit out a year. Yet his first year with the Cavaliers now has him set to play the Tigers —Alabama's fiercest rival— in Saturday's national semifinals.

Key said he's heard from "a lot of my frat friends, former teammates, everyone" from his Alabama days about the importance of beating Key's (former) instate rival.

This will be the sixth time Key has faced Auburn. He scored 18 points and 17 points in two meetings during the 2016-17 season, but managed a total of 24 points in three meetings last season.

The sun came up the next day for the Purdue Boilermakers, and coach Matt Painter kept his eye on the big picture.

After that heartbreaking loss to Virginia in the Elite Eight, one way of looking at it was that the Boilermakers were lucky to be there. That's the approach that Painter took, at least.

"It's part of competition," Painter said on Friday, after a presentation at the coaches' conference that runs in conjunction with the Final Four. "The thing you have to keep in mind about our loss is that we were very fortunate to be in the game in the first place."

In the Sweet 16 game against Tennessee, Purdue's Carsen Edwards got fouled while taking a 3-pointer with the clock running down. He made two of the three free throws to get the game into overtime, and from there, Purdue won.

Against Virginia, Cavs forward Mamadi Diakite made a buzzer beater to send the game into overtime, but that time, the Boilermakers weren't able to overcome.

"Our guys are crushed," Painter said. "It's something that will stick with us forever, but you've got to move on."

Coach Tony Bennett has taken Virginia to the Final Four for the first time in 35 years, and his appearance has put him in even more exclusive company. He's part of only the second pair of fathers and sons to coach a team in the national semifinals. His father, Dick Bennett, took Wisconsin to the Final Four in 2000.

The first family duo to accomplish the feat was Georgetown's John Thompson, who took the Hoyas there in 1982, 1984 and 1985, and John Thompson III, who went with the same program in 2007.

Bennett said he was proud to be in such a small club, particularly because that means he's even with his dad.

Injured Auburn star Chuma Okeke is not expected to travel to Minneapolis to be with the team when it plays Virginia in the Final Four on Saturday.

Okeke injured his knee a week ago in the Sweet 16 victory against North Carolina. He had surgery in Birmingham, Alabama, to repair a torn knee ligament on Tuesday. An Auburn spokesman said Friday the team was not expecting Okeke to make the trip.

Auburn players have rallied around Okeke, the team's leading scorer. Malik Dunbar wore Okeke's No. 5 jersey during warmups for the Elite Eight game against Kentucky and says he plans to do the same before the Virginia game.

Charles Barkley isn't the only big-name fan of Auburn.

Golden State Warriors star Steph Curry surprised the Tigers — and another Under Armour-sponsored school, Texas Tech — with pairs of his new sneakers for their Final Four appearance on Saturday night. Curry recorded videos for both of the teams and wished them well as they compete in the national semifinals.

"It was amazing. He gave us a special shoutout," Tigers star Bryce Brown said. "He said he was an underdog like us, that this run was like the run he was on with Davidson."

Before becoming an NBA star, Curry led tiny Davidson to the Elite Eight of the 2008 tournament.

Curry is one of Brown's favorite players, so getting a shout-out? "That meant a lot," he said.

Auburn star Jared Harper and some of his teammates are dealing with an illness that he hopes will be better by Saturday night.

Harper started feeling sick Thursday night and began taking some medicine, and team doctors gave him a shot Friday morning. He was still sniffling during his media rounds before taking the floor for the Tigers' open practice ahead of their semifinal date with Virginia.

Fellow guard Bryce Brown felt the worst of it on Thursday, but was on the rebound Friday.

"We've got a bunch of guys that are sniffling and hacking and coughing, be we don't play today," coach Bruce Pearl said.

The flu bug swept through North Carolina last weekend in Kansas City, where the Tigers knocked off the Tar Heels in the regional semifinal. It's unclear whether Harper may have gotten the same bug.

Basketball fans have lined up early for the first entry into U.S. Bank Stadium, as the Final Four teams hold open-to-the-public workouts.

Auburn takes the court first, followed by Virginia, Texas Tech and Michigan State. There's no charge to attend the practices. The games, of course, come at a cost. According to secondary market ticket seller StubHub, as of Friday morning, the lowest price for the semifinal games on Saturday evening is $385.

U.S. Bank Stadium opened in 2016, the home of the Minnesota Vikings and the host of the Super Bowl after the 2017 NFL season. The seating capacity has been expanded for the Final Four to 72,000.