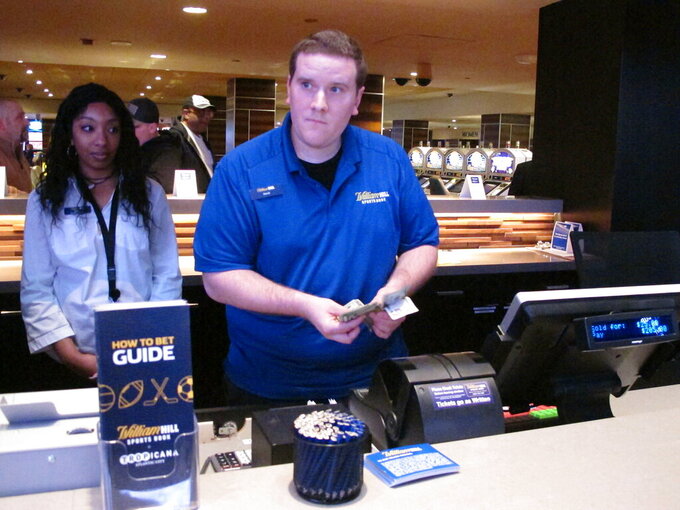 In this March 8, 2019 photo, a clerk counts money wagered by a customer at the sports betting lounge at the Tropicana casino in Atlantic City N.J. Figures released on March 13, 2019 show New Jersey gamblers have wagered almost $2 billion on sporting events since it started nine months ago. (AP Photo/Wayne Parry)

ATLANTIC CITY, N.J. (AP) — Nearly $2 billion has been wagered on sporting events in New Jersey in the nine months since such betting became legal last year.

New Jersey gamblers plunked down more than $320 million on sporting events in February, led by action on the day of the Feb. 3 Super Bowl and the two days preceding it.

And regulators and gambling industry officials predict the college basketball championship tournament this month will surpass Super Bowl betting in terms of volume.

Online and mobile sports betting revenue accounted for four times the amount of money wagers in person at casinos or racetracks.

The extra money helped Atlantic City's casinos to an increase of nearly 26 percent in gambling revenue in February compared to a year earlier. The casinos kept $12.7 million of bets on completed sporting events after winnings bets and other expenses were paid.

And nearly $750,000 was wagered on the Oscars, with the sports books keeping nearly a quarter of it.

"It's clear the new gaming options and other amenities are continuing to grow the Atlantic City market," said James Plousis, chairman of the New Jersey Casino Control Commission.

Resorts Casino posted the largest percentage increase in gambling revenue in February compared with a year ago, up 24.5 percent to $14.8 million. Caesars was up 10.7 percent to $19.4 million, and the Golden Nugget was up 5.8 percent to $26.5 million. The Golden Nugget, which has seen its revenue and market share increase in recent years, slipped to third place in the Atlantic City market in February, just behind the Tropicana and well behind perennial market leader Borgata.

The Meadowlands Racetrack earned over $8 million in sports betting revenue in February, compared with $774,309 in revenue for Monmouth Park Racetrack.

February was when so-called "futures bets" involving the Super Bowl were settled, meaning money that was taken in by casinos or racetracks as far back as last June was finally accounted for in profit-or-loss statements in February. The payoff of such bets helped drive Borgata to a sports betting loss for the month of nearly $756,000, but the casino said it was pleased with the volume of sports bets its customers made.

Internet betting also continued its steady ascent in New Jersey, with nearly $32 million having been won by online casinos, an increase of more than 44 percent from a year ago.

This story has been corrected to delete an incorrect reference to February being the second-best month for sports betting in New Jersey.