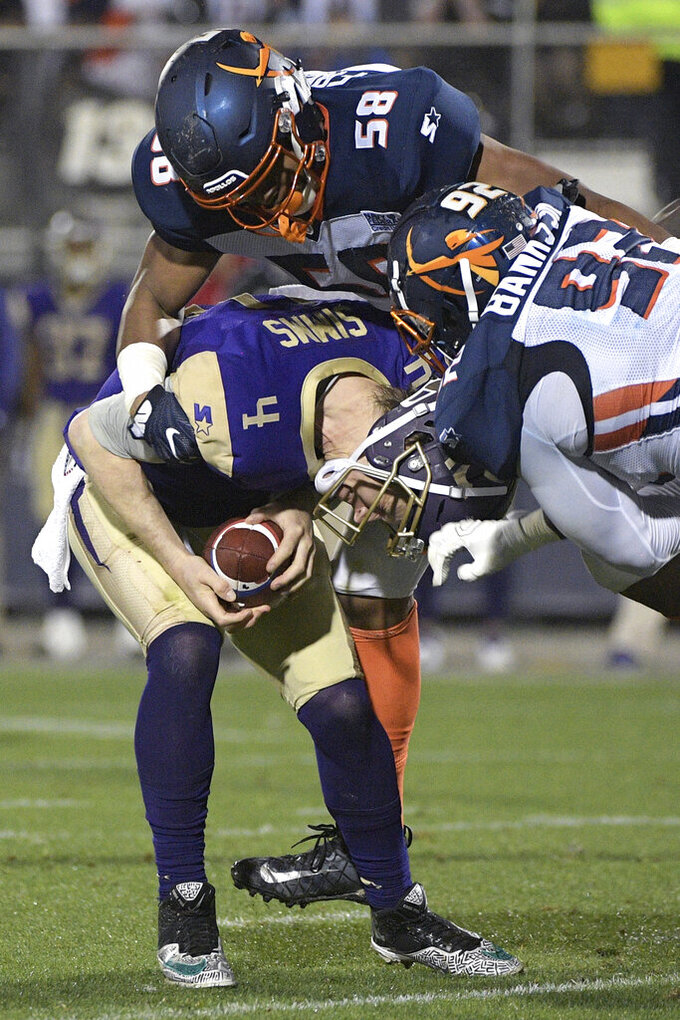 FILE - In this Feb. 9, 2019, file photo, Atlanta Legends quarterback Matt Simms (4) is sacked by Orlando Apollos linebacker Christian French (58) and Josh Banks Sr. (92) during the first half of an Alliance of American Football game, in Orlando, Fla. The new Alliance of American Football's Atlanta Legends are winless after three games and struggling to establish their offense behind quarterback Matt Simms after the unexpected exits of coach Brad Childress and offensive coordinator Micheal Vick before the season. (AP Photo/Phelan M. Ebenhack, File)

ATLANTA (AP) — The new Alliance of American Football's Atlanta Legends are winless after three games and last in the league in scoring.

Put some of the blame on a coaching staff that keeps changing.

Childress, an offensive analyst with the Chicago Bears in 2018 and former Minnesota Vikings coach, planned to call plays. Childress also planned to serve as a mentor for Vick, the former Atlanta Falcons and Philadelphia Eagles quarterback who had no previous coaching experience. Vick is pursuing a new career as an NFL TV analyst.

"I think some of the stuff we had communication wise was a little different with the situation we had to deal with this weekend," Simms said after Atlanta's 28-12 loss to Birmingham. "I don't think that anyone really anticipated that our offensive coordinator would leave two days before the game."

That includes AAF co-founder Bill Polian, who attended Sunday's game and clearly was disturbed by the coaching instability. Polian wouldn't reveal how he planned to fix what he described as Atlanta's "jumbled-up puzzle."

"It's our job to help them straighten that puzzle out, and we will," he said.

The Legends could name a new offensive coordinator this week.

The reported paid attendance for the home opener at Georgia State Stadium, the remodeled former home of the Atlanta Braves, was 10,717.

The upheaval, clearly, is not a good look for the new league.

"Anytime you have the type of coaching turnover on a staff that they've had, it puts a burden on all the other coaches," Polian said. "It's disruptive, it disrupts the flow of information to the players. It's disquieting to players. It's hard."

Atlanta ranks last in the league with its average of 10 points a game. The Legends committed four turnovers and didn't score in four red-zone possessions against Birmingham.

Vick told The Associated Press on Monday his work with Fox TV through the Super Bowl prevented him from committing the time necessary to coach with the Legends, especially after Childress left the team.

"Anything I sign up for and get involved in, I want to do it at the highest level and be the best at it," Vick said, adding "the timing was sort of off" with the Legends. He said he will have a consulting role with the AAF and said "I would love to coach football at some point in my life."

Vick attended Sunday's game and was introduced as a "legend of the game."

Simms played a combined four games with the New York Jets in 2013-14 and spent time with the Buffalo Bills and Falcons from 2015-17. He threw three interceptions and one touchdown pass against Birmingham while completing 28 of 48 passes for 328 yards.

"At the same time, too, I think the team is doing a really good job of rallying together and understanding the situation and knowing that we're doing the best that we can do with the hand we've been dealt at the moment."

Coyle was promoted from defensive coordinator following the departure of Childress.

"I said to Kevin before the game, he needs a bulldozer to get rid of all the junk that's been heaped upon his head since training camp," Polian said. "Yes, it's disruptive but we're taking steps to make sure that we clean that up and that it will be better going forward."