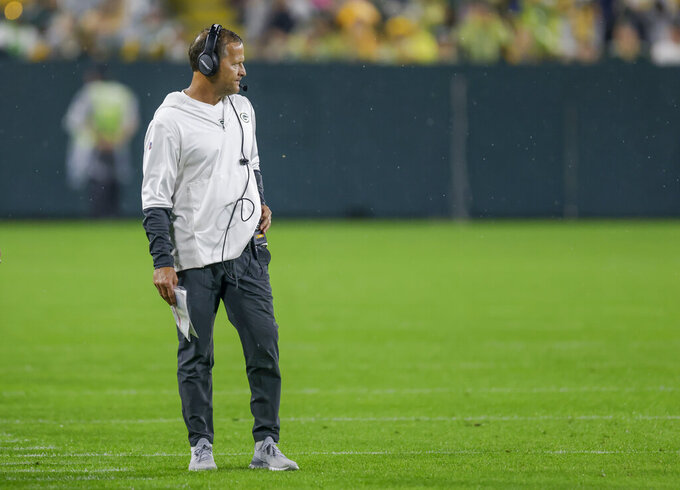 GREEN BAY, Wis. (AP) — New Green Bay Packers defensive coordinator Joe Barry can only hope his players display the same spirit on the field that he brings to meetings and practices.

Barry, 51, was discussing tackling techniques during a meeting when he gave an impromptu demonstration by hitting the ground and essentially tackling the air.

“It was amazing to see,” Alexander said. “He got right back up. His glasses were still on the shirt. It was cool, man.”

Even if it didn’t turn out quite the way Barry had planned.

“In the moment, I just flailed on the ground and rolled,” Barry said. “I actually hit my fricking elbow on the damn ground and that hurt. But the guys loved it.”

Packers coach Matt LaFleur hired Barry to replace Mike Pettine after a 31-26 NFC championship game loss to the Tampa Bay Buccaneers. Barry spent the last four seasons as a linebackers coach for the Los Angeles Rams and worked alongside LaFleur there in 2017.

“I firmly believe, let’s be consistent and let’s bring energy, Barry said. “And hopefully that translates, from a player standpoint, to great effort.”

Barry can hope it will translate to better results than his defenses produced in his two previous stints as a coordinator — with Detroit from 2007-08 and Washington from 2015-16.

The Lions ranked last in the NFL teams in total defense and scoring defense in both of Barry's seasons — and in 2008, Detroit didn't win a single game.

Washington was near the bottom of the league in both yards allowed per play and per game in both of Barry's seasons.

Barry said earlier this year he has “scars” from those previous stops and noted how adversity can lead to growth. Packers outside linebacker Preston Smith played on Barry’s Washington defenses.

Barry is working with much more firepower in Green Bay than he had in Detroit or Washington.

“They’re all into ball,” Barry said. “They love football. They’re passionate about it. They want to succeed. They want to have success. They want to win. They want to play great team defense. They don’t care who gets the credit. I don’t want to say it’s been easy, but they’ve been a great group to work with so far.”

The feeling has been mutual.

“He loves life,” defensive back Chandon Sullivan said. “He loves football. He’s energetic. He brings that passion every day. He just challenges guys to be great every day and never get complacent. Cool dude.”

Outside linebacker Rashan Gary says he likes the freedom that Barry’s scheme gives to players. Gary also noted that Barry’s high-energy style makes it easier for players to push themselves.

“If we don’t have the juice one day, he’s bringing it, so we’re always working and always pushing to be consistent,” Gary said.

Barry says that’s always been his style. He was brought up to coach that way.

When he was asked to name what coaches had influenced his approach, he mentioned eight different names in a detailed answer and started with his father (former college and NFL assistant Mike Barry) and his high school coach ( Colorado Sports Hall of Fame inductee Sam Pagano ).

“I try to approach every day exactly the same way,” Barry said. “I think I’m fairly passionate and energetic just by nature in my personality. The way I coach, the way I come to work every day, it’s not a conscious thing. It’s just me being me.”