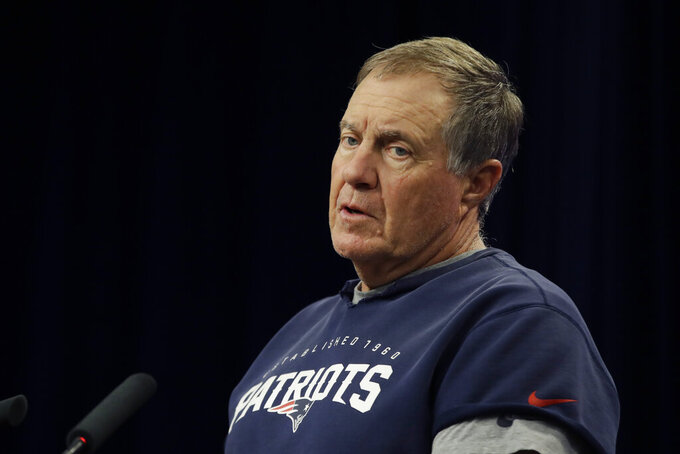 FOXBOROUGH, Mass. (AP) — For nearly a decade, the tight end position was one of the greatest strengths of the New England Patriots' offense.

But that's changed rather quickly.

First came the retirement of Rob Gronkowski, one of the most productive tight ends in NFL history, following the 13-3 victory over the Los Angeles Rams in the Super Bowl. Then their efforts to rebuild the position group have met with obstacles, including injuries and pending league suspensions for two veterans who were seen as short-term replacements for Gronkowski.

As coach Bill Belichick is fond of saying, "It is what it is." At least that's the approach taken by the third-year tight ends coach Nick Caley.

"You work hard every day to control the things that you can control," Caley said. "I've been pleased with everybody we have on board here, obviously. They bring a great attitude every day with them, they work hard and they're all trying to improve."

But it may take some time — perhaps even well into the new season, which begins Sept. 8 at home against Pittsburgh — for the defending Super Bowl champions to get comfortable with their rebuilt tight end corps.

The Patriots convinced Ben Watson, who spent his first six seasons in New England, to come out of retirement after a 15-year career that included stops in Cleveland, Baltimore and New Orleans. But he'll be serving a four-game suspension at the start the season, which he attributed in a Facebook post to the use of testosterone after he left the Saints to assist in healing.

The Patriots also signed former Green Bay veteran Lance Kendricks, but he'll be suspended for the season opener for a marijuana possession charge during his time with the Packers. They also signed veteran Austin Seferian-Jenkins in the offseason only to release him at the start of camp.

Where do they stand? The results won't be known until the final cut on Saturday.

"A lot of it was to see how the competition played out, and that's pretty much what it's been this spring, training camp, preseason games, so we'll continue to do that," Belichick said. "The players that won't be available for a portion or a small portion of the season, it is what it is. We've dealt with that before. A lot of teams in the league have to deal with that, so that's something that's just part of the equation that we will have to figure out."

Most likely, the tight end position will slip a notch in terms of its importance to the offense. Gronkowski, who was a deep-ball threat as well as a devastating blocker, won't be duplicated in one individual. But Caley said he hopes to get results by teaching multiple skills to the players.

"In our offense, we ask those guys to do a lot," he said. "We move them all over the place. We don't want to be one-dimensional in anything we do. From week to week to week, we're going to change as the game plan changes. We're just trying to continue to improve our fundamentals and see how that adapts from week to week."

Izzo, drafted in the seventh round last year out of Florida State, displayed some Gronk-like flair by making an acrobatic 18-yard catch from Tom Brady in the second quarter last week against Carolina, setting up the game's only touchdown.

"I think the mindset for me is just to take advantage of my opportunities," Izzo said. "I'm working every day to be able to try and make those plays."

Saubert, in his third year out of Drake, may be a stronger candidate as a blocking tight end. He's trying to overcome the disadvantage of coming late to a new system.

"Any time you switch to a different system, like grasping the verbiage and the different concepts, it's different at first," he said. "But once you start to pick up on things and develop a rapport, it starts to get a little easier every day."

They also know injuries can result in less practice time, especially when every snap is important in the evaluation process.

"Being available is the most important thing in this league, being healthy and able to be on that field," Izzo said.