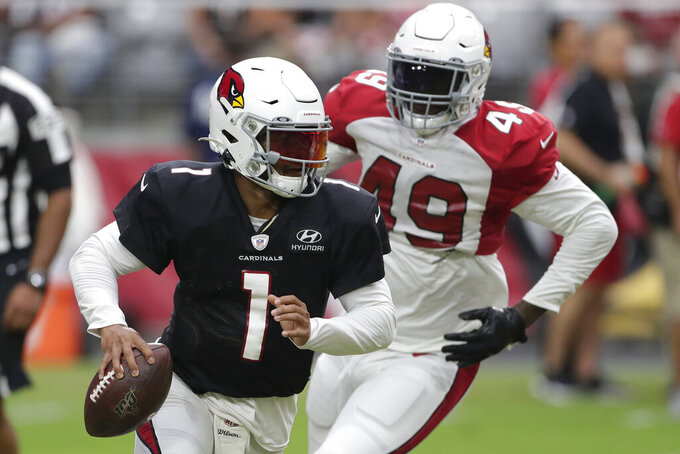 GLENDALE, Ariz. (AP) — The new-look Arizona Cardinals will take the field for the first time in the preseason this week though first-year coach Kliff Kingsbury is being cagey about heralded rookie Kyler Murray.

"You'll have to tune in," Kingsbury said Monday.

Cardinals defensive back Budda Baker said the Los Angeles Chargers might be surprised by the accuracy of Murray's throws.

"Sometimes we're playing Cover 2 and he darts it in there right in between that corner and safety," Baker said. "Also, of course, his speed. People know he's fast, but he's really, really fast."

Arizona also has some other things to look at heading into Thursday night's game, Kingsbury said.

There are penalties from the intrasquad scrimmage Saturday that need to be cleaned up. The Cardinals are also still installing their new spread offense.

"Really focus on our game mechanics during practice and make sure we're sharp on all that," Kingsbury said. "Substitutions, personnel, 40-second clock, really honing in on the little things when it comes to actual game-type situations."

The Cardinals go into the week with some injuries.

Left guard Justin Pugh has a shoulder problem and could be out a couple of weeks, Kingsbury said.

Mason Cole, who started all 16 games at center last season as a rookie but is competing with veteran A.Q. Shipley for the starting job, got some looks at left tackle last weekend and will step in at left guard for Pugh.

Rookie wide receiver Andy Isabella (knee) and safety D.J. Swearinger Jr. (soft tissue injury) could return to practice this week but might not be ready for the game, Kingsbury said.