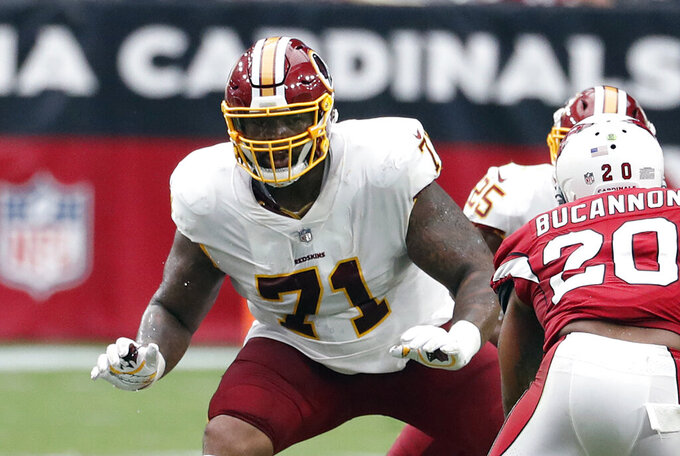 FILE - In this Sept. 9, 2018, file photo, Washington Redskins offensive tackle Trent Williams (71) crouches during an NFL football game against the Arizona Cardinals in Glendale, Ariz. After years of playing in a dysfunctional organization in Washington, the difference in the vibe of a winning franchise hit Williams as soon as he walked into the building for the San Francisco 49ers' training camp. (AP Photo/Rick Scuteri, File)

SANTA CLARA, Calif. (AP) — After years of playing in a dysfunctional organization in Washington, the difference in the vibe of a winning franchise hit Trent Williams as soon as he walked into the building for the San Francisco 49ers this training camp.

Williams saw a culture instilled from management to the coaching staff to the players and an energy he wasn’t used to the past decade in Washington even before the defending NFC champion Niners have held their first real practice.

“Coming where I came from, a walkthrough was a walkthrough,” Williams said. “Our walkthrough here was pretty intense. A lot of focus, a lot of attention to detail and guys flying around. You could tell this is a hungry group of guys and I feel like I fit right in.”

Williams was looking for a place to fit in after growing disgruntled in Washington. He sat out the entire 2019 season because of a dispute with Washington’s front office.

Last November, Williams revealed he had cancer and said that situation led him to distrust Washington’s medical staff and organization as a whole. He said at the time there’s no trust there” with president Bruce Allen, who was fired after a 3-13 season.

The medical staff also was overhauled, and new coach Ron Rivera took control of football operations. But Williams still wanted out and got his wish granted when he was finally traded during the draft to San Francisco.

He was able to reunite with coach Kyle Shanahan, who was offensive coordinator for Williams’ first four seasons in Washington.

He also provided the Niners with the ideal replacement for six-time Pro Bowl left tackle Joe Staley, who informed the team he planned to retire just days before the deal for Williams was struck.

Williams made the Pro Bowl every season from 2012-18 as one of the game’s most athletic and dependable left tackles.

“He’s been an unbelievable guy to work with over the last two weeks or so,” right tackle Mike McGlinchey said. “Even just in walkthrough, you still kind of get a little jaw dropped by how smooth and how much of an athlete he truly is at his size. It’s going to be cool to pick his brain over the next couple of weeks here, going through training camp once live bullets start flying and seeing him back in action.”

Williams acknowledges he has some rust to knock off, which is to be expected considering he hasn’t played a game in more than 19 months and then had to deal with a virtual offseason with a new team this spring.

But he comes in with deep knowledge of Shanahan’s offense from their four years together in Washington and believes the opportunity to go up in practice against San Francisco’s stellar defensive front led by 2019 AP Defensive Rookie of the Year Nick Bosa will only speed his acclimation process.

“He’s going to be a pivotal tool for me to use to knock the rust off,” Williams said. “Probably one of the biggest challenges that I can face all year is Nick. I think he’s one of the top four or five rushers in the game. To get that work and be able to have that every day and we can kind of bounce ideas off each other and talk each other through it. I think it’s going to work out for the best case for me.”

Williams is one of two new potential starters on the offensive line for the Niners this season. The team also signed his former teammate in Washington, Tom Compton, to compete for the starting right guard spot.

Compton is fighting for that spot with Daniel Brunskill, who started two games at guard in place of Mike Person late last season. Person also retired this spring.

Rookie Colton McKivitz also could be in the mix in a season where adaptability will be crucial because of the lack of offseason work and the potential of absences because of the COVID-19 pandemic.

“Versatility is going to be absolutely huge,” McGlinchey said. “It’s going to make or break guys having jobs and make or break situations to fill our roster because we can get in any situation at any point this year that we’re not just looking out for injury. We’re looking out for something that we can’t really defend ourselves from at times. To be able to have the ability to plug and play guys in different positions at different times is really going to allow us to keep moving as smoothly as operationally possible.”