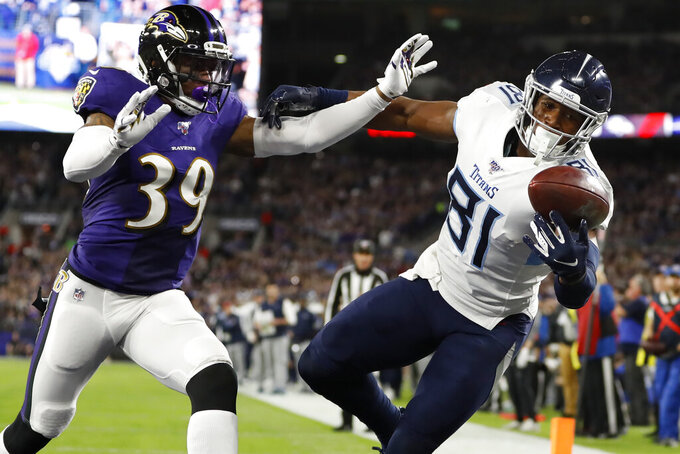 FILE - Tennessee Titans tight end Jonnu Smith (81) makes a touchdown catch against Baltimore Ravens cornerback Brandon Carr (39) during the first half an NFL divisional playoff football game in Baltimore, in this Saturday, Jan. 11, 2020, file photo. The Patriots have agreed to sign free agent tight end Jonnu Smith in their biggest move to date to fill the void created by the departure of Rob Gronkowski. Smith, who was selected by the Titans in the third round of the 2017 draft, agreed Monday, March 15, 2021, to a four-year, $50 million deal, his agent Drew Rosenhaus told The Associated Press. (AP Photo/Julio Cortez, FIle)

His first experience with free agency wasn’t without its share of tears.

Coming off his fourth season with the Tennessee Titans, Smith was one of the most sought tight ends on the market, fresh off a 2020 season in which he set career highs in receptions (41), receiving yards (448) and touchdowns (eight).

He expected to get interest but wasn’t sure where it would come from. When he heard that one of the first calls came from the New England Patriots, it got his attention.

Leaving behind the Titans franchise that drafted him in the third round in 2017 and signing a four-year, $50 million deal with the Patriots has placed him near the top of New England’s growing free agent class. Only edge rusher Matt Judon, who was given a four-year, $56 million contract, has been signed for more by New England this offseason.

The Patriots also added former Chargers tight end Hunter Henry to a three-year, $37.5 million deal. The investments are part of an effort to significantly upgrade the tight end position following the departure of Rob Gronkowski and the struggles of the passing offense last season.

In the past two seasons a group of Patriots tight ends that has included Ben Watson, Devin Asiasi, Ryan Izzo, Matt Lacosse and Dalton Keene combined for just 54 catches for 672 yards and three touchdowns.

Smith said he welcomes the opportunity to play alongside Henry, who himself is coming off a career-best 60 catches in 2020.

“I’ve seen the success the Patriots had in the past with two-tight end sets and I’m just confident in their ability to allow us to make plays,” Smith said. “That’s what we’re all there for. So whatever needs to be done, that’s what I’m going to do. ... (Henry's) a great tight end. I’m excited to be out there battling with him, competing with him and making each other better.”

In four seasons with the Titans, the 6-foot-3, 250-pound Smith garnered praise around the league for his ability to not only catch the ball but for his creativity in the open field once the ball was in his hands.

In the run up to the AFC wild-card matchup between New England and Tennessee in 2019, Patriots coach Bill Belichick called him “probably the best in the league” at gaining yards after the catch.

“As a player, man, I take everything with a grain of salt, I don’t get too deep into things good or bad, because at the end of the day I’ve got to go out on the field and perform at a certain level and that’s all that matters,” Smith said. “Coming from him, of course, you can’t maybe take that with a grain of salt. It was definitely a pleasure coming from him.”

Being hard to bring down was a staple of what made Gronkowski such a weapon in New England. It’s something Smith said he’s always taken pride in, going “all the way back to elementary (school) and Pop Warner.”

“Back in the day we called it ‘stop the Mo’ — you couldn’t tackle the guy, but you had to stop his motion,” Smith said. “Growing up in the church yard playing those games, me and my friends, I guess it translated — never let the first guy bring you down.”

It’s that mentality that the Patriots are also hoping he brings to New England.

To get a jump start on building some early chemistry, he’s already had conversations with QB Cam Newton, who he plans to work out with soon.

“It was a great conversation. He gave me a warm welcome. He’s a hell of a guy,” Smith said. “He’s a competitive man. I’ve known that since I’ve watched him in college. I’m excited to go out there and compete with him.”

NOTES: The Patriots signed defensive lineman Davon Godchaux and re-signed kicker Nick Folk. Godchaux, who spent the past four seasons in Miami, inked a two-year, $16 million deal. Folk appeared in all 16 games in 2020 and signed a one-year, $1.6 million contract. In addition, the Patriots released kicker Justin Rohrwasser, along with linebackers Cassh Maluia and Michael Pinckney.