Newton, Jones star at QB for Patriots in 35-0 rout of Eagles 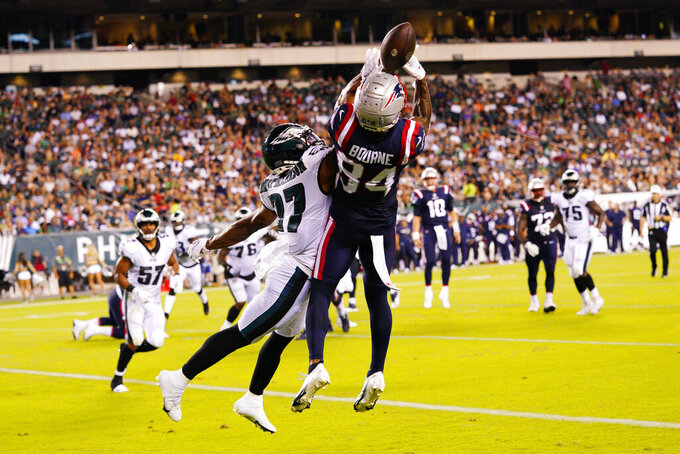 PHILADELPHIA (AP) — Cam Newton resumed his habit of tossing the ball to fans after New England scored touchdowns. It's his way of showing appreciation to fans, especially after a season where most were forced to stay home.

“Hopefully, there will be a lot of Sunday giveaways to look forward to in the upcoming season,” he said.

Newton passed for 103 yards and a touchdown, Mac Jones threw for 146 yards and the New England Patriots routed the Philadelphia Eagles 35-0 on Thursday night.

Newton seemingly has a grasp on the starting spot and should have plenty of chances to toss a souvenir into the stands. He took most of the first-team snaps in training camp and got the start in the second preseason game. Newton, the 2015 NFL MVP, was 8 of 9 and his only incompletion was a dropped pass.

Newton was signed last season to replace Tom Brady. He has no intention of getting replaced after one season by Jones.

Trying to leave no doubt he’s worthy of the No. 1 job, Newton rebounded from a sluggish preseason opener and had completions of 23 and 18 yards and hit Jakobi Meyers on a 28-yard touchdown pass for a 13-0 lead — against second-team defense.

Patriots coach Bill Belichick drafted Jones, out of Alabama, with the 15th overall pick in April’s draft, making him the first quarterback selected in the first round during Belichick’s 21-year tenure in New England. Jones was sharp in his extended play and he tries to push Newton for the starting spot — or least show he'll be an able backup. He completed 13 of 19 passes and showed poised in the pocket and had good command of the offense.

At least the Patriots (2-0) got looks at their quarterbacks.

The Eagles (0-2) played without starter Jalen Hurts, a late scratch because of an unspecified illness (the Eagles said it was not COVID-19 related). Hurts seemed fine when he danced on the field during warmups.

Hurts went to the hospital because of abdominal pain. He was discharged.

“For a guy like that to tell us, he's a tough guy, it must have been hurting him pretty good,” Eagles coach Nick Sirianni said.

He lost his chance to play with first-round pick DeVonta Smith. Smith did not play in the preseason opener because of a knee injury but returned to limited action this week in drills. The Eagles moved up two spots in the first round to select the reigning Heisman Trophy winner with the No. 10 overall pick.

He caught two passes for 19 yards against the Patriots and looked healthy in his limited action.

“It felt good to get back out there, get in a groove. I’m feeling good,” Smith said.

With Hurts out, the Eagles turned to Joe Flacco and he did little in his first preseason start. Flacco was 10 of 17 for 83 yards and one interception.

The Eagles and Patriots held two-day joint practices this week in Philadelphia.

The Eagles rested most of their starters and New England picked apart the backups.

“Just because we’re not playing our starters or showing our looks, that’s no excuse. You want to compete,” Sirianni said.

Rhamondre Stevenson ran for a pair of 1-yard touchdowns and J.J. Taylor also had a 1-yard score. Damien Harris added a 5-yard TD run and the Patriots ran away with this one early. The Eagles were booed off the field at halftime.

Eagles K Jake Elliott sat out with an injured ankle. That left the Eagles without a kicker — and they failed to convert on a third-and-three from the 9-yard line in the first half.

Eagles injured offensive lineman Landon Dickerson, a second-round pick, turned some heads when he showed up shirtless in overalls, wearing a cowboy hat and cowboy boots.

Eagles TE Jason Croom was carted off the field with a knee injury ... Eagles S K’Von Wallace left with a groin injury. ... Patriots WR N’Keal Harry left with an apparent shoulder injury suffered when he dropped an open deep pass and crashed to the ground.

The Patriots finish the preseason Aug. 29 against the New York Giants.

The Eagles wrap up the preseason Aug. 27 against the New York Jets.