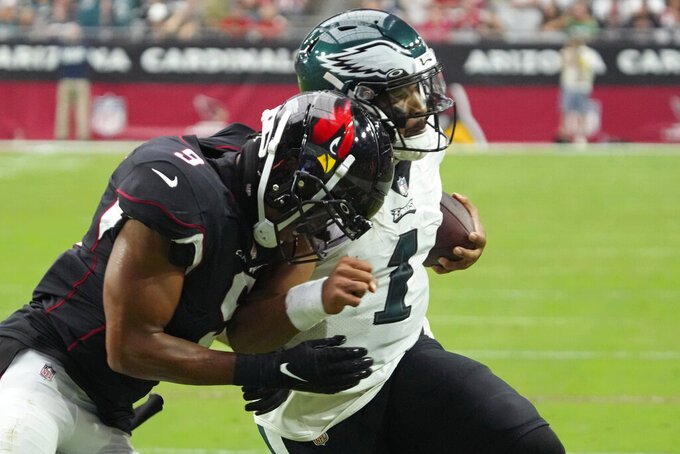 OPENING LINE: Eagles by 5 1/2, according to FanDuel SportsBook.

TURNOVER DIFFERENTIAL: Cowboys plus-5; Eagles plus-9.

EAGLES PLAYER TO WATCH: QB Jalen Hurts has won eight consecutive regular-season games, the longest active streak in the NFL. This season, Hurts has been giving defenses fits with his arm and his legs. Hurts has passed for 1,359 yards and four TDs and has run for 266 yards and six TDs this season. He’s turned the ball over just twice while accumulating a 97.4 QB rating. The NFC Offensive Player of the Month for September, Hurts is tough to stop in short yardage and converted six QB sneaks against the Cardinals.

COWBOYS PLAYER TO WATCH: Whoever plays quarterback. Dak Prescott hasn’t played since fracturing his right throwing thumb in the season-opening 19-3 loss to Tampa Bay. While Prescott has been recovering from surgery, Cooper Rush has led Dallas to four straight victories. Rush’s numbers aren’t prolific, but his play has been efficient and effective. During the winning streak, Rush is 65 for 105 with four TDs and zero INTs while being sacked five times. The Cowboys beat the Rams last week despite Rush passing for just 102 yards. Prescott, now in his seventh season after winning the 2016 NFL Offensive Rookie of the Year, did light throwing at the end of Wednesday’s practice. Coach Mike McCarthy said prior to practice that the Cowboys were preparing for Rush to start for the fifth straight week, but the coach stopped short of a definitive statement about who will be starting at QB.

KEY MATCHUP: Eagles defensive front vs. Cowboys rushing attack. Running backs Ezekiel Elliott and Tony Pollard combined to rush for 164 yards on 30 carries in last week’s win over the Rams. Even if Prescott returns, it’s likely that the Eagles will see a healthy dose of Dallas rushing. Philadelphia has allowed an average of 105 yards per game on the ground this season, ranking 10th in the NFL. ... Also keep an eye on Philadelphia’s offensive line against Dallas’ pass rush. The Eagles have one of the best five-man fronts in the league, but they have been battling injuries of late. LT Jordan Mailata (shoulder) sat out against the Cardinals, LG Landon Dickerson (ankle) left in the first quarter against Arizona and C Jason Kelce tweaked his ankle in the game. All three were limited participants in Wednesday’s practice. Philadelphia will need to be ready for the Cowboys, who rank second in the NFL with 20 sacks. Cowboys OLB Micah Parsons, the NFL Defensive Rookie of the Year, is tied for the league lead with six sacks.

KEY INJURIES: In addition to the three starting offensive linemen, Eagles K Jake Elliott (right ankle) was a limited participant on Wednesday. Elliott sat out last week’s game against Arizona. Parsons (groin) was a non-participant in Wednesday’s practice but told reporters he would play on Sunday. Dallas T Jason Peters (chest/rib), a former Eagle, spoke optimistically about his chances of returning on Sunday after missing last week’s win over the Rams.

SERIES NOTES: The Cowboys have won three straight and seven of nine in the series against their longtime NFC East rivals.

STATS AND STUFF: Philadelphia is 5-0 for the third time in franchise history. The Eagles started 7-0 in 2004 when they finished 13-3 in the regular season before falling in the Super Bowl to the Patriots, and began 6-0 in 1981, but dropped their first playoff game. ... The Eagles’ plus-47 point differential is tied for first in the NFC and their 11 takeaways (6 INTs, 5 fumble recoveries) lead the league. … Eagles K Cameron Dicker hit a game-winning 23-yarder with 1:42 left against the Cardinals while filling in for regular kicker, Elliott. Dicker also hit a 42-yarder. ... Free-agent signee Haason Reddick leads the Eagles with 4½ sacks. Philadelphia’s defense has 17 sacks, fourth most in the NFL. ... Philadelphia RB Miles Sanders has rushed for 414 yards, and TE Dallas Goedert has caught 24 passes for 335 yards to rank fourth and third, respectively, among their positions in the NFL. ... Philadelphia has 58 plays with pass completions of 16 or more yards or rushes of 10 or more yards, most in the NFL. ... Kelce has started 127 straight regular-season games. ... Prescott is 7-3 against Philadelphia.

FANTASY TIP: Eagles WR A.J. Brown was quiet in last week’s win over the Cardinals, catching just three passes for 32 yards. Bank on Hurts wanting to get Philadelphia’s top receiver more involved against the Cowboys. Brown, whom the Eagles signed for four years and $57 million guaranteed after a draft-day trade with the Titans, is fifth in the NFL with 436 receiving yards but has just one TD. Look for Brown to get into the end zone against Dallas.