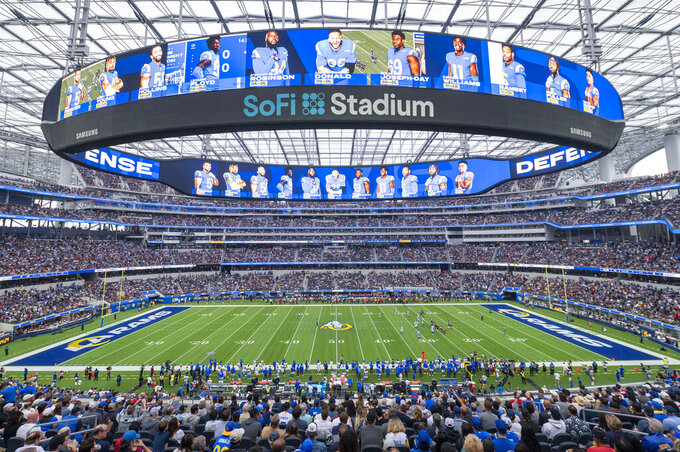 FILE - This is a general overall interior view of SoFi Stadium as the Los Angeles Rams takes on the Tampa Bay Buccaneers in an NFL football game Sunday, Sept. 26, 2021, in Inglewood, Calif. A late-season surge in COVID-19 cases had the NFL in 2021 looking a lot like 2020, when the coronavirus led to significant disruptions, postponements and changing protocols. The emerging omicron variant figures to play a role all the way through the playoffs, including the Super Bowl in Los Angeles, where California has always been aggressive with policies to combat the spread of the virus. (AP Photo/Kyusung Gong, File)

Last year the NFL had a team play in its home stadium in a Super Bowl for the first time. On Sunday, the league will see another first that does put a delay in some of their preparations for this year's big game.

The NFC championship game between the Los Angeles Rams and San Francisco 49ers marks the first time that a conference title game is taking place at the Super Bowl venue. Katie Keenan, the NFL's Senior Director of Event Operations, said that the league had prepared for that contingency, but that it has delayed what work they can do inside SoFi Stadium.

“It puts us back a couple of weeks in certain areas, but we’ve still been able to do a lot of prep work that we started earlier in January,” Keenan said.

While the Tampa Bay Buccaneers made history last year for the Super Bowl, all three of their NFC playoff games were on the road. The Rams won the NFC West, which guaranteed them at least one postseason game.

The league began its work at the Hollywood Park site on Jan. 10, the day after the regular season. Some of the scaffolding work with tents and other hospitality areas were evident when the Rams hosted the Arizona Cardinals in an NFC wild-card round game on Jan. 17.

More fence lines, auxiliary lighting and Super Bowl decor will be up on Sunday, but the league and Rams have worked together to make sure it won't severely impact parking. Some of the hospitality facilities for the Feb. 13 game are being pre fabricated and will be installed beginning Monday.

Most of the actual work inside the stadium will not begin until Monday. Normally at this point, the international broadcast booths and other media areas would almost be set up, but it hasn't happened because it would involve the removal of some seats.

Keenan did say that some of the prewiring for those have been installed.

“When you have a five-week build pushed into two weeks there’s just some things you have to get started earlier,” she said.

Keenan also said that her staff has used the experiences from Minnesota four years ago to get better with contingency planning. In 2018, the Vikings had a home game in the divisional round, which was three weeks before the Super Bowl.

“This site is so sprawling that we're able to build on the campus. We're getting better and better at this because it seems like the past couple of years the potential playoff team has been the Super Bowl host city,” she said.

“Starting in November we started to build contingencies around each round. It’s no secret that the championship game scenario is the most challenging scenario because it obviously shortened everything.”

The one advantage SoFi Stadium does have is that it is an artificial surface, meaning the league doesn't have to install a new field. Starting on Monday though, the NFL will have the building all to itself.

“It is like putting a puzzle together because a lot of things that are traditional SoFi and Rams related have to move out, and then all of our stuff has to move in. It will be quite the orchestrated effort on Monday morning when we can hit the ground,” Keenan said.