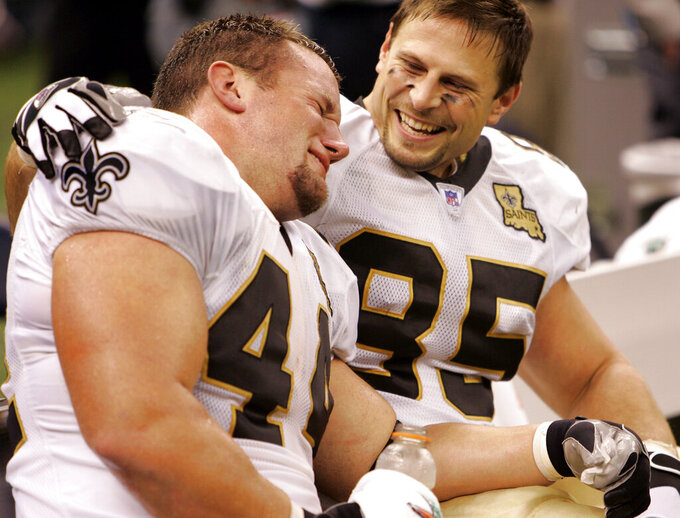 FILE - In this Sept;. 25, 2006, file photo, New Orleans Saints fullback Mike Karney, left, is consoled by teammate Ernie Conwell as he weeps at the end of a 23-3 win over the Atlanta Falcons at the newly re-opened Louisiana Superdome in New Orleans. This one couldn't have been scripted any better for a team that spent all of last season on the road, and it couldn't have come at a better time for a city that is still struggling to overcome the devastation of Hurricane Katrina. (AP Photo/Alex Brandon) 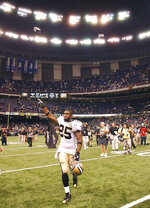 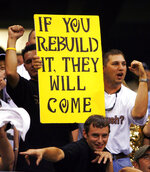 As part of its celebration of its 100th season, the NFL is designating a Game of the Week, each chosen to highlight a classic matchup. For this week, it is the Falcons-Saints game.

To mark each Game of the Week, the AP will be reprinting its story of a classic matchup in the rivalry. The following is the story from the Falcons-Saints game from Sept. 25, 2006. It was the Saints' first game back at the Superdome after Hurricane Katrina.

NEW ORLEANS (AP) — The Superdome got a new roof after Hurricane Katrina. The New Orleans Saints did their best to blow it off again.

In an earsplitting return to their rebuilt stadium, the Saints gave the Big Easy something to cheer about — an undefeated football team that made it look easy with a 23-3 victory against the Atlanta Falcons last night.

This one couldn't have been scripted any better for a team that spent all of last season on the road, and it couldn't have come at a better time for a city that is still struggling to overcome the devastation of Hurricane Katrina.

After a Super Bowl-like pregame show that included a performance by super groups U2 and Green Day, the Saints wasted no time turning their welcome-home party into Mardi Gras: The Falcons' first drive stalled, and special teams demon Steve Gleason sliced through the middle of the Atlanta line to smother Michael Koenen's punt.

The ball skidded across the goal line, where Curtis Deloatch fell on it for a touchdown — the first given up by the Falcons this season. Just 1½ minutes into a homecoming that was over a year in the making, the Saints sent an emphatic message to the NFL and the entire country.

New Orleans is back.

DeLoatch ran over to the stands and pointed at the crowd of 70,003, as if to say, "Take that Katrina!" Undoubtedly, many more were cheering around this still-recovering city, some of them vowing to set up televisions outside government-issued trailers that pass for homes more than a year after the storm blew ashore, the levees broke and the water poured through.

The Saints (3-0) poured it on against the Falcons (2-1), who fell behind, 14-3, in the first quarter and never recovered. Devery Henderson scored New Orleans' second touchdown on an 11-yard double-reverse, taking a handoff from Reggie Bush and cutting inside the pylon with help from a gutsy block by quarterback Drew Brees.

John Carney kicked two field goals in the second period, including a 51-yarder that cleared the crossbar as time ran out. The Saints trotted to the locker room with a 20-3 lead and a rousing ovation ringing in their ears. The Falcons straggled off in the opposite direction, as if they already knew this wasn't going to be their night.

Of course, it seemed that way even before the kickoff. This was intended to be a showcase for New Orleans' rebirth, as frustrating and halting as that process has been for so many.

Fans clad in gold and black strolled around the French Quarter throughout a brilliantly sunny day, ready to look forward instead of looking back at those awful scenes of suffering inside the Superdome in the days after Katrina. Those who had tickets to get inside the 31-year-old stadium found it spruced up with new scoreboards, bright video boards and plenty of fresh paint, all part of a $185 million renovation that was designed to keep the Saints from moving to San Antonio, Los Angeles or some other NFL-deprived city.

Showing the significance of the game, both former commissioner Paul Tagliabue and his successor, Roger Goodell, were at the Superdome.

Signs were hung throughout the stadium, sending messages such as "Home Sweet Dome" and "Thank You America. New Orleans & Saints Are Here to Stay."

After Bono left the stage and former President George Bush handled the coin flip, the Saints made sure the party would last all night. They dominated on special teams — also blocking a short field goal attempt by 46-year-old Morten Andersen — and shut down Atlanta's feared running game.

The Falcons, coming off a franchise-record 306 yards on the ground against Tampa Bay, managed just 117 yards rushing on the inspired Saints. Michael Vick had a miserable game, completing 12-of-31 for 137 yards.

Any hopes of an Atlanta comeback were snuffed out on the first possession of the second half. New Orleans took the kickoff and drove 73 yards in 12 plays, burning more than 7½ minutes off the clock before settling for Carney's third field goal from 20 yards.

Not the Falcons. Not on this night.

Alge Crumpler, the team's normally sure-handed tight end, dropped a pass in the end zone with no one around him in the first quarter. Andersen, still reviled in New Orleans for leaving to sign with the rival Falcons more than a decade ago, had a 25-yard chip shot swatted away by Josh Bullocks on the night the kicker became the second-oldest player in NFL history.

Even the referees chipped in, picking up a flag on a dubious pass interference call that could have extended a Falcons drive late in the third quarter.

About the only thing that didn't go right for New Orleans was a first touchdown for Bush. Still, "Saint Reggie" gave the fans several chances to cheer for their rookie sensation, rushing for 53 yards and catching four passes for 19 yards.

Deuce McAllister handled the bulk of the running, running 19 times for 81 yards. Brees was 20-of-28 passing for 191 yards. His favorite receiver was Marques Colston, who grabbed seven passes for 97 yards.

The Saints seized first place all to themselves in the NFC South while matching their wins from all of last season. Forced to play in San Antonio, Baton Rouge and East Rutherford because of the Superdome's massive damage, New Orleans struggled to a 3-13 record as a team without a home.