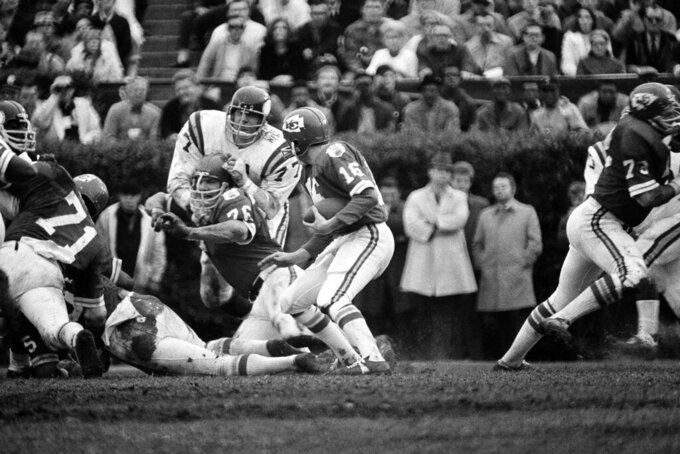 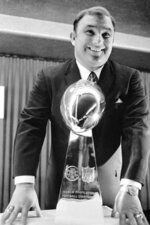 As part of its celebration of its 100th season, the NFL is designating a Game of the Week, each chosen to highlight a classic matchup. For this week, it's the Vikings-Chiefs game.

To mark each Game of the Week, the AP will be reprinting its story of a classic matchup in the rivalry. The following is the story from the last Super Bowl with the NFL and AFL as separate leagues, Super Bowl 4 between the NFL champion Minnesota Vikings and AFC champion Kansas City Chiefs.

NEW ORLEANS (AP) — Len Dawson, under tremendous pressure because his name has been linked in a nationwide gambling investigation, directed the underdog Kansas City Chiefs of the American Football League to a 23-7 victory over the Minnesota Vikings Sunday in the last Super Bowl game between champions of separate leagues.

Playing their final games as representatives of the AFL, after finishing second in regular season play, the Chiefs bottled up Minnesota's vaunted running game and controlled the football before a sellout crowd of more than 81,000 at Tulane Stadium.

Jan Stenerud, the Norwegian soccer-style ace, kicked field goals of 48, 32 and 25 yards and Mike Garrett scored once on a five-yard run for a 16-0 halftime lead.

After the Vikings struck back for a touchdown by Dave Osborn on a four-yard run in the third quarter Dawson put the game away with a 46-yard pass to Otis Taylor, who made two fine moves en route to the clinching touchdown.

This was the last pure Super Bowl because the leagues merge officially Feb. 1 and future contests will be between the champions of different conferences of the combined national football league.

The Chiefs' superb defense, led by Curley Culp at left tackle, clamped down on the ground game the Vikings used to march to the NFL title and forced Joe Kapp to go to the air in catch-up football.

In the final quarter the Chiefs intercepted two of Kapp's long desperate passes and also picked off one on Gary Cuozzo who took over after Kapp left with damaged ribs and elbow.

The pro NFL-crowd in the hometown of the New Orleans Saints had come to cheer the 13-point favored Vikings but left praising Coach Hank Stram's rugged Chiefs with their varied offense and solid defense.

The bitter rivalry between the two clubs, fighting for $15,000 winning shares and $7,500 losing shares, flared briefly in the final minutes when fists flew in an exchange near the Vikings' bench. The NFL champs were penalized 15 yards, a personal foul on Alan Page.

Dawson's name was plastered across front pages of the nation last week with four other pro football figures in connection with an alleged gambling investigation. Unconfirmed reports said he and others would be subpoenaed to appear in Detroit. It was denied on all sides and commissioner Pete Rozelle said the 34-year-old quarterback was clean.

When Dawson left the game with less than a minute to go he drew a rousing cheer from the crowd.

As the game ended, Coach Stram was carried off the field, which is the site of the annual Sugar Bowl game each New Year's Day.

Dawson, who ran the Chiefs through a variety of plays out of their I-formation, including a most successful end-around by Frank Pitts that worked three times, was named the outstanding player of the game.

The trend of this game became obvious in the first period. The first time the Chiefs got the ball they moved close enough for Stenerud to kick a 48-yard field goal, a Super Bowl record.

The next time Kansas City got control, the Chiefs moved in range for another field goal by Stenerud from the 32. The Norwegian, who came to Montana State on a ski scholarship, added his third field goal for a 9-0 lead at 7:06 of the second period.

Kansas City operated out of the I-formation most of the day with tight end Fred Arbanas directly behind quarterback Dawson and with Pat Holmes and Garrett behind him. The Chiefs usually shifted Arbanas to the right or left but sometimes ran right out of the original formation. At one stage, Dawson used the shotgun formation in which he takes a direct pass from center.

If there was a key to the game it was the ability of the Kansas City defense, which led the AFL, to stop Osborn and Bill Brown, the top Viking runners. Kapp, who operates at his best when he can pass as a counterpart to a successful running game, was forced to take desperate chances.

The Chiefs' defense blanketed the Viking receivers so tightly in the first half that in one series of three plays, Kapp completed three passes, gained only eight yards and had to call a punt.

At halftime, the leading rusher was Pitts, the split end, who carried the ball only on the end-around plays that confused the Vikings. He wound up with 37 yards on three carries, second only to Garrett's 39 on 11 carries for the new world champs.

The Kansas City front four dumped the Vikings' quarterback twice and the publicized Purple Gang of Minnesota smeared Dawson twice. However, it was the ability of the Chiefs' front four and the linebackers to keep the Vikings' offensive line from opening holes for Osborn and Brown that controlled the game.

The Chiefs, underrated by many because they finished second to Oakland in regular AFL play, had advanced to the finals by eliminating the defending champion Jets, 13-6, Dec. 20 and then knocking off Oakland last week, 17-7. Minnesota had reached the finals by beating Los Angeles 23-20 and then taking the NFL title game from Cleveland last Sunday, 27-7.

This was the fourth of the Super Bowl tests between the two league champions since they agreed to merge. Green Bay won the first two, beating Kansas City in the first game in 1967, 35-10. The Packers downed Oakland in 1968, 33-14. The Jets gained equal status for the AFL last year in Miami by upending Baltimore 16-7.

Kansas City ran for 151 yards while holding the Vikings to 67 and controlled the ball 61 plays to 50 for Minnesota. The Vikings passing game netted 172 to the Chiefs' 122.

Dawson completed 12 of 17 for 142 yards and one touchdown and was intercepted once. Kapp, who suffered an injury to his left shoulder, hit with 16 of 25 for 183 yards but had two interceptions.

Taylor caught six of Dawson's passes for 81 yards, including the big one for 46 on which he escaped Earsell Mackbee with a fine move that left the defender on the ground and then maneuvered past Karl Kassulke on the sidelines on his way to the touchdown.