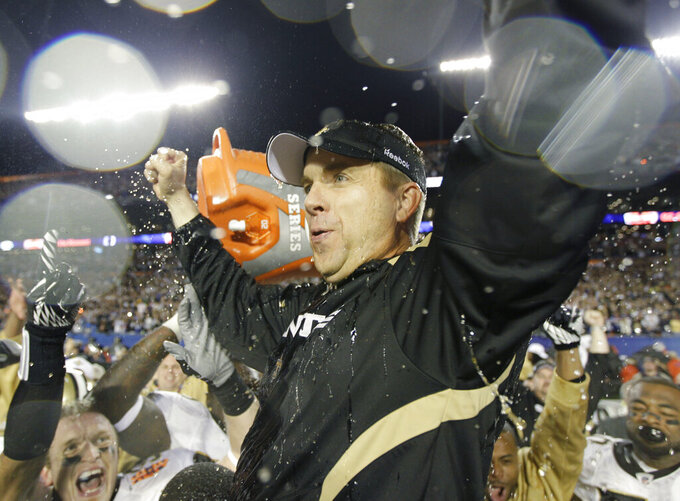 FILE - In this Feb. 7, 2010, file photo, New Orleans Saints head coach Sean Payton celebrates after the NFL Super Bowl XLIV football game against the Indianapolis Colts, in Miami. The Saints beat the Colts 31-17. As part of its celebration of its 100th season, the NFL is designating a Game of the Week, each chosen to highlight a classic matchup. For this week, it is the Colts-Saints game. (AP Photo/David J. Phillip, File)

As part of its celebration of its 100th season, the NFL is designating a Game of the Week, each chosen to highlight a classic matchup. For this week, it is the Colts-Saints game.

To mark each Game of the Week, the AP will be reprinting its story of a classic matchup in the rivalry. The following is the story from Super Bowl 44 on Feb 7, 2010.

MIAMI (AP) — The ultimate underdogs, they ain’t. Not anymore. The Saints are Super Bowl champions now. Who Dat? Try Drew Brees, Sean Payton and a team that has reversed its embarrassing past, carrying an entire city to the top with it.

Put away those paper bags forever.

Brees and the Saints rallied to upset Peyton Manning and the Indianapolis Colts 31-17 Sunday night in one of pro football’s most thrilling title games.

“We just believed in ourselves and we knew that we had an entire city and maybe an entire country behind us,” said Brees, the game’s MVP. “What can I say? I tried to imagine what this moment would be like for a long time, and it’s better than expected.”

But not something many expected from these descendants of the hapless Aints, who were 5-point underdogs.

“Four years ago who ever thought this would be happening when 85 percent of the city was under water from (Hurricane) Katrina?” Brees said. “Most people not knowing if New Orleans would ever come back or if the organization and the team would come back. ... This is the culmination of that belief and that faith.”

Brees tied a Super Bowl record with 32 completions, the last a 2-yard slant to Jeremy Shockey for the winning points with 5:42 remaining. He was 32 for 39 for 288 yards.

A surprise onside kick sparked the Saints’ second-half comeback. Their 25th-ranked defense made several key stops, and Tracy Porter’s 74-yard interception return on a pass from Manning clinched it.

Manning tried to give chase, but was blocked by a New Orleans defender and fell awkwardly as the cornerback raced by. The four-time NFL MVP forlornly walked to the sideline as the Big Easy celebrations began.

“It’s time for the Saints to celebrate,” he said. “It’s their field and it’s their championship.”

An NFL also-ran for much of their 43 years, the Saints’ football renaissance, led by Brees and Payton, climaxed with Shockey’s touchdown and Lance Moore’s 2-point conversion catch, originally ruled incomplete but overturned on Payton’s challenge.

Porter’s pick, just as dramatic as his interception of Brett Favre’s pass to force overtime in the NFC title game, was the game’s only turnover. It’s one Manning will forever regret.

The Saints (16-3) won three postseason games this winter after winning only two in the previous 42 years. They beat Arizona, Minnesota and Indianapolis (16-3) — all division winners — for their first title, scoring 107 points and allowing only 59.

“We weren’t the Aints,” Porter said. “We were a team of destiny, a team that can make big plays.”

The championship came 4½ years after Katrina ravaged New Orleans, making the Saints nomads for the 2005 season. There even was some doubt they would return, but the NFL refused to abandon the city. The Superdome was repaired and the Saints won the NFC South in ’06, their first season with Brees and Payton.

That was the season Manning won his only Super Bowl. He got the Colts off a quick start and had them in front for much of this one, but New Orleans’ league-leading offense, which scored 510 points this season, outscored Indy 31-7 after falling behind 10-0. That matched the biggest comeback in a Super Bowl.

Payton held the Vince Lombardi Trophy high over his head and ran into the end zone toward several hundred fans chanting the Saints’ rally cry: “Who dat, who dat, who dat say gonna beat dem Saints?”

Nobody can say it now.

“Everybody back in New Orleans gets a piece of this trophy,” he said.

“I think I could kiss him,” owner Tom Benson said.

Before many of the 74,059 fans got settled following the Who’s halftime show, the Saints worked a little football voodoo. Garrett Hartley’s onside kick was touched by the Colts’ Hank Baskett, then recovered by Chris Reis at the New Orleans 42.

“I just told our guys you’ve got to make me look good on this,” Payton said. “That really becomes like a turnover.”

Looking like the NFL’s most potent offense, the Saints seized the opportunity to take their first lead. It came on Pierre Thomas’ brilliant 16-yard run with a screen pass, capped by a dive into the end zone.

Manning simply shrugged, found Dallas Clark for 45 yards on a 76-yard drive, and Joseph Addai used a spin move a figure skater would envy to score from the 4.

But that was it for Indy.

“I certainly know how it was three years ago when we won,” Manning said. “I know the people of New Orleans and the Saints have that same feeling right now.”

Hartley, the hero of the NFC title game with his 40-yard field goal in OT, made a 47-yarder later in the third period. After Matt Stover was wide left on a 51-yarder early in the final quarter, Brees led the biggest drive in Saints history.

“We really felt as underdogs we had the better team,” Payton said. “To be in that position where maybe a lot of people were picking against us, we liked the spot we were in.”

Manning looked sharp on the Colts’ first two series, taking them 53 yards to a 38-yard field goal by Stover, at 42 the oldest player in Super Bowl history.

Then Manning led a 96-yard, 11-play drive that appeared almost routine, even though it tied the longest march in a Super Bowl. Addai rushed for 53 yards on the series, and Manning found Pierre Garcon behind backup cornerback Osama Young for the 19-yard score on third down.

New Orleans couldn’t match that, but did get a 46-yard field goal by Hartley to make it 10-3. Brees was sacked on third down by All-Pro defensive end Dwight Freeney, who sure looked frisky despite ligament damage in his right ankle that made his availability uncertain for two weeks.

Then Indy’s defense, ranked 18th during the season but staunch in the playoffs, really showed some power. After the Saints marched 71 yards, including 40 yards on two receptions by Marques Colston, New Orleans had third-and-goal at the 1. Mike Bell slipped trying to run right behind All-Pro guard Jahri Evans, and Thomas was stacked up at the line by Gary Brackett and Clint Sessions on fourth down.

But the Colts went against type and ran three times, leaving 35 seconds for the league’s most prolific offense to get in position for Hartley’s 44-yard field goal and a more manageable 10-6 halftime deficit.

Shootout? More like a slowdown. Indy had two three-and-outs and New Orleans had one.

But the points came quickly after halftime — mostly for the Saints.

“Look around the stadium,” linebacker Scott Fujita said. “It was like 6- or 7-to-1 (Saints fans). The black and gold just poured into Miami.

“The whole world was behind us. This was bigger than just a game for the Saints. We are the world’s team.”