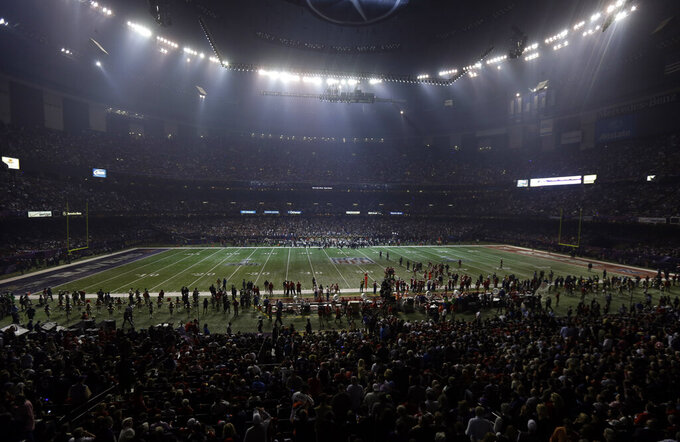 FILE - In this Feb. 3, 2013, file photo, the Superdome is viewed after the lights went out during the NFL Super Bowl XLVII football game in New Orleans. Joe Flacco and the Baltimore Ravens were turning the Super Bowl into a rout when, without even a flicker of warning, the power went off. When the game resumed 34 minutes later, the San Francisco 49ers were the ones playing lights out. (AP Photo/Gerald Herbert, File)

As part of its celebration of its 100th season, the NFL is designating a Game of the Week, each chosen to highlight a classic matchup. For this week, it is the 49ers-Ravens game.

To mark each Game of the Week, the AP will be reprinting its story of a classic matchup in the rivalry. The following is the story from Super Bowl 47 on Feb 3, 2013.

NEW ORLEANS (AP) — Joe Flacco and the Baltimore Ravens were turning the Super Bowl into a rout when, without even a flicker of warning, the power went off. When the game resumed 34 minutes later, the San Francisco 49ers were the ones playing lights out.

Instead of a blowout, the blackout turned the big game into a shootout.

The Ravens survived the frenzied comeback by the 49ers for a thrilling 34-31 win at the Superdome on Sunday night and their second NFL championship in 11 years.

"How could it be any other way? It's never pretty. It's never perfect. But it's us," coach John Harbaugh said after winning the sibling showdown with younger brother Jim. "It was us today."

Leading by 22 points when most of the Superdome lights and the scoreboards went dark early in the third quarter, the Ravens used a last-gasp defensive stand to hold on after the momentum strangely swung to the 49ers. San Francisco receiver Michael Crabtree was bumped in the end zone on the 49ers' final offensive play the contact appeared incidental but coach Jim Harbaugh insisted a penalty should have been called.

"There's no question in my mind that there was a pass interference and then a hold," Jim Harbaugh said.

As for the foul-up at America's biggest sporting event, officials revealed that an "abnormality" in the power system triggered an automatic shutdown, forcing backup systems to kick in. But no one was sure what caused the initial problem.

Everything changed after that, though, until Ray Lewis and Co. shut it down. But there were plenty of white-knuckle moments and the Ravens (14-6) had to make four stops inside their 7 at the end.

For a Super Bowl with so many subplots, it almost had to end with a flourish.

Flacco's arrival as a championship quarterback coincides with Lewis' retirement with a second Super Bowl ring no less. The win capped a sensational month since the star linebacker announced he was leaving the game after 17 Hall of Fame-caliber years.

At 4 hours, 14 minutes, it was the longest Super Bowl ever.

The loss of power left players from both sides stretching and chatting with each other. It also slowed Balti-more's surge, and that was considerable after Jacoby Jones' 108-yard kickoff return and Flacco's three touchdown passes made it 28-6.

Flacco's big start boosted him to the MVP award.

"They have to give it to one guy and I'm not going to complain that I got it," said Flacco, who soon will get a rich new contract. His current deal expired with this win.

Down by three TDs, back came San Francisco (13-5-1) in search of its sixth Lombardi Trophy in as many tries.

"As far as the power going out, that didn't change anything for us," tight end Vernon Davis said.

Yet they got back in the game almost immediately.

Michael Crabtree's 31-yard touchdown reception on which he broke two tackles made it 28-13. A couple minutes later, Frank Gore's 6-yard run followed a 32-yard punt return by Ted Ginn Jr., and the 49ers were within eight.

San Francisco wasn't done challenging, though, and Colin Kaepernick's 15-yard TD run, the longest for a quarterback in a Super Bowl, made it 31-29. A 2-point conversion pass failed when the Ravens blitzed.

Tucker added a 38-yarder with 4:19 remaining, setting up the frantic finish.

Kaepernick couldn't get the 49ers into the end zone on the final three plays, and Ravens punter Sam Koch took a safety for the final score with 4 seconds left. Koch's free kick was returned by Ginn to midfield as time ran out.

The Harbaughs then met at midfield amid the Ravens' confetti-laden celebrations.

"It's very tough," John Harbaugh said, referring to their conversation. "It's a lot tougher than I thought it was going to be. It's very painful."

Only one other championship game in the NFL's 80-year title game history, Pittsburgh's 35-31 win over Dal-las in 1979, featured both teams scoring at least 30 points.

In the first half, Flacco was as brilliant as Tom Brady, Joe Montana or Terry Bradshaw ever were in the NFL's biggest game. The only quarterback to win a playoff game in each of his first five seasons his coach holds the same distinction was nearly perfect. Overall, Flacco threw for 11 touchdowns to tie a postseason record, and had no interceptions.

The Ravens stumbled into the playoffs with four defeats in its last five regular-season games as Lewis re-covered from a torn right triceps and Flacco struggled. Harbaugh even fired his offensive coordinator in De-cember, a stunning move with the postseason so close.

But that and every other move Harbaugh, Flacco and the Ravens made since were right on target. Just like Flacco's TD passes of 13 yards to Anquan Boldin, 1 to Dennis Pitta and 56 to Jones in the first half, tying a Super Bowl record.

New Orleans native Jones, one of the heroes in a double-overtime playoff win at Denver, seemed to put the game away with his record 108-yard sprint with the second-half kickoff.

Soon after, the lights went out and when they came back on, the Ravens were almost powerless to slow the 49ers.

Until the final moments.

"The final series of Ray Lewis' career was a goal-line stand," Harbaugh said.

Lewis sprawled on all fours, face-down on the turf, after the end zone incompletion.

"It's no greater way, as a champ, to go out on your last ride with the men that I went out with, with my team-mates," Lewis said. "And you looked around this stadium and Baltimore! Baltimore! We coming home, baby! We did it!"

It was a bitter loss for Jim Harbaugh, the coach who turned around the Niners in the last two years and brought them to their first Super Bowl in 18 years. His team made a similarly stunning comeback in the NFC championship at Atlanta, but couldn't finish it off against Baltimore.

"Our guys battled back to get back in," the 49ers coach said. "I thought we battled right to the brink of winning."

The 49ers couldn't have been sloppier in the first half, damaging their chances with penalties including one on their first play that negated a 20-yard gain poor tackling and turnovers. Rookie LaMichael James fumbled at the Baltimore 25 to ruin an impressive drive, and the Ravens converted that with Flacco's 1-yard pass to Pitta for a 14-3 lead.

On San Francisco's next offensive play, Kaepernick threw behind Randy Moss and always dependable safe-ty Ed Reed picked it off. A huge scuffle followed that brought both Harbaughs onto the field and saw both sides penalized 15 yards for unnecessary roughness.

Reed, also a New Orleans native, tied the NFL record for postseason picks with his ninth.

Baltimore didn't pounce on that mistake for points. Instead, Tucker's fake field goal run on fourth-and-9 came up a yard short when Chris Culliver slammed him out of bounds.

The Ravens simply shrugged, forced a three-and-out, and then unleashed Jones deep. Just as he did to Denver, he flashed past the secondary and caught Flacco's fling. He had to wait for the ball, fell to the ground to grab it, but was untouched by a Niner. Up he sprang, cutting left and using his speed to outrun two defenders to the end zone.

Desperate for some points, the 49ers completed four passes and got a 15-yard roughing penalty against Haloti Ngata, who later left with a knee injury. But again they couldn't cross the goal line, Paul Kruger got his second sack of the half on third down, forcing a second Akers field goal, from 27 yards.

When Jones began the second half by sprinting up the middle virtually untouched he is the second player with two TDs of 50 yards or more in a Super Bowl, tying Washington's Ricky Sanders in 1988 the rout was on.

"Everybody had their hand on this game," 49ers All-Pro linebacker Patrick Willis said. "We point the fingers at nobody. We win together and we lose together, and today we lost it."