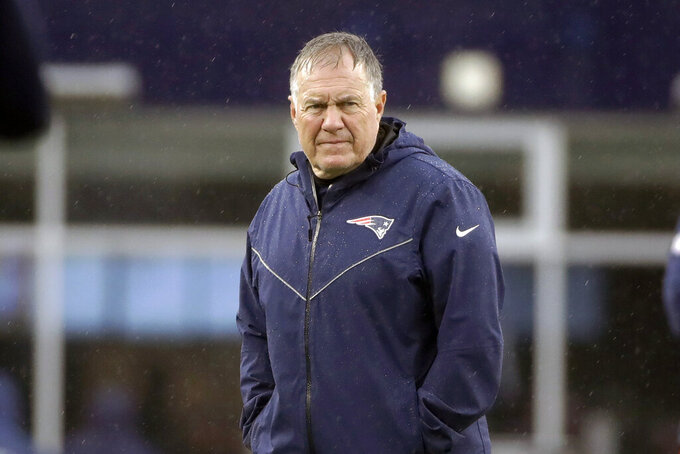 FILE - In this Oct. 27, 2019, file photo, New England Patriots head coach Bill Belichick watches his team warm up before an NFL football game against the Cleveland Browns, in Foxborough, Mass. With no defensive coordinator and coach Bill Belichick calling the plays, a veteran group of "Boogeymen" linebackers and stingy secondary lead a unit that is allowing a league-low 11 points per game have forced a NFL-best 27 turnovers. (AP Photo/Elise Amendola, File)

The NFL didn't see any expansion in the decade, but a few franchises were on the move. The St. Louis Rams returned to Los Angeles in 2016 after 21 seasons. A year later, the San Diego Chargers also returned to Los Angeles after 56 seasons, putting two teams in Hollywood. The Oakland Raiders announced they were moving to Las Vegas in 2020.

Their biggest victory came against Atlanta in February 2017. Led by NFL MVP Matt Ryan and an opportunistic defense, the Falcons stormed to a 21-0 lead and were up 28-3 with 18 minutes left in the game. But Tom Brady orchestrated the greatest comeback in Super Bowl history. He threw a pair of touchdown passes to get the Patriots within 28-20. After James White ran in from the 1 with 57 seconds remaining, Brady connected with Danny Amendola for the 2-point conversion.

The Patriots won the coin toss in overtime. Brady completed five straight passes to the Falcons 25 and soon, White scampered into the end zone to cap the win and give Brady and coach Bill Belichick their fifth championship.

New England's bid to repeat fell short the following year against the Philadelphia Eagles. Backup quarterback Nick Foles, who replaced Carson Wentz after the second-year quarterback tore two knee ligaments in Week 14, threw three touchdown passes and caught one in a 41-33 victory that gave Philadelphia its first NFL championship since 1960.

But the Patriots were back in the Big Game the next season against the high-powered Rams. The defense dominated Sean McVay's offense, holding the Rams to a field goal in a 13-3 victory. Belichick joined George Halas and Curly Lambeau as the only coaches to win six NFL titles. Brady became the first player to win six rings.

In 2016, Peyton Manning won his second Super Bowl title in his final game. Manning, at age 39, had the worst season of his career. He went from throwing 39 TDs and 15 interceptions to nine and 17, got hurt, lost his starting job to Brock Osweiler and regained it the final game of the season with the No. 1 seed on the line.

Manning was more of a "game manager" in the playoffs, and Von Miller and Denver's defense dominated Cam Newton and the Carolina Panthers in Super Bowl 50.

Brady won a pair of NFL MVP awards, including his third one at age 40 following the 2017 season. He became the second player in the four major professional sports to win MVP at age 40; Barry Bonds won baseball's award in 2004.

By winning three more Super Bowls to become the first player with six rings, Brady staked claim to the title of greatest quarterback ever. He's still going at age 42.

Peyton Manning, at 37, was no youngster when he set NFL records with 5,477 yards passing and 55 TD passes in 2013. Manning earned his record fifth NFL MVP award and first with the Broncos. He made a remarkable recovery after missing the 2011 season following several neck surgeries, got released by Indianapolis and cemented his Pro Football Hall of Fame resume in Denver.

Drew Brees also showed age doesn't matter at the quarterback position. He broke Manning's record for career yards passing and was third behind Manning and Brady in career TD passes. Brees, at 40, has the Saints in position to challenge for the Super Bowl this season.

Adrian Peterson was the only non-quarterback to win an MVP award in the decade. He rebounded from a torn ACL and MCL suffered in December 2011, ran for 2,097 yards in 2012 and became the fourth running back to earn the honors this century.

Belichick moved into the conversation for the greatest coach ever title, joining Halas and Lambeau as the only coaches to win six NFL championships.

Pete Carroll returned to the NFL with the Seattle Seahawks in 2010, won one Super Bowl and came within a goal-line interception of back-to-back titles.

Andy Reid left Philadelphia as the winningest coach in franchise history, went to Kansas City and turned the Chiefs into an instant winner. He led them to five playoff appearances in his first six seasons, drafted Patrick Mahomes and developed him into an NFL MVP in his second season.

Mike Tomlin continued his run of success in Pittsburgh. Bruce Arians won the NFL Coach of the Year Award in Indianapolis as an interim, and later in Arizona, and aims for a third in Tampa Bay.

Jon Gruden left a TV booth after nine years to return to Oakland for a $100 million, 10-year contract.

Other coaches who made their mark in the 2010s include John Harbaugh, Doug Pederson and Ron Rivera.

On Feb. 1, 2015, in the final minute the Seahawks were 1 yard away from winning consecutive Super Bowls. But on second down, Russell Wilson dropped back to pass instead of giving the ball to power back Marshawn Lynch. Malcolm Butler jumped in front of the pass and picked it to seal New England's fourth Super Bowl title.

On Feb. 5, 2017, Brady rallied the Patriots from that 25-point deficit against the Falcons to an overtime victory for their fifth ring.

On Feb. 4, 2018, the "Philly Special" helped deny New England another title and gave Philadelphia a parade.

On Jan. 8, 2012, Tim Tebow capped a season of incredible comebacks with one more, leading the Broncos to an overtime win over the Steelers by throwing an 80-yard touchdown pass to Demaryius Thomas on the first play in the extra period to send Denver to the divisional round. Tebow threw for 316 yards.

The NFL made several game-altering rule changes this decade. In 2019, both offensive and defensive pass interference calls became reviewable by officiating crews on a one-year trial period.

In 2018, the league simplified rules to clarify a catch. Many rules were implemented for player safety, including expansion of protection for defenseless players and elimination of hits with the crown of a helmet.

Overtime rules were amended in 2017, shortening the period from 15 minutes to 10 minutes. In 2010, a rule was implemented to give both teams an opportunity to possess the ball — unless the team that receives the overtime kickoff scores a touchdown on its first possession.

On Dec. 28, 2010, the Eagles and Vikings played the first Tuesday night game in the NFL since 1946. The game was scheduled for Sunday night, but the NFL moved it on game day before a blizzard dumped about a foot of snow on Philadelphia. Rookie quarterback Joe Webb, making his first career start filling in for the injured Brett Favre, led the 14-point underdog Vikings to an upset over Michael Vick and the NFC East champion Eagles. The loss cost Philadelphia a shot at a first-round bye in the playoffs. The Eagles ended up losing a wild-card game at home to Green Bay.