NFL at 100: Brady and Belichick build their dynasty 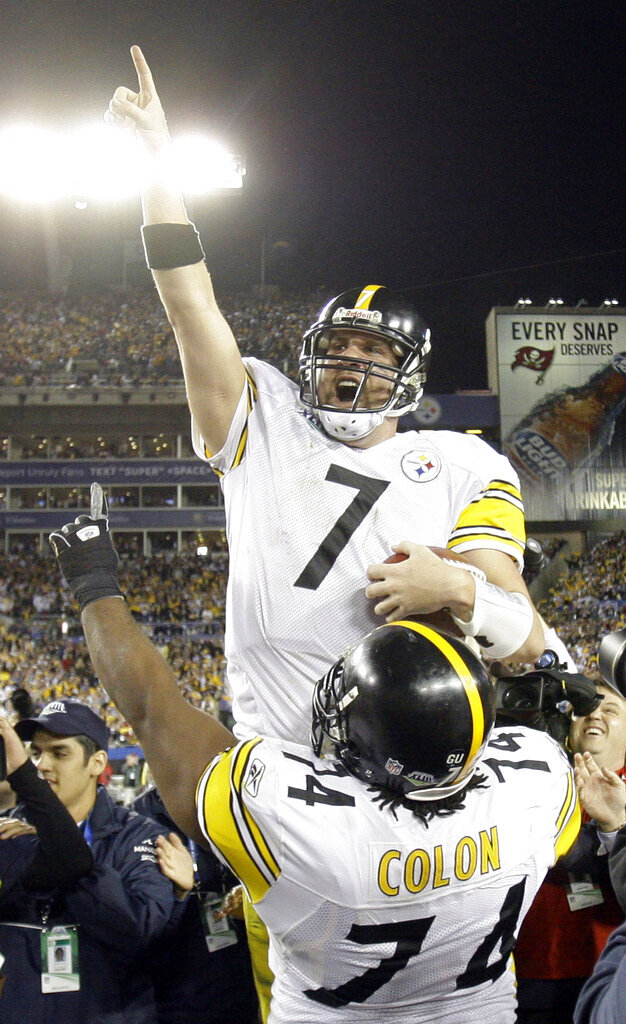 FILE - In this Feb. 1, 2009 file photo Pittsburgh Steelers quarterback Ben Roethlisberger, top, and his teammate Willie Colon celebrate after the Steelers' 27-23 win against the Arizona Cardinals in the NFL Super Bowl XLIII football game in Tampa, Fla. Overall, the AFC won seven of 10 Super Bowls in the 2000s decade with Roethlisberger leading Pittsburgh to a pair of titles. (AP Photo/Chris O'Meara, file) 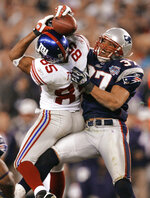 Houston rejoined the NFL ranks in 2002 as the Texans, five years after the Oilers departed for Tennessee. With a 32nd team, NFL owners unanimously approved a realignment plan for the league starting in 2002 that divided the league into eight four-team divisions. Seven clubs changed divisions, and the Seattle Seahawks changed conferences, moving from the AFC to the NFC. A new scheduling format also ensures that every team meets every other team in the league at least once every four years.

The St. Louis Rams, who had won the last Super Bowl of the 1990s with the “Greatest Show on Turf,” bounced back from a disappointing 2000 season to go 14-2 in 2001 and reach another Super Bowl, where future Hall of Fame quarterback Kurt Warner proclaimed he planned on winning multiple rings. But on the other side was a sixth-round draft pick out of Michigan the year before who had supplanted Drew Bledsoe as New England's starting quarterback.

With the game tied at 17, Brady led the Patriots into position for Adam Vinatieri's 48-yard field goal that gave New England a 20-17 win, marking the first time in the Super Bowl's 36-year history that the winning points came on the final play. The Patriots would win two more Super Bowls — also by a field goal — in the next three years.

Brady's best team didn't win it all, however. The Patriots went 16-0 in 2007, beating their opponents by an average of 19.7 points, and easily handled Jacksonville and San Diego to reach the team's fourth Super Bowl of the decade. Brady put New England in position to join the 1972 Miami Dolphins as the only NFL teams to go unbeaten when he threw a threw a 6-yard touchdown pass to Randy Moss with 2:42 remaining for a 14-10 lead.

Eli Manning responded with a 13-yard touchdown throw to Plaxico Burress with 35 seconds remaining to deny the Patriots and deliver the Giants' third championship. It came a year after older brother Peyton won his first Super Bowl, leading Indianapolis past Chicago 29-17 after beating Brady in the AFC championship game.

Overall, the AFC won seven of 10 Super Bowls in the decade with Ben Roethlisberger leading Pittsburgh to a pair of titles.

Although Brady established his foundation during the 2000s and over the next decade would stake claim to the title of greatest quarterback ever, it was Peyton Manning who redefined the position in new century.

Manning was a pioneer in the way he deciphered defenses and directed play at the line of scrimmage. Envision him pacing from tackle to tackle, pointing and hollering, as he became a model for just about every quarterback who's come along since. Manning not only was at the vanguard of the aerial fireworks shows that light up today's scoreboards and big screen TVs, he was the mastermind of it. His famous work ethic and machinations at the line allowed him to find the underbelly of any defensive formation, adjust accordingly, and deliver the pass with precision.

“He was on the forefront of basically a revolution in the way offenses are run in the National Football League,” Joe Theismann said. “His footprint was bigger than just the cities he played in. He transformed the position. The style of offense that he ran in Indianapolis was revolutionary and nobody ever figured out how to stop it there — or in Denver.

While Manning topped 4,000 yards passing nine times in the decade, Brett Favre and Warner were wounding down their Hall of Fame careers. Other transcendent players in the 2000s included Chargers running back LaDainian Tomlinson, Colts wide receiver Marvin Harrison and Chiefs tight end Tony Gonzalez. Even in this era of high-scoring offenses, several defensive players made their mark, too, including Hall of Famers Champ Bailey, Ray Lewis and Derrick Brooks.

Several coaches put their mark on the 2000s, including Jon Gruden, Tony Dungy, Mike Shanahan, Andy Reid, Bill Cowher, Tom Coughlin, Jeff Fisher, Brian Billick, Mike Holmgren and Mike Sherman. But nothing compares to Belichick, who brought a 36-44 NFL head coaching record to New England in 2000 and the Patriots went 5-11 in his first season, the same record that had gotten him fired in 1995 from the Cleveland Browns. Brady, the 199th overall draft pick that year, emerged as the starter in 2001 and from that point on, the Patriots went 121-41, including 14-4 in the playoffs, the rest of the decade.

On Jan. 19, 2002, the Brady-Belichick juggernaut started with the “ Tuck Rule Game,” in an AFC Divisional round playoff game in a heavy snowstorm in Foxborough, Massachusetts. In the final game played at Foxboro Stadium, Raiders cornerback Charles Woodson blitzed Brady for what he thought was a game-clinching fumble, recovered by linebacker Greg Biekert. The officials reviewed the play and ruled Brady had halted his passing motion and was attempting to tuck the ball back into his body. That made it an incomplete pass and not a fumble. The Patriots kept possession and Brady moved them into field-goal range for Adam Vinatieri's 45-yader that sent the game into overtime. Vinatieri's 23-yarder then sent the Patriots to the first of nine Super Bowl appearances under Brady and Belichick.

Brady's old rival, Peyton Manning, brought up the “Tuck Rule Game” with Brady in an episode of the ESPN+ series “Peyton's Places,” when they were shown attempting golf trick shots while discussing their storied rivalry.

“Was it a fumble?” Manning asks.

On Feb. 3, 2008, Brady was going for his fourth Super Bowl ring of the decade and a perfect 19-0 season when the New York Giants produced one of the greatest upsets in NFL history, beating the Patriots 17-14.

Trailing 14-10 in the final minutes, Eli Manning somehow escaped the grasp of three New England defenders and lofted a 32-yard pass to David Tyree, who pinned the ball against his helmet and held on as he fell backward at the Patriots 24-yard line with 59 seconds left. A few plays later, Manning lofted a 13-yard fade pass to Plaxico Burress with 35 seconds remaining for the winning touchdown.

The NFL began taking steps in this decade to reduce helmet hits and finally started to address concussions seriously. Although the real game-altering rules won't come until the following decade, things began to change. Teams were prohibited, for instance, from forming a wedge of more than two players on a kickoff return to block for a runner, and the bunch formation on kickoffs by the kicking team was eliminated.

On Oct. 2, 2005, an NFL-record 103,467 fans attended the Arizona Cardinals' 31-14 victory over the San Francisco 49ers at Mexico City's Azteca Stadium, the first-ever regular-season NFL game played outside the United States. This opened the NFL's eyes to its international audience and marketing opportunities. When the Kansas City Chiefs and Los Angeles Chargers play at that stadium this weekend, it will mark the 38th regular-season NFL game played on foreign fields.