NFL At 100: From head to toe, players equipment has evolved 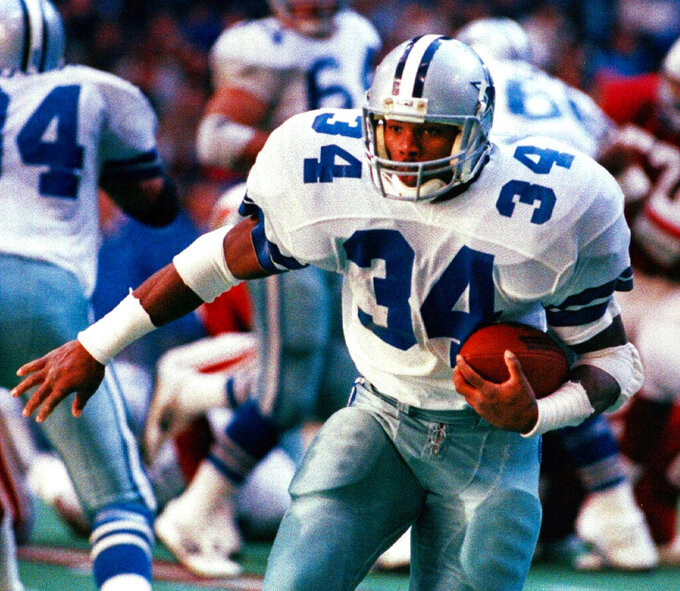 FILE - In this Dec. 27, 1987 file photo Dallas Cowboys running back Herschel Walker carries the ball against the St. Louis Cardinals in Irving, Texas. From the crude, oblong leather helmets to the sparsely padded brown and blue vertical-striped uniforms of the Chicago Bears, it's easy to see how equipment has drastically evolved in the NFL since the days of The Galloping Ghost in the 1920s and '30s. From their heads to their toes, the players' looks through the decades have changed so much, it's tough to believe it's all the same sport. (AP Photo/Steve Krauss, file) 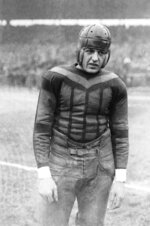 MIAMI (AP) — Red Grange looked more like the pilot of a single-engine airplane than a dominant halfback who once thrived in a single-wing offense.

From the crude, oblong leather helmets to the sparsely padded brown and blue vertical-striped uniforms of the Chicago Bears, it's easy to see how equipment has drastically evolved in the NFL since the days of The Galloping Ghost in the 1920s and '30s.

From their heads to their toes, the players' looks through the decades have changed so much, it's tough to believe it's all the same sport.

“Man, it looks like an outfit you’d wear in the wintertime,” former running back Thomas Jones said while looking at an Associated Press file photo of Grange. “I mean, I personally can’t imagine playing without a facemask, No. 1. As much as we crash into each other, the full-on collisions. It just goes to show how tough those guys were — how fearless those guys were.”

And, really, how under-equipped.

“When I see the 1920s pic, I think, they’re playing rugby,” said former offensive lineman Damien Woody, who played with New England, Detroit and the Jets from 1999-2010 and is currently an analyst for ESPN. “It doesn’t look like much protection.”

“That looks like it hurts,” current Jets left tackle Kelvin Beachum said while looking at the same photo. “I mean, look at that. Where are the pads? Ouch."

Safety, of course, has played a key role in how equipment has changed over the NFL’s 100 years, with tweaks, redesigns and, in some cases, total overhauls marking eras in league history.

“Now I look at the uniforms and they're so streamlined, it's like a fitted suit," said Jones, now an actor after running for 10,591 yards in 12 seasons with the Cardinals, Buccaneers, Bears, Jets and Chiefs from 2000-2011.

“From the uniforms to the shoulder pads to even the cleats, everything is just so streamlined and tailored for each player, which I love," Jones added. “It's like an evolution for us and that's how it should be: Things should look better, fit better and be more safe."

Protecting players’ heads has been at the forefront in recent years, with the league focusing on concussions and constantly evaluating the protective qualities of helmets with comprehensive tests.

While that process continues today as companies use cutting-edge technology to balance safety with comfort, helmets have come a long way from the hardened leather versions of the 1920s.

Fibershell covering came later in that decade, molded leather in the 1930s, plastic in 1949 — with padded versions used the following year.

Plastic helmets evolved over the next several decades, with facemasks added in the 1950s and going from a single bar to full cages in the ‘70s and grills in the ‘90s. The NFL and NFL Players’ Association collaborated over the last several years to use a team of bio-mechanical engineers to test the helmets that are approved for today's game.

“It really is amazing to see how far they've come from back in the day when there weren't even any facemasks," Beachum said.

The same sort of testing and tweaking has occurred with players' padding, probably the second-most easily recognizable evolution of equipment over the last century.

Players wore pads made out of felt, wool and leather in the 1920s — hardly reassuring when you were trying to protect yourself from big men making big tackles.

“I have the utmost respect for those guys," Jones said. “I also have watched a lot of old footage from the ‘50s and ‘60s, and those guys were just incredible from that era."

By then, pads had gone from foam to hardened leather to fiber shell and then plastic.

But by the 1980s, the size of the shoulder pads, in particular, had grown to the point where it was as if players were stuffing their jerseys with hard pillows.

“I don’t even know how they were able to run or be effective doing anything," joked former safety Kerry Rhodes, who has also made the post-football transition to Hollywood after playing for the Jets and Arizona Cardinals from 2005-12. “It’s like everything else in America: Let’s overcompensate and go big or go home!"

Check out photos of any running back or linebacker from that era, and you'll wonder how any of them fit through most doorways.

“The bigger the shoulder pads were, the tougher you looked," Jones said.

Just like Herschel Walker, who was a speedy but powerful running back during that era — despite shouldering a load.

“I’m thinking how heavy those pads were, especially for a running back," Woody said while looking at an AP file photo of Walker. “Guys want the least amount of pads as possible today."

That has certainly been reflected in the products equipment companies have designed in recent years by using technology to shrink the padding while also improving overall safety.

And not just on the players' shoulders.

The pads covering ribs, abdomens, hips, thighs and knees have also undergone plenty of changes to go from bulky to barely noticeable.

During his last seven or eight years in the NFL, Jones said the only padding he consistently wore below his waist was on his thighs. But even those were modified. He would take the full thigh pads, remove the hard plastic on the inside and play with the remaining plate covering his hips.

“It's all kind of come back full circle," Jones said, “because it kind of went from these guys really not having much protection to guys having all the protection to me literally having just my upper body protected when I played to the way things are now."

Jerseys have also come a long way, going from wool and cotton long-sleeved, rugby-style shirts to more breathable synthetic fabrics such as polyester to mesh — all the way to the form fitting jerseys seen on NFL fields every week that make it even tougher for players to grab hold of.

“When I came to the NFL, the jerseys were baggy and I remember hating the jerseys I had with the Arizona Cardinals because they were so baggy, the sleeves," Jones recalled. “We would have to tape the sides of the sleeves up to the shoulder pads just so they wouldn't hang down over our arms. And, if you lifted weights, you wanted your arms to show. Plus, it got annoying if the jersey sleeves were just dangling.

“But when I got to Tampa, from like 2000 to ‘03, the jerseys had become more fitted. My jersey was cut to my waist, so I didn't have to tuck my jersey in. And the sleeves were already fit to my shoulders."

Footwear also took, well, big steps over the years. High-top shoes with studs gave way to more conventional cleats — and they got lighter in the process.

Players also now have the luxury of having several different pairs of shoes stocked in their lockers, depending on the type of playing surface they'll be on in a given game.

“I definitely think the evolution process of the NFL, from an equipment perspective," Jones said, “has been incredible from the visors to the shoulder pads to the helmets, and everything else in between."