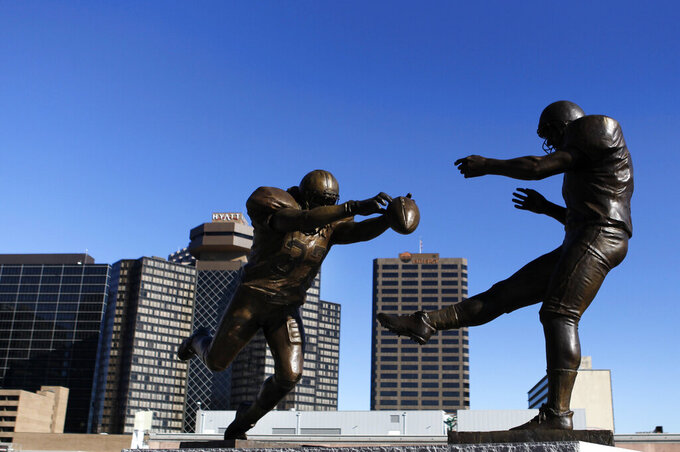 FILE - This Thursday, Nov. 8, 2012 file photo shows the bronze statue titled 'Rebirth,' which shows former New Orleans Saint Steve Gleason blocking a punt against the Atlanta Falcons outside the Mercedes-Benz Superdome in New Orleans. The half-century-old rivalry between the Atlanta Falcons and New Orleans Saints produced a moment so poignant that a statue was placed outside the Superdome to commemorate it. (AP Photo/Gerald Herbert, File)

NEW ORLEANS (AP) — The half-century-old rivalry between the Atlanta Falcons and New Orleans Saints produced a moment so poignant that a statue was placed outside the Superdome to commemorate it.

The 9-foot bronze, entitled "Rebirth," depicts the moment New Orleans special teams standout Steve Gleason dove to block Michael Koenen's punt in the opening minutes of the Saints' first game in the Superdome since Hurricane Katrina had torn open the stadium's roof — with thousands sheltered inside — about 13 months earlier.

Saints reserve defensive back Curtis Deloatch recovered the bounding ball in the end zone as the sellout crowd erupted into a cathartic, deafening, drink-spilling frenzy, and New Orleans was on its way to a 23-3 victory that became symbolic of a community's resilience as it recovered from one of the worst natural disasters in U.S. history.

"I don't ever remember a game where it was that loud anywhere," said Hall of Fame kicker Morten Andersen, who had spent much of his 25-year NFL career with the Saints but was kicking for the Falcons in 2006. "There was too much energy for the Saints and the city of New Orleans and we weren't going to be able to fight that. I don't say that in a defeatist way, just as a matter of fact."

Both teams entered the game 2-0. The Falcons were led by Michael Vick, whose career hadn't yet been derailed by a dogfighting scandal that would erupt the following year. The Saints had gone 3-13 in 2005, when they were forced to relocate their practice headquarters to San Antonio for the entire regular season and split their eight "home" games among East Rutherford, New Jersey; San Antonio and Baton Rouge.

But with a roster largely overhauled by rookie coach Sean Payton, and with new QB Drew Brees vigilantly working his way back from a career-threatening shoulder injury, New Orleans opened the regular season with surprising victories at Cleveland and Green Bay before the Superdome was finally ready to host a Week 3 clash on a Monday night.

"Obviously, you knew you had to play a football game and it was against your rival," said retired Saints running back Deuce McAllister, now a color analyst for the club's radio broadcasts. "But to be gone for a year and to get to come back home and really just give the fans some relief, that's what made it so special."

McAllister and Gleason were among returning players who'd gone to the Houston Astrodome to visit with evacuees in 2005 and they returned to the city as soon as they could to take part in rebuilding efforts.

"I remember Sean Payton telling us: 'Everything is set up perfectly for you. You just can't screw it up and lose the game,'" McAllister added.

McAllister was standing near Brees on the sideline when the double-thud of Koenen's punt deflecting off Gleason's hand set off a spine-tingling scene of unbridled elation so moving that television commentators in the "Monday Night Football" broadcast booth remained silent for 36 seconds while a series of camera angles focused on wildly cheering fans.

On the field, McAllister remembered thinking, "There's no way we're going to lose this game."

New Orleans jumped out to a 14-0 lead on play called the "Superdome special." It was a reverse that began with Brees executing a play-fake to McAllister running up the middle before handing off to Reggie Bush on an end around. Bush flipped the ball to receiver Devery Henderson as they crossed paths in the back field and Henderson scampered around the right end for an 11-yard TD — with Brees making a block down field.

"The stars on Broadway that day were the dome, the fans and the Saints, who were a catalyst for and symbol of recovery and rebirth," Andersen recalled. "We were extras in the play. That's how I saw it. We could have played the best game we ever played in our lives and still wouldn't have won because there was a much bigger force at play."

Gleason played seven seasons in the NFL — all with New Orleans, where he met his wife and still lives. He has become one of the world's leading advocates for people struggling with Lou Gehrig's disease, or amyotrophic lateral sclerosis, a degenerative neuro-muscular disease that has left Gleason paralyzed since his diagnosis about five years after his retirement from football.

He remains a celebrated public figure in New Orleans, where people won't soon forget what he did for their reeling community back in 2006.

With his long, curly brown hair flowing from beneath his helmet, Gleason was a picture of vitality, vigor and determination as he launched himself toward Koenen's foot, injecting a spirit of triumph into New Orleans' often frustrating and stressful recovery from disaster.

"Sometimes people think the future of New Orleans is in doubt," Gleason said as he sat at his locker after the game. "We're just here to do everything we can to help people create a bright future.

"I've got people here that I know and love and that was our goal — to come out, man, and just provide joy for those people. And that's exactly what we did," Gleason continued. "It can't get any better than that, man. So, I'm just real grateful that I can be a part of it."

As the Falcons and Saints prepare for their 100th regular-season meeting Sunday in the Superdome, here's a look at how that September 2006 clash affected each franchise in subsequent seasons:

The Falcons faltered during the remainder of 2006, finishing 7-9 and missing the playoffs. Coach Jim L. Mora was fired after the season.

Their next coach, Bobby Petrino, didn't even make it through one season, 2007, when Vick was suspended and his Falcons tenure ended because of the dogfighting scandal.

But the drafting of QB Matt Ryan in 2008 sparked a resurgence that has seen the Falcons make the playoffs six times since — including one Super Bowl they might rather forget after blowing a 28-3 third-quarter lead to New England.

Payton remains coach and Brees remains quarterback 13 seasons later in what has been by far the most successful era in franchise history.

The Falcons lead the regular-season series 51-48 and won the only playoff game between the two teams.

1978: Atlanta overcame a 17-6 deficit in the final three minutes, completing the comeback on a last-second, 57-yard desperation play called "Big Ben Right." QB Steve Bartkowski heaved the ball down the right sideline but short of the end zone — as designed. Receiver Wallace Francis leaped to tip the ball into the air and trailing receiver Alfred Jackson came down with it at the 10 before scampering into the end zone.

2011: Brees broke what was then Dan Marino's single-season passing record of 5,084 yards with a 9-yard touchdown pass to Darren Sproles. The Saints went on to win 45-16 and clinch the NFC South. Brees finished that season with 5,476 yards, a record that stood until Peyton Manning broke it by one yard with Denver in 2013.

2018: Brees became the NFL's all-time completions leader and rushed for a pair of TDs, the second one in overtime, to lift New Orleans to a wild 43-37 victory.

1995: In Andersen's first career game against the Saints, he kicked four field goals, the last in OT, to give Atlanta a 27-24 victory.

1983: Andersen was in just his second NFL season when he kicked a 35-yard field goal in the final seconds of a 19-17 Saints' victory. "I was so nervous," Andersen said, recalling how QB Kenny Stabler encouraged him with a hand on his shoulder right before the kick. "I remember him saying, 'Hey, Morten, let's go home.' It calmed me right down."

2012: The Falcons stopped Brees' NFL record of consecutive games with a touchdown pass at 54. It was a dominant defensive performance for Atlanta, which intercepted Brees five times in a 23-13 victory.

1991: The season ended with the only playoff meeting between Atlanta and New Orleans in the Superdome. Chris Miller's 61-yard touchdown pass to Michael Haynes with 2:41 left lifted the Falcons to a 27-20 victory.