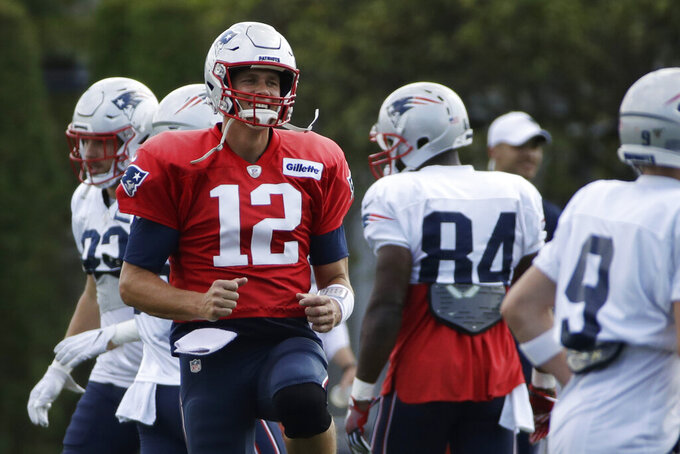 NEW YORK (AP) — Tom Brady is an old man by NFL standards, and he has been for a few years.

The New England Patriots quarterback has defied age, logic and the annual naysayers who think this might just be the season when he'll finally look like a guy whose playing days are coming to a close. Well, he's 42, coming off a sixth Super Bowl victory and still going strong at a time when players his age have already settled into their second — or third — careers. Oh, and he also recently signed a two-year contract extension worth $70 million.

So, keep those retirement party plans on hold.

"I'm ready to go this year and that's really what matters," Brady said. "That's where my focus is. It's a unique situation I'm in. I'm in my 20th year with the same team. I'm 42 years old, so pretty much uncharted territory, I think, for everybody.

"I'm going to go out there and do the best I can this year and see what happens."

Well, in the AFC East, everyone knows what that means.

Bill Belichick's Patriots have won the division 10 straight years, 15 of the last 16. And the one they didn't win? Yep, that was when Brady hurt his knee in the 2008 season opener and missed the rest of the year.

Meanwhile, quarterback has been mostly a revolving door for the New York Jets, Buffalo Bills and Miami Dolphins as New England's division opponents try to find the signal callers to end Brady and the Patriots' reign at the top.

It might take a trio of second-year QBs who were first-round draft picks last year, but were mere toddlers when Brady entered the league in 2000.

For the Jets, it's Sam Darnold, who at 22 is considered the face of a franchise that's 50 years into the search for the next Joe Namath.

The Bills have 23-year-old Josh Allen, a big-armed passer whose legs might be his best attribute at the moment.

The Dolphins traded for Josh Rosen, the 22-year-old former UCLA star whose short tenure in Arizona ended when the Cardinals chose Kyler Murray atop this year's draft.

"It's pretty ironic that you've got the greatest quarterback of all time with three guys from the same class a year ago in the same division," Bills general manager Brandon Beane said. "That's like scripted from Hollywood or something."

Except now, the Jets, Bills and Dolphins are hoping for something other than the old, predictable ending.

Here's a look at the AFC East:

Unlike the ageless Brady, Rob Gronkowski is on the retirement circuit, leaving the Patriots without a clear-cut starting tight end, providing one of their biggest question marks entering the season.

New England signed Ben Watson out of retirement in the offseason, but he's suspended the first four games for violating the NFL's policy on performance enhancers. They acquired Eric Saubert from Atlanta, and also have Matt LaCosse, Stephen Anderson and Lance Kendricks, among others.

"Yeah, I mean, he's a great player," Brady said of Gronkowski. "To replace great players, it's not like you just pick another one off the tight end tree. You can't just go out back. You've got to find guys that come in and want to put the work in and want to try and contribute."

Adam Gase knows all about trying to beat the Patriots, having been coach of the Dolphins the last three years.

He replaces Todd Bowles with the Jets, and is excited about working with a young quarterback such as Darnold at this stage of his development. He's also fired up about having running back Le'Veon Bell's versatility in his offense. Sure, Bell hasn't played in a game for nearly 20 months after sitting out last season in a contract dispute with Pittsburgh. But he's feeling healthy and motivated — and gives the Jets some potential for an up-tempo, attacking offense that they haven't had in years.

"They're making it easy for us to keep coming up with stuff," Gase said, "and just keep pushing them and keep challenging them."

The Bills have lots of new faces in town this season, and getting the newcomers on offense to jell has been the priority.

Buffalo added Frank Gore to an experienced running backs corps that includes LeSean McCoy. There's a good chance the Bills will have four new starters on the offensive line, although center Mitch Morse missed a few weeks of training camp with a concussion.

Wide receivers Cole Beasley and John Brown appear as though they'll be starters, and Buffalo retooled its tight ends spot by signing Tyler Kroft, although he could miss the start of the season while recovering from a broken foot.

"Obviously, we weren't good enough in a couple of phases last year on the offensive side of the ball," coach Sean McDermott said. "And I give Brandon credit for bringing players in that we feel can help us. But that remains to be seen. So there's a lot of challenges right now."

WHO ARE THESE GUYS?

The Dolphins cleaned house in the offseason, and other than perhaps Rosen, cornerback Xavien Howard, left tackle Laremy Tunsil and maybe quarterback Ryan Fitzpatrick — who might end up on the bench if Rosen wins the starting job — Miami lacks big-name players.

New coach Brian Flores doesn't care about any of that. He knows who he's got on his roster.

"I'll let other people worry about star power and all of that — whatever you want to call that," said Flores, who was New England's de facto defensive coordinator last season. "It's a team game. Stars are kind of a 'me' thing. ... If you have a star that wants to do his own thing, that just doesn't work. I'm of the 'put the team first' mantra and these so-called 'stars' need to be on that page on this team."