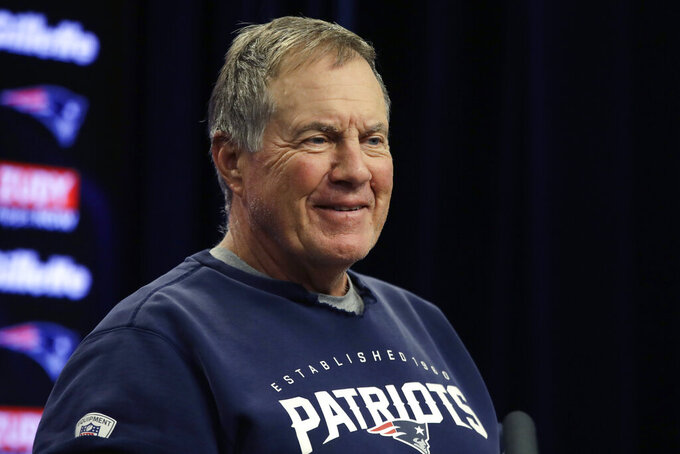 FOXBOROUGH, Mass. (AP) — Tom Brady's 40th birthday prior to the 2017 season was supposed to mark the start of decline for the NFL's most-decorated quarterback.

Instead, it ended with Brady becoming the oldest MVP in league history and coming eight points short of taking the Philadelphia Eagles to overtime in a Super Bowl thriller.

The following season the Patriots started 2-2 and whispers again arose about Father Time creeping up on him.

Now 42 as he enters his 20th season, Brady is still here and maintains playing until 45 is still his goal.

"I got a great opportunity to prove to a lot of people that didn't think I could do it. Hopefully, I can," Brady said. "Well done is better than well said."

In short, it might be time to stop ascribing traditional models to Brady's ability to lead teams to the Super Bowl — no matter his age.

But the Patriots do enter the 2019 season facing some legitimate questions that must be answered if they are going to get there for a fourth straight season, or become the first repeat champion since they did so to conclude the 2004 season.

It begins with the absence of tight end Rob Gronkowski, who retired in the offseason. A stalwart since arriving in New England in 2010, Gronk quickly grew into Brady's most-trusted target in the passing game. They connected on 78 touchdown passes. It is the second-highest scoring connection between a quarterback and a tight end in NFL history.

"To replace great players, it's not like you just pick another one off the tight end tree. You can't just go out back," Brady said of Gronk. "You've got to find guys that come in and want to put the work in and want to try and contribute."

The Patriots signed Ben Watson in the offseason, but he'll begin the season serving a four-game suspension for testing positive for a banned substance.

The same is true about a receiving corps that returns Super Bowl MVP Julian Edelman.

Josh Gordon was also conditionally reinstated following his latest suspension for violations of the league's substance abuse policy. But there are no guarantees Gordon can help the team given his history of suspensions. That means they'll have to bank on production from some young new additions.

As for the defense, the Patriots did their best to address the free agency loss of edge rusher Trey Flowers. They added veteran Michael Bennett and have been pleasantly pleased with rookie edge Chase Winovich. The veteran secondary remains intact from last season. And without a named defensive coordinator, coach Bill Belichick has vowed to take on play calling.

"I was excited to work with Belichick and the rest of the guys on defense," Bennett said. "Obviously, they've got a great pedigree, all of the great defensive linemen that have been here before me, so it's just a lot. . The opportunity to play a lot of different fronts and do a lot of different things with a lot of these young guys is fun."

As the Patriots fine tune things, they'll have the benefit of a back-loaded schedule. Their toughest matchups on paper before reaching their Week 10 bye are the season opener against Pittsburgh (Sept. 8) and an Oct. 27 matchup with an upgraded Browns team. Things will get tougher in the second half with consecutive matchups against Philadelphia, Dallas, Houston and Kansas City. But they close against Cincinnati, Buffalo and Miami, putting 11 wins more than in reach.

Belichick hasn't been shy about mixing things up on special teams. He will do it again this season.

The Patriots cut longtime punter Ryan Allen, who booted them to three Super Bowl victories in six seasons. Enter Jake Bailey, a fifth-round draft choice in April, who proved to be just as skillful as Allen during the preseason, launching a 54-yarder against Tennessee.

Trent Brown allowed only 3 ½ sacks last season and was called for only five penalties in 16 starts. He wasn't called for a single penalty and didn't allow a sack in the playoffs.

Then he left in free agency, signing a four-year, $66 million deal with the Raiders.

It left a huge void at left tackle. Brady's new blind side protector will be Isaiah Wynn. The 23rd overall pick in the 2018 draft, he had his rookie season cut short during a preseason game when he tore an Achilles tendon. He's poised to prove that was a mere bump in his young career.

"I Just try to use every day to grow," Wynn said.

By W.g. Ramirez an hour ago
By Dennis Waszak Jr. 4 hrs ago
5 hrs ago
By David Brandt 5 hrs ago
By Andrew Seligman 5 hrs ago