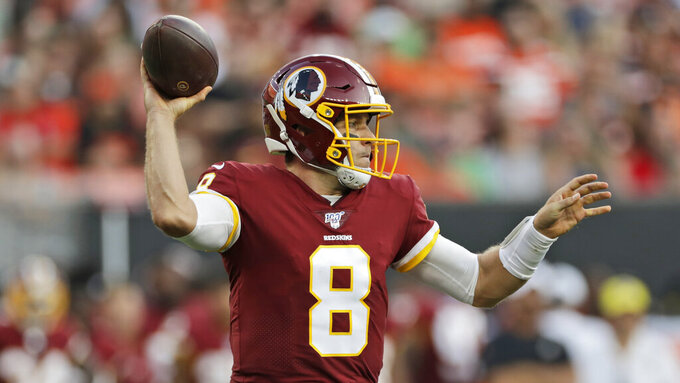 Washington Redskins quarterback Case Keenum throws a pass during the first half of an NFL preseason football game against the Cleveland Browns, Thursday, Aug. 8, 2019, in Cleveland. (AP Photo/Ron Schwane) 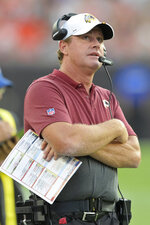 ASHBURN, Va. (AP) — Jay Gruden could easily have been fired after last season or the season before that.

"I've been fortunate they gave me another opportunity," the Redskins coach said. "They could've made a change Year 1 after going 4-12. But they chose to stick with me."

Owner Dan Snyder and President Bruce Allen have stuck with Gruden so far, but there's little doubt he's coaching for his job in his sixth season. Washington made the playoffs once in his first five years, and he's already the longest-tenured coach since Snyder bought the team in 1999.

A wrath of injuries spared Gruden after disappointing 2017 and 2018 seasons. Despite or perhaps because of a distinct lack of talent to work with, numerous online sportsbooks have Gruden as the favorite to be the first NFL coach fired this season, and his seat is nearing a boiling point.

"Our goal is to win," Allen told The Associated Press this summer. "We all have a record and the record's the record. We, at the end of the season, throughout the organization, we evaluate everything we do. It's not an always pleasant evaluation when the results aren't what you want them to be. But there's some logical and rational thinking behind every decision we try to make."

The decision this time seems simple: If Washington doesn't make the playoffs, it's hard to see the likable and offensively gifted Gruden getting a seventh year in his current role. The team is 35-44-1 and lost its only playoff game under Gruden.

This last chance comes with no certainty who among Case Keenum, Colt McCoy and Dwayne Haskins will start at quarterback; the absence of stud left tackle Trent Williams; and no certainty that the defense can be strong enough to overcome an offense bereft of many playmakers. Gruden has two years left on his contract, and regardless of the turmoil around him, the focus is on making the most out of talent or lack thereof at his disposal.

"When you sign your contract in the NFL as a coach, you know you've got to produce," Gruden said. "I think that comes with the territory."

Training camp had a different vibe with more coaching and organization, a sharper focus on instruction and noticeably quieter music. Practices were more disciplined, and when fights broke out, Gruden was madder than veteran players had ever seen him. "Camp Jay" featured more urgency than ever before.

"There's a lot more coaching and teaching going on, and I can tell he's been tougher on us, too," running back Chris Thompson said. "He's trying to just do everything he can to help us and just help try to change things here."

Gruden should get the opportunity to choose his QB and potentially show management what he might be able to do with Haskins, the Redskins' first-round pick out of Ohio State. To give Gruden that time, it's up to players to outperform some brutal preseason expectations that make them look like one of the worst teams in the league and have so much speculation swirling about Gruden being as good as gone.

"We're a reflection of the coaches," linebacker Ryan Kerrigan said. "Coaches get on the hot seat when we as players don't play well. So whenever someone says, 'Oh, Coach is on the hot seat' or this and that, that's really kind of a diss on us, so I definitely take that personally and it makes me want to play well for coach not having to go through that."

Some things to watch for with the Redskins this season:

Keenum might be the Week 1 starter by default because McCoy is still dealing with lingering pain from breaking his right leg last season, and Haskins isn't yet ready to take the reins. The 31-year-old who led Minnesota to the NFC title game two years ago before a rough season with Denver hasn't stood out in training camp or preseason action, but isn't worried about that.

"I feel like we haven't even tapped into even a portion of our potential that we have as an offense," Keenum said. "We don't want to be at our best right now. Going into games, I want to be perfect and I want to make all the right checks and all the right reads and all the throws and score touchdowns every time, but this is a process."

That process should someday lead to Haskins taking over as starter. The 15th overall pick has the arm to start in the NFL, but the question is whether he'll get that chance midway through this season or in 2020.

Whoever starts at quarterback might not have Williams as a safety blanket to protect his blind side. The seven-time Pro Bowl selection has been a no-show because of a dispute with the team that seemingly has no end in sight, and it's a major problem for the Redskins' offense.

"To not have him on the left side, it hurts," veteran running back Adrian Peterson said. "When you're missing the best player on the team, you're going to feel the effect of that. It's different for our quarterbacks to sit back there and not know for certain that their back side is protected."

Washington signed 36-year-old Donald Penn as a stopgap, and second-year lineman Geron Christian has been working with the first team. Neither of them is Williams, though.

"You've got to continue to move forward," Peterson said. "Week 1, there's going to be a left tackle out there."

After spending 2017 and 2018 first-round picks on Alabama's Jonathan Allen and Daron Payne and seemingly hitting on late-rounders Matt Ioannidis and Tim Settle, Washington is stacked on the defensive line. Add rookie Montez Sweat to the pass rush that already includes Kerrigan, and Washington's defense has star potential.

"Those bulls up front really make everything go for us," cornerback Josh Norman said. "Oh man, we're going to be a force to be reckoned with, for sure."