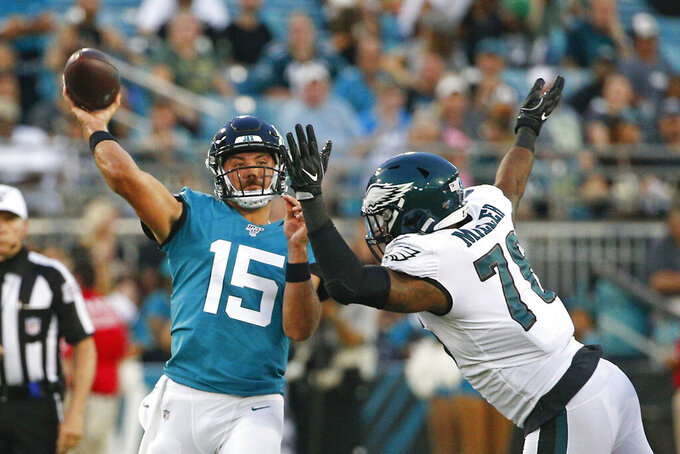 Jacksonville Jaguars quarterback Gardner Minshew (15) throws a pass as he is pressured by Philadelphia Eagles defensive end Shareef Miller during the first half of an NFL preseason football game, Thursday, Aug. 15, 2019, in Jacksonville, Fla. (AP Photo/Stephen B. Morton) 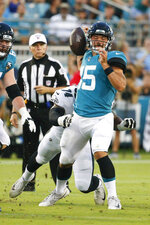 Fournette wore a headset, listened to every play call and then chatted with "Flip" and his fellow running backs between series. The former LSU star was as involved as he could be from the sideline.

It was a stark contrast to how Fournette ended last season: sitting on the bench, withdrawn from teammates and unconcerned with anything happening in the game. Personnel chief Tom Coughlin even ripped Fournette afterward, calling him "disrespectful" and "selfish."

Fournette insists he's made professional progress since. The Jaguars are hesitant to agree.

Ultimately, Fournette's growth will be determined by how he performs on and off the field. What he does will go a long way toward determining whether the Jaguars remain at the bottom of the AFC South or return to being conference contenders.

"He's going to be a major reason for where our offense goes," DeFilippo said. "I'm not going to sugarcoat that. Leonard Fournette needs to be a big part of this offense."

Fournette missed seven full games and half of two others with hamstring and foot injuries. He was suspended for another after coming off the bench and punching Buffalo defensive lineman Shaq Lawson.

The team responded by voiding the remaining guarantees in his rookie contract. He also was fined, criticized and admittedly not in ideal shape down the stretch. He finished with 439 yards rushing and five touchdowns.

"Anything is better than last year, most definitely," said Fournette, the fourth overall pick in the 2017 NFL draft.

Marrone hired 64-year-old Terry Robiskie, who, like Fournette, was born and raised in New Orleans and attended LSU, as running backs coach. They then added veteran Alfred Blue (another LSU alum) to be Fournette's backup.

And even though Jacksonville signed quarterback and former Super Bowl MVP Nick Foles to upgrade one of the NFL's most anemic offenses, Fournette is still expected to be the centerpiece under DeFilippo.

So far, so good. Fournette arrived at training camp in the best shape of his NFL career after spending part of the offseason training in Dallas, then working with his college strength and conditioning coach in Wyoming in hopes of getting back to his "foundation."

"I kind of put a lot on myself this offseason, like getting my body right," Fournette said. "Just mentally coming back ready to play football. No distractions. Leaving the outside stuff where it's at."

Here are some other things to know about the Jaguars as they enter the 2019 season:

The Jaguars are counting on a rookie linebacker and two young safeties to remain one of the league's best defenses. Jacksonville cut defensive tackle Malik Jackson and safety Tashaun Gipson to gain salary cap space and then lost linebacker Telvin Smith, who decided to walk away from football to "get my world in order" after leading the team in tackles each of the last two seasons.

Marrone took a "smarter approach" to training camp and the preseason after last year's slew of injuries. It was a complete about-face for an old-school coach who prefers to grind guys into the ground before the season. The goal is to have the team as healthy as possible when the season begins against Kansas City on Sept. 8.

For a team playing a last-place schedule, Jacksonville didn't get any early season breaks.