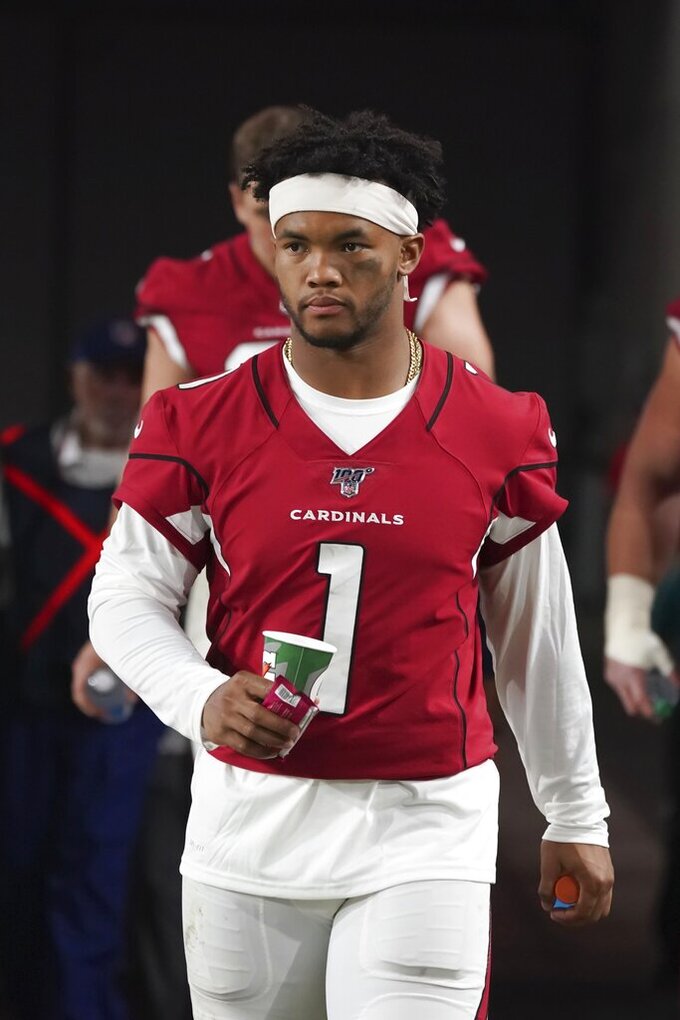 Arizona Cardinals quarterback Kyler Murray (1) on the sideline during an NFL preseason game against the Los Angeles Chargers on 8/8/19 in Glendale, Ariz. (Gene Lower via AP)

While the pecking order in some divisions appears set in stone year after year, the NFC West has been a more egalitarian foursome with each of the four franchises spending time on top in recent years.

Lately, it's been the Los Angeles Rams' turn.

Coach Sean McVay led the Rams to the Super Bowl in his second season in 2018, making the division the only one of the eight in the NFL where all four teams have made it to the title game in the past 11 seasons.

With Jared Goff and Todd Gurley back headlining a dynamic offense and Aaron Donald anchoring an upgraded defense , the Rams head into the 2019 season once again as the favorites in the division.

But to succeed this season they will need to buck the trend of disappointing Super Bowl losers. While the New England Patriots bounced back from a Super Bowl loss in the 2017 season to beat the Rams 13-3 for the championship last season, that was a rare exception. They were just the third team to win it all a season after losing the Super Bowl, and the first team to even make it back to the title game since Buffalo had four straight trips following the 1990-93 seasons.

While McVay has heard all about the Super Bowl hangover, he isn't dwelling on it heading into this season.

"I think what you talk about is you're so fortunate to do some of the things we did last year, even though it didn't end the way we wanted to," McVay said. "I know that our coaching staff, our players, couldn't be more excited about getting back, getting going. I think you earn that confidence you have every single day. I'm not sure what that feels like, but I feel like we've got a confident team that's excited about trying to peak when we play the Carolina Panthers Week 1."

Here are some things to know about the NFC West:

The Rams didn't rest on their laurels, making two key additions to their defense by signing veteran safety Eric Weddle and pass rusher Clay Matthews. Weddle is one of the smartest players in the league and quickly emerged as a leader on the defense despite being in his first season with the team. Getting better on defense could help the Rams, especially if Gurley is still dealing with knee issues that limited his playing time late in the regular season and in the playoffs, and the offensive line takes a step back following the offseason departures of guard Rodger Saffold and center John Sullivan.

The one constant in the topsy-turvy NFC West has been coach Pete Carroll's Seahawks. While the rest of the teams in the division have taken turns as contenders and also-rans, the Seahawks have made the playoffs seven times in nine seasons under Carroll and finished below second in the division just once, back in 2011. The main constant since then has been dynamic quarterback Russell Wilson and a dominant defense that got upgraded a week before the start of the season with the acquisition of edge rusher Jadeveon Clowney from Houston.

While the old "Legion of Boom" has mostly moved on, do-everything linebacker Bobby Wagner remains as the leader of the unit and was rewarded with a three-year, $54 million extension this summer. Wilson signed a $140 million extension earlier in the offseason as the Seahawks remained committed to their best players on both sides of the ball. Wilson will have to make do without star receiver Doug Baldwin, who retired because of poor health. But in a pass-happy era, the Seahawks were the only team to run on more than half their offensive plays , with their 52.8 percent run tendency easily topping the league average of 41.2 percent.

The optimism from the second year under coach Kyle Shanahan in San Francisco didn't last through September for the 49ers last season. Running back Jerick McKinnon tore his ACL a week before the season opener and quarterback Jimmy Garoppolo did the same in the third game. Any chance of contending slipped away that quickly.

Garoppolo is fully healed and ready to show he's worthy of the $137.5 million contract he has despite making only 10 starts in five seasons. McKinnon won't return this season after having several setbacks in his recovery, but the Niners have other viable options at running back in newcomer Tevin Coleman and Matt Breida. Success in San Francisco will depend on Garoppolo's ability to be a franchise quarterback and needed improvements on a defense that set NFL records for futility with only seven takeaways and two interceptions. No. 2 overall pick Nick Bosa and big-ticket acquisition Dee Ford give the Niners a dangerous pair of edge rushers , but that won't matter if the secondary doesn't improve around veteran Richard Sherman.

After watching McVay lead a turnaround in Los Angeles, the Cardinals searched for their own version and they hired Kliff Kingsbury . He replaces the defense-minded Steve Wilks, who was fired after going 3-13 in his only season in the desert. Kingsbury comes with many question marks after being fired following three straight losing seasons at Texas Tech. But he also brings his version of the fast-paced, wide-open "Air Raid" offense. He has an intriguing player to run it after Arizona drafted undersized Heisman Trophy winning quarterback Kyler Murray first overall. While the Cardinals may not be contenders thanks to suspect defense and a porous offensive line, they could be one of the more intriguing teams with a new offensive system.