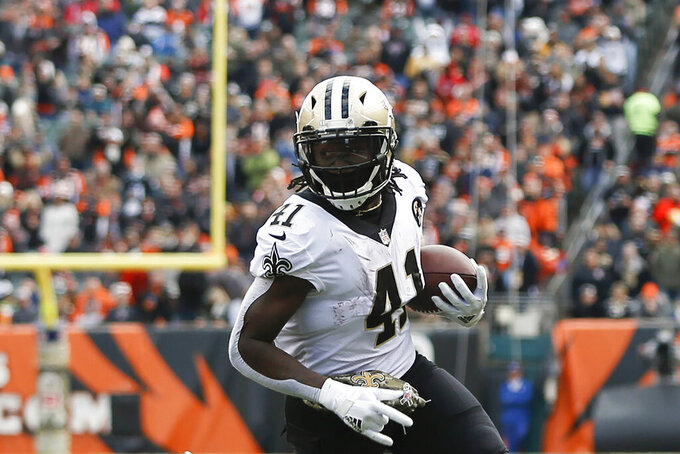 FILE - In this Nov. 11, 2018, file photo, New Orleans Saints running back Alvin Kamara (41) runs in for a touchdown against the Cincinnati Bengals in the first half of an NFL football game, in Cincinnati. The NFC South’s reputation as the NFL’s most balanced division has taken a hit. The New Orleans Saints’ two-year run as division champion, including a dominant showing in 2018, has left other teams eager to prove there is still parity in the South. (AP Photo/Frank Victores, File) 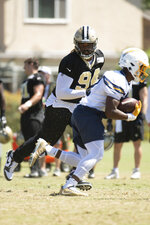 NEW ORLEANS (AP) — Drew Brees and the New Orleans Saints may very well be on a revenge tour this season, whether they frame it that way publicly or not.

The Saints are among the favorites to contend for the Super Bowl berth they were agonizingly denied last season by both the Los Angeles Rams and an untimely officiating lapse in the NFC title game. And that heartbreak came just one year after their previous postseason run was stunningly halted by the first decisive touchdown on the final snap of regulation in NFL playoff history — on a 61-yard passing play, no less.

Brees, who is 40 and entering his 19th season, asserts that professionalism demands compartmentalization, so that disgust about the recent past doesn't undermine one's focus on the work at hand as a new season arrives.

At the same time, the record-setting quarterback doesn't pretend bad memories can be wiped clean from one's mind, or have no motivational value going forward.

"It's not like you just totally forget that," Brees said. "There's defining moments from your career — I certainly know I've had my fair share — that I can reflect back on and still sting a little bit, still burn a little bit, and still motivate, and still inspire. That's part of what keeps you going."

The NFL changed rules allowing coaches to ask for replay review when they feel a call was missed, as the NFL has acknowledged two calls were when a Rams defender got away with pass interference and a helmet hit late in the NFC title game. That change comes too late to make up for the non-call that helped the Rams rally to tie the game with 15 seconds left and win in overtime.

But the good news for the Saints is that much of the core of their past two playoff squads is young and remains intact.

Leading receiver Michael Thomas, who arrived at camp after getting a big contract extension, is entering just his fourth season, while dynamic running back Alvin Kamara, top cornerback Marshon Lattimore and starting right tackle Ryan Ramczyk are in Year 3.

Most of their veteran leaders are back as well, from 2017 All-Pro defensive end Cameron Jordan and middle linebacker Demario Davis on defense to Brees and left tackle Terron Armstead on offense.

The Saints also made a notable addition to coach Sean Payton's offensive arsenal in free agency when they signed tight end Jared Cook, who had career-best receiving numbers in Oakland last season and has quickly demonstrated chemistry with Brees in camp.

A third straight trip to the playoffs looks likely, but Brees figures it's hardly appropriate to start thinking about that before the regular season has even begun.

Every team except the defending Super Bowl champion "fell off the mountain," Brees said. "They're sitting down at the bottom and now here goes the climb, one step at a time. So I'm not thinking about February of 2020 right now. That's a long way away and that's an overwhelming feeling if you decide to look to there. So I'm just focused on the here and now."

Here are some other prominent story lines for the 2019 Saints:

The Saints want to punish teams for blocking schemes that overemphasize stopping Jordan's edge rush. One hope is that second-year defensive end Marcus Davenport fulfills more of the potential New Orleans saw in him when it traded up to select him in the first round of the 2018 draft. Davenport shared snaps last season with Alex Okafor, and his 4 ½ sacks tied with defensive tackle David Onyemata for fourth on the club. But the Saints let Okafor walk in free agency, opening the way for Davenport to become more of a full-time end.

"The second year into it, I think he's a lot more comfortable with where he's aligned in the technique involved," Payton said.

Defensive tackle Sheldon Rankins was second on the Saints with eight sacks, but is working his way back from a torn Achilles tendon. New Orleans brought in former New England Patriot Malcom Brown to help fill that void.

Brees, the NFL's career leader in yards passing and completions , is in the final season of his contract. But heading into 2019, there's been no clear sign of decline. If anything, he's playing smarter. He had one of the most efficient seasons in NFL history in 2018, completing an NFL record 74.4% of his passes. His 32 touchdowns to just five interceptions was the second-best such ratio in the NFL last season behind Green Bay's Aaron Rodgers. His 3,992 yards passing were his lowest yet since joining the Saints in 2006, but he sat out the inconsequential last game of the regular season. Plus, Payton's play calling took advantage of one of the NFL's top running games, particularly with late-game leads.

The Saints responded to the retirement of veteran center Max Unger by signing free agent Nick Easton and then using their top overall draft pick — in the second round — to take Texas A&M's Erik McCoy. Based on snaps in training camp and in the preseason, it looks like the rookie will be snapping the ball to Brees in the opener. Payton has said that even if Easton doesn't start, his ability to play both guard and center would give the Saints favorable depth along the interior offensive line.

The Saints' biggest loss in free agency appeared to be running back Mark Ingram, who shared snaps with Kamara to great effect the past two seasons. With Ingram leaving for Baltimore, the Saints brought in former Minnesota running back Latavius Murray. Murray hasn't been used as a receiver out of the backfield as much in his career as the Saints did with Ingram, but Payton said New Orleans is hoping Murray will prove competent in the short passing game to keep defenses off balance.