NFL carousel will spin soon, and not just for quarterbacks 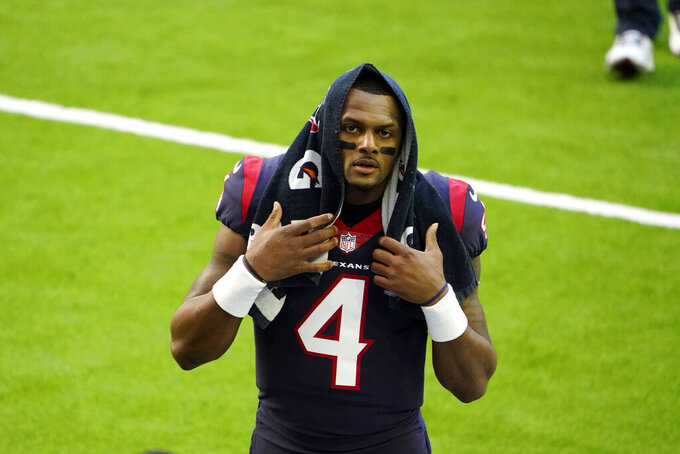 Houston Texans quarterback Deshaun Watson walks off the field before an NFL football game against the Tennessee Titans Sunday, Jan. 3, 2021, in Houston. Star quarterback Deshaun Watson has requested a trade from the Houston Texans, a person familiar with the move told The Associated Press. The person spoke to the AP on the condition of anonymity Thursday, Jan. 28, 2021, because they weren’t authorized to discuss the request publicly. (AP Photo/Eric Christian Smith)

The Matthew Stafford-Jared Goff trade not only has whet fans' appetites for big deals, it's caused a social media frenzy about which quarterbacks are headed elsewhere.

That could happen with the likes of Carson Wentz, Jimmy Garoppolo, Deshaun Watson and Cam Newton. And on a slightly less publicized level with Teddy Bridgewater, Jameis Winston, Sam Darnold and Mitchell Trubisky.

But before anyone gets the idea that half of the NFL's starting signal-callers from 2020 will be employed by new teams in 2021, well, know that carousel is not spinning out of control.

The COVID-19 pandemic not only reduced revenues for the NFL across the board, it also has forced a lower salary cap for 2021. That figure is undetermined, though it won't be less than $175 million and probably will be in the $180 million-$185 million range.

So any cap hits for trades involving QBs with mega-contracts will be built as much on finances as football skills. Sure, plenty of teams with questionable quarterbacking would love to add a Watson or Wentz — and even inquire about the availability of the likes of David Carr or Matt Ryan. But the price tag is a paramount consideration.

There are also the tricky contract dynamics for Dak Prescott and Ben Roethlisberger. Prescott played under the franchise tag cost of $31.4 million but was injured in the Cowboys' fifth game. Dallas is adamant about keeping Prescott, preferably with a long-term deal.

“One of the things that we’re going to have to really see where we are, and it will affect everybody, all 32 (NFL teams), and it will affect our team," Cowboys executive vice president Stephen Jones said, " is what the consequences of the virus have had on our cap situation going forward, and where is that salary cap going to be and what kind of cap are we going to manage into. So all those things will play a role into players that we keep that are under contract, where we can sign — obviously Dak being at the top of that list — and then going from there.”

Roethlisberger has indicated a willingness to redo his contract with Pittsburgh for what likely will be his final season. He's set for a cap hit of $41 million, and that won't happen.

There probably are fewer teams with long-term set signal-callers than those in flux. For sure, the Patriots, Jets, Texans, Colts and Steelers in the AFC have uncertainty. Philadelphia, Washington, Chicago, New Orleans, Carolina and San Francisco in the NFC could be making significant changes.

Plus, Urban Meyer is sold on Trevor Lawrence as the first overall draft pick for the Jacksonville Jaguars. There are a handful of quarterbacks in this draft who also could wind up as starters next season.

“Who we pick at that quarterback spot, that’s going to be one of the most important decisions I’ve made in my lifetime, along with the partnership of our owner and general manager," Meyer said. "I see some elite quarterbacks out there right now.”

The free agent market doesn't have those, unless Prescott lands there. The strength in free agency is on defense, from the line to the secondary.

Indeed, two of the keys to Tampa Bay's championship, linebackers Shaq Barrett and Lavonte David, will be available if the Bucs don't re-up them before next month.

“I’m very, very confident,” Arians said. “I have all the trust in the world in (GM) Jason (Licht) and what he would do. These guys, they have a bond. There will be dollars involved. But I think that this group is so, so close that sometimes dollars don’t matter. But we’re going to do everything we can to get the dollars right, too, because they earned it.”

Blockers and pass catchers seem most attractive on offense. In the trenches, two All-Pros might be free: center Corey Linsley and guard Brandon Scherff. So might Joe Thuney, Trent Williams and Taylor Moton.

In the pass-happy NFL, teams always are looking for receivers, and the top wideouts about to hit free agency are Allen Robinson, Kenny Golladay and JuJu Smith-Schuster.

Finally, consider that finances could force some teams to make surprise moves. But bidding wars could be tepid this time around.