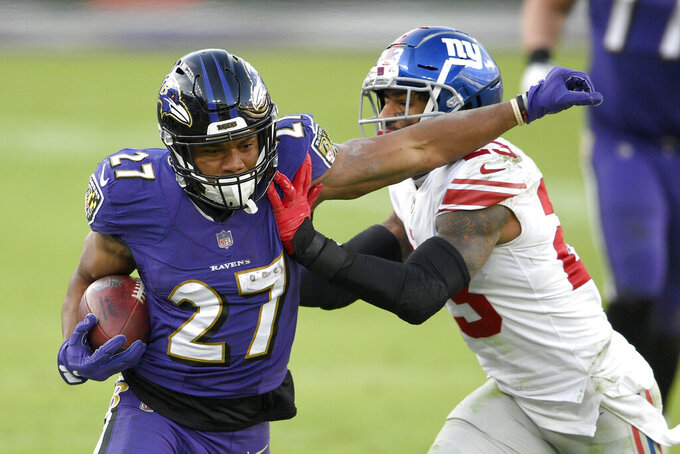 Baltimore Ravens running back J.K. Dobbins (27) is pushed out of bounds by New York Giants free safety Logan Ryan (23) during the second half of an NFL football game, Sunday, Dec. 27, 2020, in Baltimore. (AP Photo/Nick Wass)

The NFL has chosen 11 athletes from nine countries to compete for a spot in the 2021 International Player Pathway Program.

Instituted in 2017, the program aims to provide elite international athletes an opportunity to compete at the NFL level, improve their skills, and possibly earn a spot on an a team roster.

“Since its creation in 2017, this program has been a part of the league’s continuous efforts to strengthen the pipeline of international players in the NFL,” said Damani Leech, the NFL's international chief operating officer.

The Detroit Lions are investing $490,000 through grants to organizations as part of the team’s social justice initiative.

Lions players and ownership launched Detroit Lions Inspire Change after the 2018 season. This week, the team announced a list of grantees for 2021 who will receive funding.

Recipients include the Henry Ford Health System COVID-19 Emergency Needs Fund, as well as the Motor City Mitten Mission, which is dedicated to helping the homeless, the needy and the sick.

The Lions also said they would support The Empowerment Plan, which aims to elevate families from the cycle of homelessness by hiring single parents from local homeless shelters, as well as HAVEN’s Redefine program, a development course for high school and college-age men to help end gender-based violence. The team also listed the Pure Heart Foundation, which was designed to provide services to benefit the children of incarcerated parents.

“Through Inspire Change, we have been able to impact the local community in a personal way,” defensive end Trey Flowers said. “We understand that as an organization and as human beings, we must do our due diligence to inspire and uplift each other while we can. Our initiative helps those in need and provides a reminder of what society needs us all to do – and that is to give back.”

Vikings quarterback Kirk Cousins will make it through a sixth straight season – he first became a full-time starter for Washington in 2015 and signed with Minnesota in 2018 – without missing a game to injury. The only other NFL quarterbacks to do so during that span are Philip Rivers, Russell Wilson and Tom Brady.

Rivers and Wilson have started all 95 games since the beginning of 2015, one more than Cousins and Matt Ryan.

Cousins was held out of the final game in 2019 with Minnesota’s spot in the playoffs clinched. Ryan’s absence was in 2019, due to an ankle injury. Brady missed four games in 2016, but that was for a suspension from the league.

“There have been a lot of answered prayers,” Cousins said, adding: “Yes, I have taken a few hits. That’s part of the game. I think the key is my teammates and coaches have done a good job of preventing those hits that would actually keep you out.”

BRONCOS' "WE STAND FOR"

As part of the Denver Broncos’ Inspire Change program, the team had donated more than $250,000 to player-designated social justice programs in Colorado and the players’ local communities.

Players selected five Colorado programs and organizations to receive $40,000. The recipients include organizations that focus on education and youth, bail and criminal justice reform, and community mental health resources.

Also, five organizations selected by participating players and coaches have received a total of $52,500 through the Broncos’ “We Stand For” program, including The Justin Simmons Foundation.

Started this season, the “We Stand For” initiative provides players, coaches and staff the opportunity to use the club’s digital platforms and financial resources to support nonprofits working on social justice issues.

Simmons said he hopes the NFL continues pushing for social justice even after the events of 2020, including widespread protests, begin to fade.

“I hope that happens for years and years to come because we know how powerful the shield is and the NFL can be,” Simmons said, “and there could be a lot of good change coming with that support.”

DAK HAS RYAN'S SUPPORT IN REHAB

Sunday's matchup will be the first time the Cowboys and Giants have played since Dallas quarterback Dak Prescott sustained a season-ending ankle injury on a freakish play on Oct. 11 when he was tackled by New York defensive back Logan Ryan.

Ryan felt sick after the incident and had his people reach out to Prescott that night. He sent Prescott a couple of books to read.

While the two haven’t had a chance to talk during the season, Ryan knows what Prescott is experiencing. He fractured his left leg playing for Tennessee in a game against the Giants at the end of the 2018 season.

“I snapped my leg on a fluke play,” Ryan said Wednesday. “It really made me a better player, it made me become maniacal with my workouts, maniacal with my training. It was my first time missing football games, so I came back with just a deeper level of appreciation for the game and a deeper hunger and a deeper work ethic. I really started waking up earlier.

"I reached out to Dak soon after that (incident). Haven’t been in touch much since –- obviously we’re both pretty busy human beings at this time of the year –- but I wish him the best of luck and I’m sure he’s having a great recovery from what I’ve heard and what I’ve seen.”