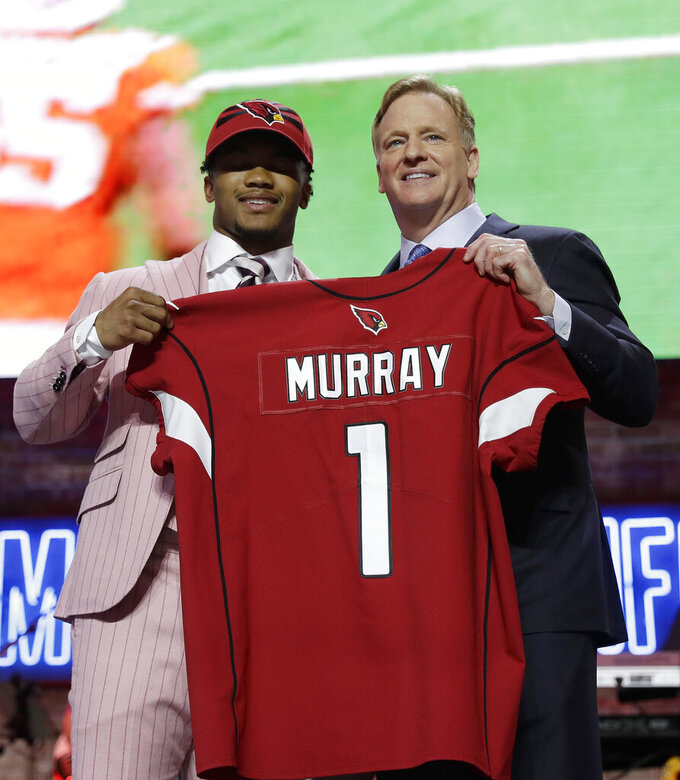 A thumbnail look at the players selected in the first round of the NFL draft Thursday night (x-denotes early entry).

Weaknesses: Kyler Murray is small. You might have heard.

Fact: First player taken in the first rounds of both the NFL and MLB drafts. Follows former teammate Baker Mayfield as the No. 1 overall choice, making Oklahoma the first school since Southern California in 1968-69 to produce the top pick in back-to-back years.

Strengths: Quick off the edge and relentless, just like his brother, Chargers star Joey Bosa.

Weaknesses: Maybe some durability concerns because last year's season-ending injury cut short the one season in which Bosa would have gotten a large volume of snaps.

Weaknesses: Could nitpick about his weight as he might be more comfortable playing in the 290s. That's about it.

Fact: One-year starter who made a case as the best player in college football in 2018 and now the highest-drafted Alabama defensive player since Cornelius Bennett in 1987.

Strengths: Solid in most areas and good at getting off blocks to finish plays.

Weaknesses: Sort of the opposite of Rashan Gary; not quite the athlete but plenty of production.

Strengths: Covers lots of ground and crushes ball carriers when he arrives.

Weaknesses: Can get out of position. More fast than instinctual.

Strengths: Combo of size and athleticism is top level.

Weaknesses: Decision-making was often questionable and release needs to be sped up.

Fact: Three years as a starter under coach David Cutcliffe, aka the guy who coached Peyton and Eli Manning in college.

Strengths: Size, speed, athleticism are all ideal. Even some room to add a few pounds if necessary.

Weaknesses: Some technique could use polishing, but not much to complain about.

Strengths: Best combination of athleticism, receiving skills and blocking in the class.

Weaknesses: Needs to fill out and become a more reliable blocker to reach star status.

Strengths: Lateral quickness, burst and ability to finish plays like a linebacker.

Weaknesses: Short and was allowed to roam and slant in college.

Weaknesses: Undersized, with a frame that might be maxed out, unlike Devin White.

Fact: Led Michigan in tackles the past two seasons.

Weaknesses: Shorter than ideal arms and relatively small frame for tackle could necessitate move to guard.

Fact: Three-year starter who moved to left tackle as a sophomore and was an All-American as a junior.

Strengths: Top-flight athlete with good power, long arms and sturdy against the run.

Weaknesses: Pass-rush production was spotty. Had 10½ sacks in three seasons, though was often used to tie up blockers.

Fact: Consensus No. 1 overall recruit coming out of high school in 2016.

Strengths: Good bloodlines. Father Chris Lindstrom Sr. is in the BC Hall of Fame and played three years in the NFL. Uncle and brother also played at BC.

Fact: He joins a Falcons offensive line that needs help after giving up 108 quarterback hits and was 31st in runs for no gain or losses.

Strengths: Big guy with a big arm who commands his offense.

Weaknesses: Heavy-footed and prone to fall back against pressure. Only 14 career starts.

Weaknesses: Light, with thin frame. Could be more of a third-down pass rusher than every-down player.

Strengths: Massive, but pretty light on his feet.

Weaknesses: Limited pass-rush potential, could slow him in pass-happy NFL.

Fact: Suspended for last season's College Football Playoff for failing an NCAA test for performance-enhancing drugs. Has said he had no idea why he failed the test.

Weaknesses: Better in pass protection than drive blocking for the run.

Weaknesses: Tore a ligament in his left knee in pre-draft workouts.

Fact: Was involved in a fight with a woman, whom he punched several times, while still in high school. Pleaded no contest to simple assault charge.

Weaknesses: Might be more of a slot receiver, motion-type tight end.

Fact: Fant was the hyped Iowa tight end going into last season, but Hockenson's emergence probably held down some of his production. Fant had 39 catches for 519 yards and seven touchdowns.

Weaknesses: Not ideal size for a safety and he needs to polish his open-field tackling.

Fact: Ran a 4.36-second 40-yard dash at the scouting combine and moved up draft boards after that.

Weaknesses: Needs to show more power as a run blocker.

Fact: Former two-star recruit who redshirted as a freshman and became a three-year starter at tackle.

Strengths: Athletic and hard-working, he transitioned from playing quarterback in high school and gained 87 pounds and grew 2 inches in college.

Fact: First Alabama State player to go in the first round.

Strengths: Bursts through holes and knocks tacklers back. Complete back who can block and catch.

Weaknesses: Will need to be better at avoiding contact at the next level.

Fact: Thanks to Alabama's wealth of talent, Jacobs left college with only 299 touches from scrimmage.

Fact: Cousin of Antonio Brown is nicknamed "Hollywood" for his Florida hometown and star qualities.

Strengths: Among freaky athletes, Sweat might be the freakiest with his 4.4 speed.

Weaknesses: A little top heavy means he needs to upgrade against the run.

Strengths: Tough against the run.

Weaknesses: Could be limited to playing close to the line of scrimmage.

Fact: Mississippi high school product who signed with Georgia originally, but transferred to the Bulldogs after a stop in junior college.

Weaknesses: Plays tall and inconsistent against the run.

Fact: Was suspended for bowl game as a freshman and was caught on camera kicking a USC player as a sophomore, but seemed to mature as an upperclassman.

Fact: Did not get much recruiting attention coming out of high school and didn't start until his senior season at TCU.

Weaknesses: On the small side and left some potential turnovers on the field.

Strengths: Remarkable and agility and size.

Weaknesses: He could struggle against edge rushers because of mediocre footwork.

Fact: He and his family have battled illnesses, his family lost its farm when he was in high school and a fire burned down their home, according to his draft profile on NFL.com.

Fact: Born on the Caribbean island of Saint Vincent and moved to Arizona with his grandmother.