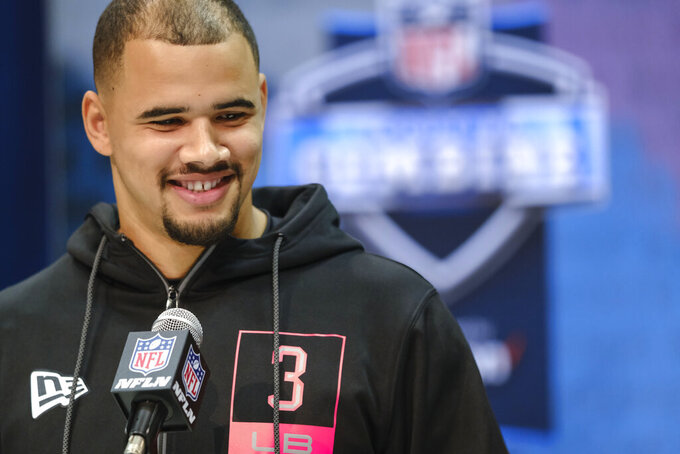 The NFL is embracing dexterity for the first time since the 1960s, when expanded rosters and the age of specialization ushered out the last of the great two-way players such as Chuck Bednarik and Les Richter.

For much of the last half-century, players who didn’t fit the mold were essentially taunted as “tweeners.” Now, they’re hailed as hybrids.

Panthers star running back Christian McCaffrey is handsomely compensated for his versatility, and Clemson star safety Isaiah Simmons is highly coveted for his all-purpose potential.

Versatility has become its own specialty.

Jeremiah sees the NFL following the same path the NBA took over the last decade or so as athleticism and rule changes revolutionized play. That blurred traditional positions and produced a more exciting style of play in which today’s centers are yesterday’s forwards, if not sharp-shooting 7-footers running the floor.

“We use the phrase in scouting, we talk about ‘position-less’ players, and that’s where it’s headed, where you’re not going to be labeling these guys anymore as a receiver or running back. No, they’re offensive weapons,” Jeremiah said.

He pointed to the likes of Austin Ekeler and McCaffrey, running backs whose hands are as fabulous as their feet, and to 49ers wideout Deebo Samuel, who averaged a jaw-dropping 17 yards per carry in the playoffs, including three runs for 53 yards in the Super Bowl.

“We saw a skill in Deebo, not only in being a traditional receiver but also just a guy who you want the ball in his hands,” 49ers GM John Lynch said. “I think perhaps part of the trickle up that has come from the colleges and such has opened a lot of people’s minds up to being creative.”

Added Jeremiah: “That’s where the value is. And then defensively, you’ve got to find a way to match up with those.”

Enter the likes of Chargers safety Derwin James and Clemson's Simmons, players whose versatility, Jeremiah said, “allows you to keep your guys on the field and not get manipulated where they can sub, get you in a look, crank the tempo, isolate the guy that’s out of position and go at him."

Defenders such as Simmons, LSU’s Patrick Queen, Wisconsin’s Zack Baun and Oklahoma’s Kenneth Murray won’t be labeled as linebackers anymore but as hybrids for their ability to rush the passer, cover the deep ball and mirror tight ends and running backs.

“It allows you to disguise your looks defensively, allows you to confuse quarterbacks and allows you to match up with the athletes you’re going to see,” Jeremiah said. “So those guys have never been more valuable.

“And one of the conversations that I’ve had over the last few years and really even more so this year is with the linebackers. It doesn’t matter if you are an unbelievably instinctive player and you’re tough and you’re physical. If you cannot run, they can’t hide you anymore. You’re going to get exposed. At that position you have to lean toward athleticism.”

“It used to be the 6-4 receiver was always outside and the 5-9 guy always had to be in the slot,” said Mark Dominik, SiriusXM NFL Radio host and former Buccaneers general manager. “Now, coaches are like, ’Let’s put the 6-4 receiver inside at the slot and let’s see if we can find mismatches that way."

The value of the versatile player really hit home for Dominik when McCaffrey, the only player in history with 2,500 yards receiving and rushing in his first three NFL seasons, signed a four-year, $64 million contract. It made him the game’s highest-paid running back “all because of his versatility.”

“Twenty-five years ago when I first was in the league, versatility used to mean a corner that could kick return,” Dominik said. “It’s not like that anymore, right? That’s all good, but can the corner move back to the safety in a pinch, or can can he go inside to the nickel, can he handle that?

"If you find those players, I think you put a little asterisk on them because they bring so much more to your roster.”