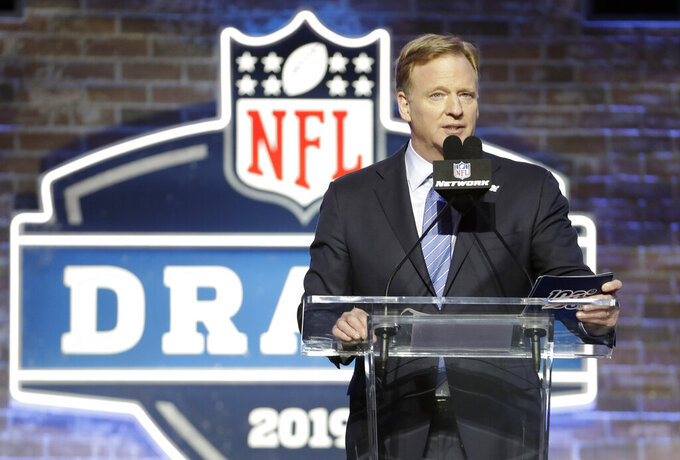 FILE - In this April 25, 2019, file photo, NFL Commissioner Roger Goodell speaks ahead of the first round at the NFL football draft in Nashville, Tenn. In a memo sent to the 32 teams Monday, April 6, 2020, and obtained by The Associated Press, NFL Commissioner Roger Goodell outlined procedures for the April 23-25 draft. The guidelines include no group gatherings. (AP Photo/Steve Helber, FIle)

The NFL draft will be conducted in a virtual format, with team personnel working from their homes.

In a memo sent to the 32 teams Monday and obtained by The Associated Press, NFL Commissioner Roger Goodell outlined procedures for the April 23-25 draft. The guidelines include no group gatherings.

“We have reviewed this matter in the past few days with both the competition committee and CEC (a group of league executives),” Goodell wrote, “and this will confirm that clubs will conduct their draft operations remotely, with club personnel separately located in their homes.”

All team facilities were closed on March 26 and Goodell has ordered them to remain shut indefinitely.

“We will reopen facilities when it is safe to do so based on medical and public health advice, and in compliance with government mandates,” he wrote.

The draft originally was scheduled to be held in Las Vegas, but the NFL canceled all public events last month as a safeguard against the coronavirus. On Monday, Goodell instructed the teams on how they should plan to make their selections.

“We have made this decision for several reasons,” he wrote. "All clubs will not have access to their facilities, which is contrary to the fundamental equity principle that all clubs operate in a consistent and fair way.

“Moreover, we want all NFL personnel to comply with government directives and to model safe and appropriate health practices. Our staff will carry out its responsibilities in the same way, operating in separate locations outside of our offices. And after consulting with medical advisers, we cannot identify an alternative that is preferable from a medical or public health perspective, given the varying needs of clubs, the need properly to screen participants, and the unique risk factors that individual club employees may face.”

Several team general managers had sought a delay in the draft, basically citing an unfair playing field. But the owners pushed for the draft, the NFL's biggest offseason event, to take place as scheduled. It is up to each team to ensure not only safe and healthy conditions, but to offset any perceived competitive imbalance under the guidelines set forth by Goodell.

“We are operating in an environment unlike anything we have experienced before,” Goodell added, “one that requires flexibility, patience, and cooperation.”

The ruling bars the New Orleans Saints from operating out of an expansive space in the Dixie Brewery.

Saints coach Sean Payton said last week that the he, general manager Mickey Loomis and a handful of other staffers were set up with video conferencing and other equipment at the brewery. The brewery is part of Saints owner Gayle Benson’s business empire in Louisiana and across town from team headquarters.

Payton said the club had gone to great lengths to ensure the setup conforms to Centers for Disease Control social distancing guidelines for workplaces. He said no one could enter the room without having their temperature scanned first and that everyone was remaining more than six feet apart.

The Saints did not immediately comment on the NFL’s decision or on the time and effort lost in having to vacate the setup and ultimately dismantle it.

Plans for televising the draft have not been finalized, though it is expected that ESPN and NFL Network will do so, perhaps in a joint effort.