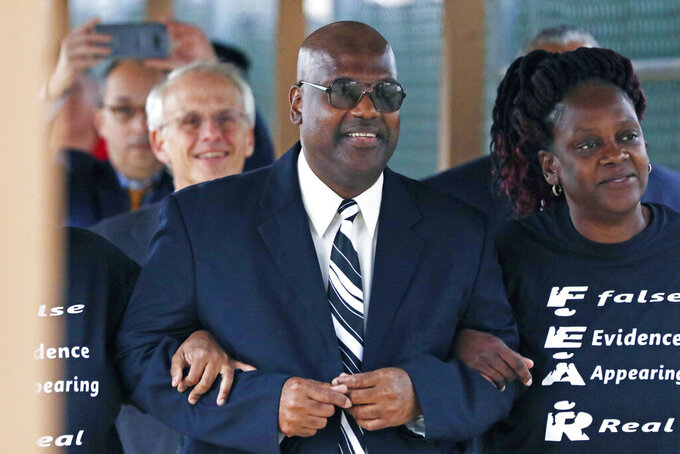 FILE - In this Monday, Dec. 16, 2019, file photo, Curtis Flowers flanked by sister Priscilla Ward, right, exits the Winston Choctaw Regional Correctional Facility in Louisville, Miss. The NFL says it is honoring Flowers, a Black man from Mississippi who was imprisoned more than 22 years. He was freed in late 2019, months after the U.S. Supreme Court threw out the last of his several convictions in a quadruple murder case. (AP Photo/Rogelio V. Solis, File)

JACKSON, Miss. (AP) — The NFL says it is honoring Curtis Flowers, a Black man from Mississippi who was imprisoned more than 22 years and was freed in late 2019, months after the U.S. Supreme Court threw out the last of his several convictions in a quadruple murder case.

The league said Wednesday on Twitter that Flowers is among those being recognized.

“I am so blessed, humbled, and thankful that the NFL and Roc Nation chose to include me to be honored in today’s movement for social change and justice," Flowers, who has maintained that he was wrongly convicted, said in a statement in the NFL tweet.

Roc Nation is an an entertainment company founded by Jay-Z. Its philanthropic arm, Team Roc, has been working on social justice issues, including pushing for better living conditions for inmates in Mississippi prisons.

“I am a life-long lover of the NFL and the work this organization does in our society,” Flowers said. "Thanks to my Lord, Jesus Christ, my family, friends, supporters, my dream legal team for this opportunity. I continually think about all of the men and women who are still unjustly incarcerated."

Mississippi Attorney General Lynn Fitch said in September that she would not try Flowers a seventh time in the 1996 slayings and a robbery that took place at a furniture store in Winona, Mississippi. He had been in custody since 1997.

Flowers was convicted four times: twice for individual slayings and twice for all four killings. Two other trials involving all four deaths ended in mistrials. Each of Flowers’ convictions was overturned.

In June 2019, the U.S. Supreme Court tossed out the conviction and death sentence from Flowers’ sixth trial, which took place in 2010. Justices said prosecutors showed an unconstitutional pattern of excluding Black jurors from Flowers' trials.

The Supreme Court ruling came after American Public Media’s “In the Dark” investigated the case. The podcast recorded jailhouse informant Odell Hallmon in 2017 and 2018 recanting his testimony that Flowers had confessed to him.

The first six trials were prosecuted by the local district attorney. Flowers was still facing the 1997 indictments in December 2019 when a judge agreed to release him on bond. The district attorney handed the case to the attorney general, and her staff spent months reviewing it before deciding not to go forward because of a lack of credible witnesses.