NFL HQ can relax: NFC East winner will have at least 8 wins 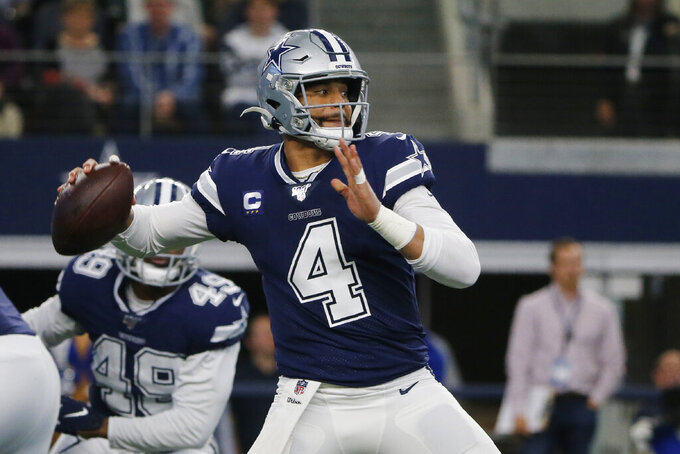 The folks at NFL headquarters can relax: The NFC East winner will have at least a .500 record.

That's barring a tie next week when Dallas visits Philadelphia, of course. And in this season of unpredictability — isn't December supposed to be dominated by the better teams? — anything from 55-55 to 3-3 in a blizzard could occur at Lincoln Financial Field.

It's been a year of supreme separation in the NFL. Forget competitive balance, there are a bunch of haves and just as many have-nots in 2019. Which makes it understandable that the league offices would have been under siege had a 7-9 NFC East champion hosted a 12-4 wild card, particularly when teams with winning records don't get into the postseason parade.

With Dallas' stunning turnaround romp past the Rams and Philly's improbable ability to pull out two victories over weak rivals despite being as injury ravaged as any team in football, the 7-9 prospect died. Although 7-8-1 with that equally unlikely tie happening is in the mix.

“Yeah, it’s exciting," Eagles quarterback Carson Wentz says. “The last couple weeks its been backs against the wall and that doesn't change. We got Dallas coming in and we know what that means to this city each week, regardless of the circumstances. But we also know the circumstances and what’s riding on it as well. We’ll be ready and we’ll be excited.”

The Cowboys won the first meeting and would clinch the division by marching into Philly and winning.

Yes, the Patriots head to the playoffs for the 11th straight season, a league record. They still need to secure their 11th consecutive AFC East crown, and the Bills have made that anything but a slam dunk. Buffalo, coming off a gutsy, knockdown, drag-out victory at Pittsburgh, don't look like the same Bills who get intimidated — and then blown out — in Foxborough. They meet next Sunday.

Houston's victory at Tennessee, a week after a monumental flop against Denver, lifted the Texans into the AFC South lead. The Texans host the Titans in the season finale, but could have already won the division if they win at sizzling but non-playoff qualifier Tampa Bay while the Titans fall against New Orleans next weekend.

One other AFC berth remains, and the Steelers' loss Sunday night kept Tennessee and Indianapolis in contention. Considering Pittsburgh still has a trip to Baltimore in the finale, and the Ravens clearly are the NFL's best team right now, the Steelers' prospects could be dicey.

Regardless, it's also become evident that the Ravens will be the biggest roadblock for any AFC opponent, and they'll secure home-field advantage throughout the conference playoffs with one more victory.

The NFC is more of a scramble among some very formidable squads, minus Dallas and Philadelphia, that is. Any team among the Saints, Seahawks, Packers, 49ers and Vikings could wind up the top seed. Which means any of them could be the sixth seed and facing a trip to the Big Easy or Bay Area or Lambeau Field or the Pacific Northwest or the Twin Cities in the wild-card round.

That, compared to facing the underachieving Cowboys or undermanned Eagles, is not a very enticing a prospect.

Green Bay and Minnesota figure to, well, figure out the NFC North on Monday night, Dec. 23 in Minneapolis. ESPN couldn't have asked for a more juicy closer to its season. The Packers, who hold a one-game lead on the Vikings, finish with awful Detroit, while Minnesota gets a tougher task against visiting Chicago.

“It's still all up for grabs," said Vikings QB Kirk Cousins, who was 19 of 25 for 207 yards with a touchdown and interception in a lopsided win at the Chargers. “Ten wins is a good place to be. We've put ourselves in a position to have a lot to play for these last two games."

Indeed, the Vikings aren't even certain to be part of the playoff field; the Rams could catch them by winning their last two with Minnesota falling twice. Judging by Sunday's results and performances — LA was a no-show in Dallas — forget that.

Finally, how about this: Seattle and San Francisco both are 11-3, the Seahawks holding on to win at Carolina, the Niners blowing a lead to mediocre Atlanta and losing at home. The Niners host the Rams next weekend, while the Seahawks are home for also-ran Arizona. In the finale, the 49ers are at Seattle, which won the first meeting.

Not only could that matchup be for the NFC West title, but it could be for top seeding in the conference.

Expect a flex of that game to prime time — a fitting way to end the NFL's 100th season.