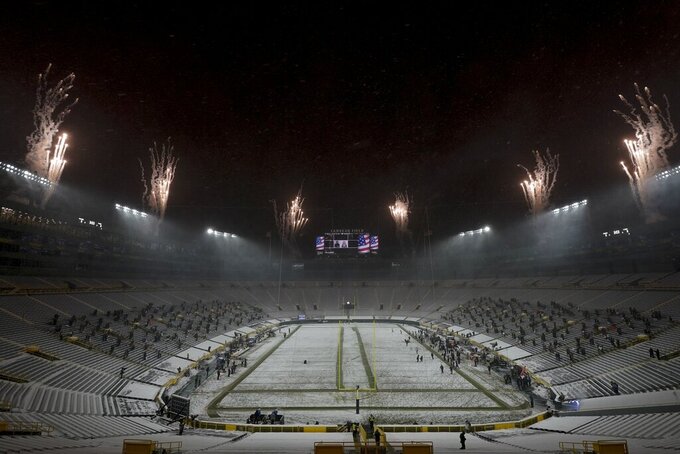 The seats in the end zone are empty at Lambeau Field during the national anthem before an NFL football game between the Green Bay Packers and the Tennessee Titans Sunday, Dec. 27, 2020, in Green Bay, Wis. (AP Photo/Morry Gash)

LOS ANGELES (AP) — The NFL is making additional advertising time available to its broadcast partners for the playoffs.

The increased ad sales are good news during a challenging season for the league and broadcasters. Ratings were down 7% during the regular season as the league dealt with challenges related to the coronavirus pandemic and increased interest in the presidential election.

“Due to strong demand from the marketplace, we worked with our broadcast partners to make additional ad units available for postseason games leading up to the Super Bowl,” NFL spokesman Alex Riethmiller said.

The league will allow networks to sell four more 30-second spots. The additional ads will not add to the length of the games.

Two of the spots will come by reducing league and broadcaster promotional spots. The NFL receives 90 seconds to two minutes of promotional time while broadcasters have four to five minutes during games for promotions.

The other two spots would likely be aired during other breaks in the action, like injury time outs.

NFL games average 70 30-second advertising units per game. There are at least four two-minute ad breaks per quarter as well as longer breaks at the end of quarters as well as halftime.

The postseason begins this weekend with three games apiece on Saturday and Sunday. There are two new wild-card games after owners voted last year to expand the field from six to seven teams in each conference. CBS and NBC have two games apiece while ESPN and Fox each have one.