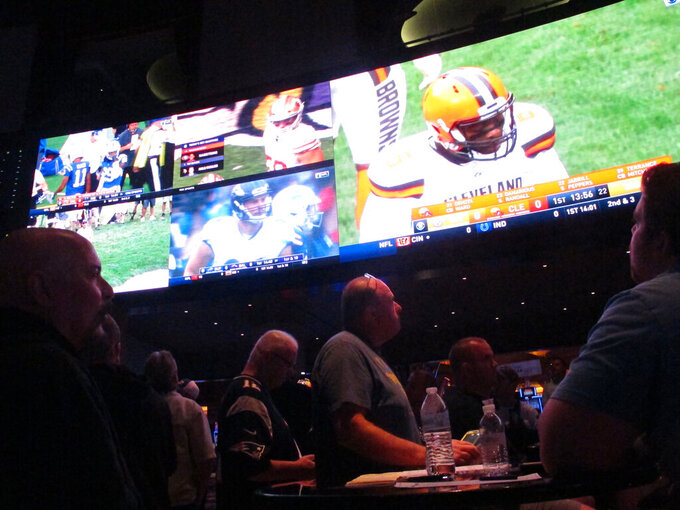 Football fans watch the action on wall-mounted video screens in the sports betting lounge at the Ocean Resort Casino, Sept. 9, 2018, in Atlantic City, N.J. On April 15, 2021, the NFL announced it has reached deals with Caesars Entertainment, DraftKings and FanDuel to become official sports betting partners of the league, sharing content and data. (AP Photo/Wayne Parry)

ATLANTIC CITY, N.J. (AP) — Once one of the staunchest opponents of allowing people to bet legally on its games, the NFL on Thursday announced deals with three major gambling companies to become official sports betting partners.

The league is partnering with Caesars Entertainment, DraftKings and FanDuel, all of which will get the use of NFL trademarks and official league data, and will integrate their own betting content into media properties including NFL.com and the league's official app.

“As the sports betting landscape has continued to evolve in the United States, we have been thoughtful with our strategy and are excited to announce three partners who share the NFL’s vision and goals,” said Renie Anderson, chief revenue officer and executive vice president of NFL Partnerships. “Working closely with Caesars, DraftKings and FanDuel, we will provide fans new and different ways of interacting and engaging with the sport they love.”

Caesars will continue as the league's official casino sponsor. The deal calls for to Caesars to create content and opportunities for engagement across its legal online sports betting operations and its nationwide network of retail sportsbooks.

DraftKings is renewing its role as the league's official daily fantasy sports partner. It will integrate content across NFL media properties, including a “prominent presence" on the NFL Red Zone channel.

FanDuel will have access to video footage from the league, and will work with the league on pre-game integration opportunities on the NFL Network for the seven regular season games the network will air in 2021.

The NFL was among the professional sports leagues that vehemently fought New Jersey's efforts to overturn a ban on legal sports betting in most of the country, opposing gambling as a perceived threat to the integrity of its games.

The deals were the logical extension of a trend that has seen gambling companies join forces with media companies and sports leagues to capitalize on the fast-growing legal sports betting market.

“Together, we will create new ways for football fans to share in the action of their favorite sport," Caesars CEO Tom Reeg said. “Football season will be more exciting than ever now that fans can enjoy an enhanced experience at our casinos, in our sportsbooks, and online.”

“The way fans consume sports years from now will look drastically different, and it will be due in part to forward-thinking collaborations like our expanded relationship with the NFL,” said Jason Robins, CEO, chairman and co-founder of DraftKings.

“On Super Bowl Sunday we got a glimpse at how powerful the combination of the NFL’s excitement and our platform can be in delivering an enhanced fan experience," said Matt King, CEO of FanDuel.

On Wednesday, The Associated Press began a partnership with FanDuel in which the sportsbook will be the AP's source of sports lines and betting odds.