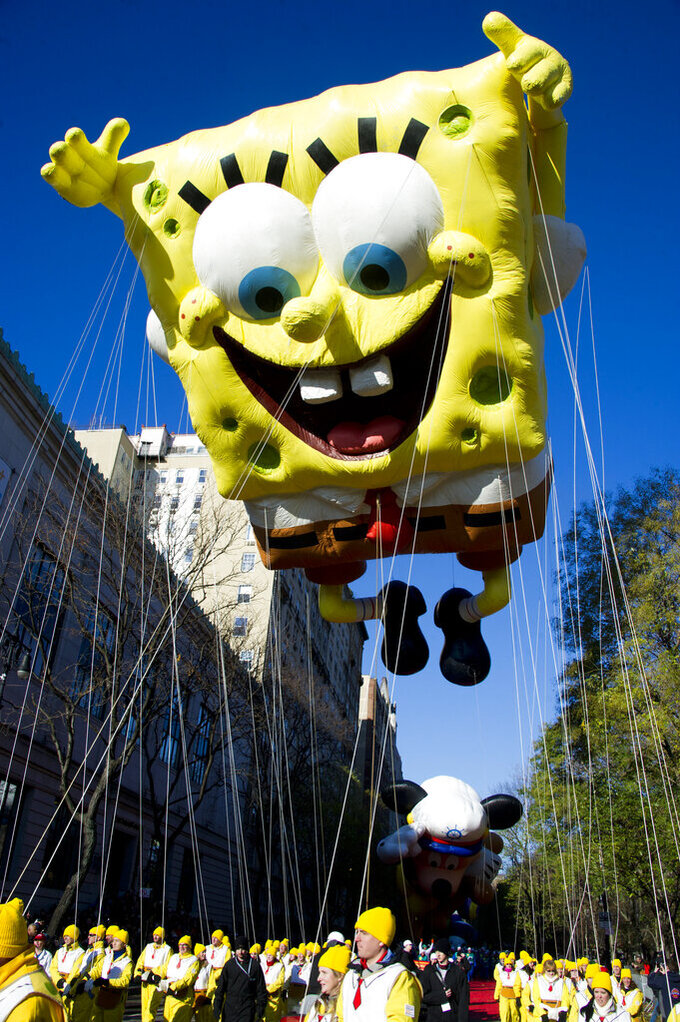 FILE - In this Nov. 4, 2011, file photo, the SpongeBob SquarePants balloon floats in the Macy's Thanksgiving Day Parade in New York. A sense of humor and a dash of creativity, along with memes from "The Office," "SpongeBob SquarePants" and the "Real Housewives" franchise, helped NFL teams' social-media crews tell the story of free agency in the age of the coronavirus before deals eventually were allowed to just be announced normally. (AP Photo/Charles Sykes, File)

A sense of humor and a dash of creativity, along with memes from "Friends," "SpongeBob SquarePants" and the "Real Housewives" franchise, helped NFL teams' social-media crews tell the story of free agency in the age of the coronavirus before deals eventually were allowed to just be announced normally.

It wasn't until Thursday -- the second day of the new league year -- that the NFL relented and sent around a memo saying it was OK for the 32 clubs to tell fans what was happening without, well, essentially pretending they didn't really know.

Here's the issue: Because of precautions owing to the COVID-19 pandemic, the league prevented players from going to club facilities. That meant that many contracts couldn't be finalized in a formal way, so the NFL told teams not to discuss them publicly.

Which led to all sorts of fun in the initial hours after the league year officially began Wednesday at 4 p.m. EDT.

The Arizona Cardinals not only made the biggest early splash, move-wise, by landing wideout DeAndre Hopkins in a trade with the Houston Texans, but the NFC West team also might have generated the most "likes" via social media.

"As you may know, NFL policy currently prohibits teams from making any official announcements. It does allow us to pass along media reports. And according to multiple reports, we have acquired WR DeAndre Hopkins via trade with the Houston Texans," the Cardinals' account tweeted.

As the day rolled on, that was followed by various memes with messages such as "That's all I can say" or "... but you ain't heard that from me" -- making NFL Twitter timelines read more like a text-message group chat -- interspersed with updates offered on other moves without actually announcing anything, so as to abide by the NFL's instructions.

Phrases such as "There are also rumblings (potentially)" and "We've also heard through the grapevine from multiple sources that other potential moves are potential" were trotted out, too. The feed sounded like something from a plugged-in reporter on draft night who's promised not to tip upcoming picks.

Ever aiming to stand out in the crowded social-media space, teams found other ways to skirt the one-day rule and keep folks informed.

The Chicago Bears tweeted reports from the league-owned NFL Network. Hard for the league to complain about that, right? Same for the Cleveland Browns' approach: They sent out a segment from that channel with a former player discussing what happened in free agency.

The Cincinnati Bengals created a montage of assorted tweets from reporters over a "SpongeBob" slide and wrote: "NFL policy currently prohibits teams from making any official announcements, but... WE REALLY, REALLY WANT TO TALK FREE AGENCY WITH YOU."

And so they did, furtively.

Other teams took the boring way out.

Maybe they followed instructions and keeping quiet -- notably the Tampa Bay Buccaneers, whose pursuit of Tom Brady was the biggest story of all, and the Super Bowl champion Kansas City Chiefs. Or just very plainly and matter-of-factly referenced trades that were official and could be revealed -- such as the NFC champion San Francisco 49ers or the Las Vegas Raiders, whose coach (Jon Gruden) and GM (Mike Mayock) both are former TV types who know a thing or two about promotion and publicity.

But by Thursday afternoon, according to the NFL memo obtained by The Associated Press, teams were told they could announce free-agency signings once the two sides reached agreement on terms and a written contract had been sent to the player and his agent.

That allowed teams to set the truth free, and they began operating as usual, blaring their news to anyone who scrolled through Twitter.

The Jacksonville Jaguars, for example, finally acknowledged the start of free agency about 22½ hours after it began, sending out an interview of coach Doug Marrone discussing the addition of linebacker Joe Schobert.

At the outset of the clip, Marrone addresses free agency as a whole, saying: "It's a little bit different, from the standpoint of finalizing things."

From the standpoint of announcing them, too.