NFL Notes: From purgatory to Pro Bowl for Cowboys' Frederick 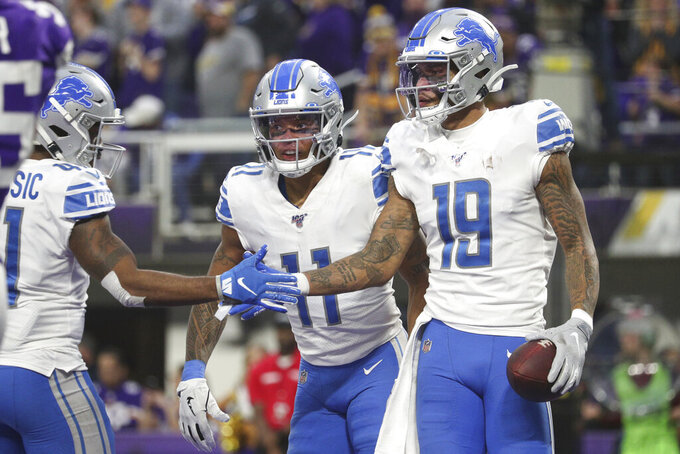 Detroit Lions wide receiver Kenny Golladay (19) is congratulated by running back J.D. McKissic (41) and wide receiver Marvin Jones (11) during an NFL game against the Minnesota Vikings, Sunday, Dec. 8, 2019 in Minneapolis. The Vikings defeated the Lions 20-7. (Margaret Bowles via AP)

Dallas Cowboys center Travis Frederick was selected to his fifth Pro Bowl this week. No big deal, except that he’s barely a year removed from not being able to lift weights because of an autoimmune disorder that attacks the nervous system.

Frederick hadn’t missed a game in his five-year career when he was diagnosed with Guillain-Barre syndrome during training camp last year. It wasn’t clear at the time how long he would be out, but Frederick ended up missing the entire season.

There were benchmarks on the road to recovery, such as hitting his max on the squat in the weight room and surpassing his personal best on another lifting technique. The next was starting a regular season game, and playing every week just as he used to do.

Now Frederick can say he has reached the Pro Bowl in the past five seasons he has played.

“The first one is always special because it’s such an unbelievable honor,” Frederick said. “Then, each one brings its own unique feeling to it. But after everything I’ve been through, this one means a lot to me.”

The 28-year-old center regained the starting job he had held since his first day as a rookie first-round pick in 2013. And while it has been an uneven season for Dallas' running game, the Cowboys have the NFL’s No. 1 offense. Without Frederick, quarterback Dak Prescott was sacked the second-most times in the NFL.

This year, he’s in the top five among fewest sacks.

“His impact has been significant," coach Jason Garrett said of Frederick. “Not only physically, but his ability to communicate and get everybody on the same page I think is critical, not only in the run game but in pass protection.”

Ezekiel Elliott did win one of his two rushing titles without Frederick last season, but he’s right up there with Prescott in being glad to have the 2016 All-Pro back.

“Last year, I know it had to be very scary for him,” Elliott said. “It was scary for me. Just to see where he was and being able to come back and play on such a high level and make a Pro Bowl — that’s crazy.”

The Miami Dolphins will honor their 1972 perfect season team, chosen the greatest in league history as part of the NFL 100 Greatest series.

The ceremony will take place Sunday at halftime of the Dolphins’ game against the Bengals.

“It’s always special to be around the guys who came together to accomplish what no other team in the 100-year history of the NFL has ever done — the perfect season,” said Pro Football Hall of Fame coach Don Shula, who will attend the ceremony and turns 90 on Jan. 4. “It’s only fitting as the league closes out this milestone season that the 1972 Dolphins are officially recognized with an honor that we always knew was true — that they are the greatest team in NFL history.”

The 1972 Dolphins went 17-0 for the only undefeated, untied season in league history. Since September, the NFL 100 Greatest series has highlighted the 100 best plays, games, characters, game changers and teams in NFL history.

Detroit Lions receiver Kenny Golladay is leading the NFL with 10 receiving touchdowns, ranks third with 18.8 yards per catch and is among league leaders with 1,052 yards receiving.

Those numbers, though, were not good enough to earn him a spot in the Pro Bowl.

“I feel like I’m still flying under the radar right now, which is cool with me,” Golladay insisted.

Golladay was a third-round draft pick of the Lions in 2017 out of Northern Illinois after playing two seasons at North Dakota. He has two straight 1,000-yard seasons, and has 154 catches for 2,592 yards and 18 touchdowns in three years in the NFL.

The Eagles are lending a supportive hand to 22 Philadelphia-area non-profit organizations.

The team announced this week that its Eagles Social Justice Fund of the Philadelphia Foundation awarded grants totaling $373,000 to organizations that work to reduce barriers to equal opportunity, with a specific focus on education, community and police relations, improving the criminal justice system, and other initiatives targeting poverty, racial equality, and workforce development in the Greater Philadelphia area.

Among those receiving grants are Community Legal Services, Philadelphia Bar Foundation, Philadelphia Youth Network and Why Not Prosper, which each got $25,000, and Philadelphia Futures, which received $20,000.

The Eagles Social Justice Leadership Council is comprised of a small collection of players and club executives, and works to identify potential grant recipients and secure contributions to the Eagles Social Justice Fund. Players on the council include Malcolm Jenkins, Rasul Douglas, Avonte Maddox, Jalen Mills and Rodney McLeod.

“Reading through each grant application was incredibly motivating and we are proud to support so many non-profits in the Greater Philadelphia area that work year-round to create impact,” Jenkins said. “These non-profits are providing a spectrum of services to make our community better."

In just two years, the Eagles Social Justice Fund has provided area-based organizations with more than $858,000 in funding.

“I am incredibly proud of our players for their transformative work as members of the Eagles Social Justice Leadership Council,” said Eagles chairman and CEO Jeffrey Lurie. “Their collaborative efforts with policy leaders, advocates, grant recipients, and local organizations have led to meaningful change in our region and around the country.

“By reducing barriers to equal opportunity, bridging gaps, and supporting a prism of social justice programs and causes, our players are creating a brighter, more inclusive future for our communities."

Cam Newton is helping call the shots off the field, too.

The Carolina Panthers quarterback is an executive producer for a new series for the mobile-first media technology platform Quibi called, “Iron Sharpens Iron," which was created by Newton's Iconic Saga Production and Liquid Light and features joint workouts between top professional athletes.

Newton and Atlanta Hawks point guard Trae Young will be the first athletes featured in the series during which they share training secrets and discuss sports science and fitness. UFC champion Amanda Nunes and U.S. Women’s National Team captain Carli Lloyd are among the other athletes confirmed as a pairing.

Julio Jones is looking to catch more history this weekend.

The Atlanta Falcons wide receiver had 13 receptions for 134 yards and two touchdowns in a 29-22 win over San Francisco last week, giving him 11,881 career yards receiving. That surpassed both Torry Holt (11,864) and Jerry Rice (11,776) for the most by a player in his first nine NFL seasons.

The 30-year-old Jones is expected to appear in his 125th career game Sunday when Atlanta faces Jacksonville. He needs 119 yards receiving to surpass Rice (142 games) as the fastest player to reach 12,000 career yards receiving.