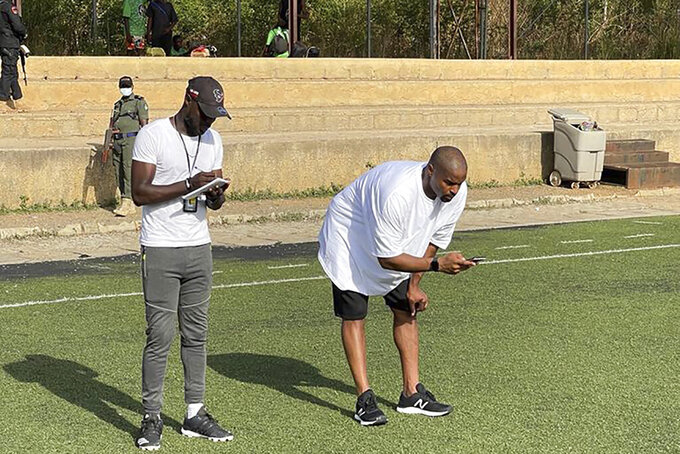 This image provided by the NFL shows former NFL player Osi Umenyiora taking 40-yard dash times during practice runs at the Uprise Camp in Nigeria, April 25, 2021. The NFL is opening a pathway for African players with a developmental camp in Ghana. It will feature players who previously participated at regional events led by Osi Umenyiora, the two-time Super Bowl-winning defensive end with the New York Giants. (Sope Isaac Kuyinu/NFL via AP)

The NFL is opening a pathway for African players with a developmental camp in Ghana.

Following a camp this past weekend with Cleveland Browns linebacker Jeremiah Owusu-Koramoah, who is of Ghanaian descent, the league announced a three-day camp will take place in the capital of Accra in June. It will feature players who previously participated at regional events led by Osi Umenyiora, the two-time Super Bowl-winning defensive end with the New York Giants.

Specific dates in June for the camp and a fan event have not been set, but the camp received the endorsement last weekend of Ghana's vice president, Dr. Mahamudu Bawumia.

“To bring the NFL to Africa has long been a dream of mine,” said Umenyiora, whose parents are Nigerian. "Today that dream is a reality. The opportunities that will come to so many Africans cannot be understated, and we are thankful for them. We cannot wait to show the world what we can do.”

Umenyiora established The Uprise, a football program in Nigeria, and has held regional camps in South Africa and Ghana, with an upcoming camp in Nigeria. Players who impress at the three camps will be invited to the NFL’s camp in Accra. The idea is to further identify and develop talent in Africa.

Through Umenyiora and The Uprise three Nigerian athletes — Kehinde Hassan Oginni, Chigbo Roy Mbaeteka and Haggai Chisom Ndubuisi — earned the opportunity to participate in the NFL’s International Combine in London last October. They were then selected to train in the United States as part of the International Player Pathway program.

“We look forward to hosting our first camp in Ghana and will look to activate in Nigeria and other African countries in the future,” said Damani Leech, the NFL chief operating officer for international events. “We want to provide an opportunity for the next generation of African prospects to showcase ... their talent. As we continue to look for ways to strengthen the pipeline of international players in the NFL, we hope this camp, and future camps, provide a path forward for aspiring players from across the continent.

"We are excited about the potential to identify talent to participate in international combines, the International Player Pathway program, and for those athletes ages 16 to 19, the opportunity to attend the NFL Academy in London.”

As the NFL searches for potential players globally, it has held international combines in the United Kingdom, Australia, and Germany. This season, in addition to four regular-season games in London, the NFL will play for the first time in the regular season in Munich.