NFL players past and present want more action from owners 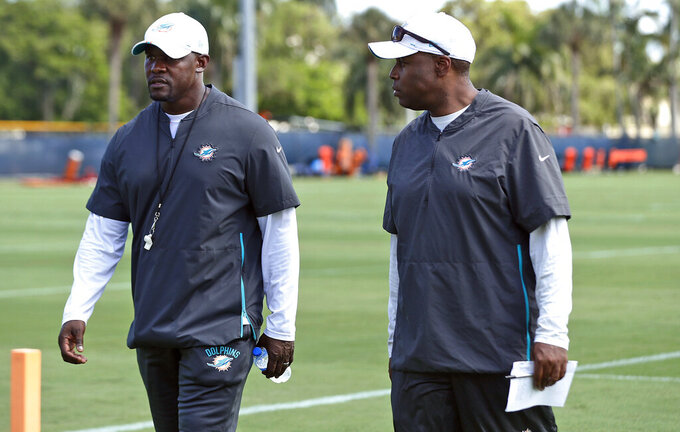 FILE - In this May 10, 2019, file photo, Miami Dolphins coach Brian Flores, left, and general manager Chris Grier walk off the field at NFL rookie camp in Davie, Fla. Flores and Grier are among the six Black coaches, general managers and high-ranking executives in the NFL. (AP Photo/Brynn Anderson, File) 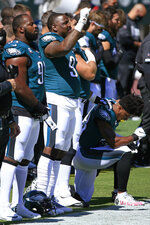 Philadelphia Eagles defensive tackle Malik Jackson has a suggestion that has been voiced by many people from players to activists. He wants owners to hire more Black coaches, general managers and high-ranking executives.

“As an employee, it’s hard for me to tell an owner what to do. As a Black person, I would like to see more guys hired that look like me,” Jackson said last month. “I think we have a league that 70% of the people who play look like me. It would be nice for the upstairs to look like that. I just think something should be done.”

Jaia Thomas, an attorney and founder of Diverse Representation, agrees with Jackson. She praised the NFL's external efforts with various initiatives but wants the league to take more internal action.

“Black players will continue to be frustrated and feel as though their voices aren’t being heard if there aren’t people in the decision-making rooms who look like them,” Thomas said. “I think more should be done to diversify not just the coaching staff of the NFL ranks but also the owners and all of upper management.”

Eagles chairman and CEO Jeffrey Lurie is one of the most proactive owners in the league along with Miami’s Stephen Ross, Jacksonville’s Shad Khan, Atlanta’s Arthur Blank, Minnesota’s Zygi Wilf and Pittsburgh’s Art Rooney II. Lurie has been outspoken about social justice issues and was critical of the state of race relations in America.

“I’m very close to some of them, and they suffer, and they’re embarrassed by our country and embarrassed and hurt,” Lurie said of fellow owners before the start of the season. “And we know we have to listen, because we don’t even understand it as well as those that are particularly oppressed.”

Broncos President and CEO Joe Ellis marched with players at a peaceful protest in downtown Denver in June.

“The one thing we can’t do is we can’t drop it,” Ellis said. “We have to stick with it. If you remember what happened back in ’17, we all got on this train to take good steps and really some significant steps to get players involved in certain platforms and programs in the community to address social justice, social iniquities, racism and things of the like. We did it for a while, and we kind of lost interest and it kind of got back to where it was.

Jackson emphasized the need for all owners to speak out and take real action.

“Until every individual owner starts doing something and not hide behind the shield, I personally feel like it’s not going to mean anything,” Jackson said. “And I know Mr. Lurie is doing a good job of working with us and getting in this community and helping us. And so, if we can get the other owners to be like Mr. Lurie, then I think it will be a stronger message than just holding hands around an NFL logo while somebody sings a song. To me, that just doesn’t do anything.”

League owners have come a long way since Jerry Jones demanded a few years ago that players on the Dallas Cowboys must stand for the national anthem, and declared his team wouldn’t play if anyone was “disrespectful to the flag.” Now, many owners say they understand that the movement Colin Kaepernick started in 2016 was meant to protest against racism and point out police violence. NFL Commissioner Roger Goodell even apologized to Kaepernick and players for not listening to them sooner.

“It is not about the flag,” Goodell told Emmanuel Acho in an interview on the former NFL linebacker’s “Uncomfortable Conversations With a Black Man” series. “The message here that what our players are doing is being mischaracterized. These are not people who are unpatriotic.”

While President Donald Trump and his supporters continue to criticize players who kneel, Jones has accepted such demonstrations following Goodell’s apology to the players and vow to support players. Cowboys defensive lineman Dontari Poe became the first player on Dallas to take a knee during “The Star-Spangled Banner” and plans to continue doing it.

“I talked to Jerry and hopefully in the future me and him can have more talks. It was all positive from both ends,” Poe said Wednesday. “It’s a lot of stuff we can still go forward and talk to each other as men, him and his life experience are different from mine."

"There are several owners that don’t actually understand the depths of what is going on or why people are protesting about it. There’s still a little discrepancy around that. So everybody needs to get on the same page and then figure out how they can act in their communities.”

Hall of Fame running back LaDainian Tomlinson says “activism is a lifelong fight.”

“It’s going to take everyone unifying on the same front and doing whatever we can to change legislation," he said. "That’s where it’s going to start.”