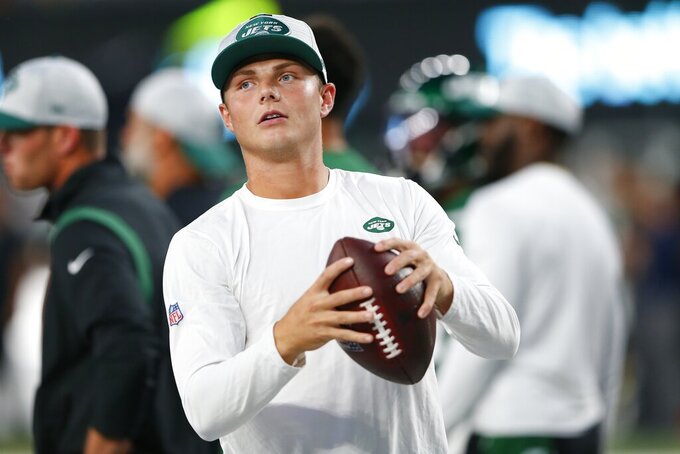 There's a quarterback youth movement that has hit the NFL.

With five QBs drafted in the first round for the second time in the past four seasons, the NFL has a staggering number of young quarterbacks led by the three projected rookie starters: Trevor Lawrence in Jacksonville, Zach Wilson for the Jets and Mac Jones in New England.

This will be the second season since the merger when more than two rookie QBs start in Week 1, following the 2012 class that had Andrew Luck, Robert Griffin III, Ryan Tannehill, Brandon Weeden and Russell Wilson all start the opener.

The youth movement has really hit the AFC East, where all four Week 1 starters are age 25 or younger, with Buffalo's Josh Allen (25) and Miami's Tua Tagovailoa (23) joining Wilson (22) and Jones (23).

The last time a division had four starting Week 1 QBs that young came in 1983 when the AFC East did it with Dan Marino, Ken O’Brien, Tony Eason and Art Schlichter. This will be the fourth time since the merger that two rookie QBs in the same division started the opener, with Dallas' Dak Prescott and Philadelphia's Carson Wentz doing it in 2016.

In all, the NFL is projected to have 13 quarterbacks age 25 or younger starting in Week 1, tied for the second-most ever to the 16 that did it in 2013.

On the other end of the spectrum, Tampa Bay's Tom Brady will be the first 44-year-old quarterback to start a season opener after previously being the first to do it at age 42 and 43.

The only players older than Brady to appear in a Week 1 game are kickers George Blanda, Adam Vinatieri and John Carney.

Blanda will remain the oldest to throw a pass. He went 4 for 11 for 64 yards and a TD to Raymond Chester for the Raiders against the Steelers in a relief effort on his 45th birthday in 1972.

No franchise can match the Cleveland Browns when it comes to starting off the season on the wrong note. The Browns are 0-15-1 in their past 16 openers since beating Baltimore 20-3 in 2004 with Jeff Garcia at quarterback.

The Browns open at Kansas City, which is tied with Green Bay for the longest active Week 1 winning streak at six games in a row. The Chiefs have won 14 straight September games since a 19-12 loss at Houston in 2016.

The other team that has been dominant early is Baltimore, which has outscored opponents 177-26 in winning the past five openers.

In 17 of the past 18 seasons, at least two teams that missed the playoffs the previous year ended up as division champs.

In all, 59 teams have done it, with Pittsburgh and Washington joining that group in 2020. That should give hope to plenty of teams, with 24 of those teams having gone from last to first in one year.

At least one team has done it in 16 of the past 18 seasons. The teams looking to pull off that trick in 2021 are the Jets, Cincinnati, Jacksonville, Denver, Philadelphia, Atlanta, Detroit and San Francisco.

For 31 straight years, at least four teams that missed the playoffs the previous year have made it to the postseason.

There have been only five Week 1 matchups between first-year coaches since 1983 and never two in the same season until this year. The previous matchups were Bill Parcells—John Robinson in 1983, Dennis Green-Mike Holmgren in 1992, Dick Jauron-Guenther Cunningham in 1999, Al Groh-Mike Sherman in 2000 and Bill O'Brien-Jay Gruden in 2014.

Few players have been worked as hard as Tennessee running back Derrick Henry the past two seasons. Henry became just the third player in the past 10 seasons to have at least 400 touches in the regular season and playoffs in back-to-back seasons.

The last player before Henry to do it was Le'Veon Bell, who then sat out the next season in a contract dispute. The last player to suit up after back-to-back 400-touch seasons was Ray Rice, who hit the mark in 2010-12. Rice then was held to a career-low 3.1 yards per carry in 2013.