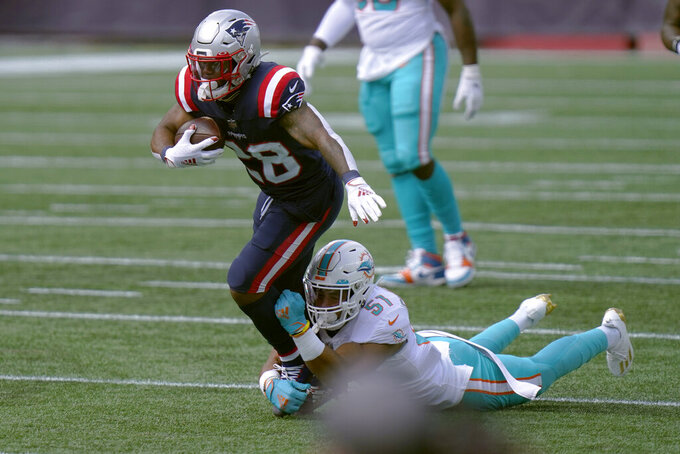 File-New England Patriots running back James White (28) runs with the ball as Miami Dolphins linebacker Kamu Grugier-Hill (51) tackles him in the first half of an NFL football game, Sunday, Sept. 13, 2020, in Foxborough, Mass. White says he is is having trouble processing the sudden death of his father, but is finding comfort in celebrating his son's first birthday. (AP Photo/Steven Senne, File)

FOXBOROUGH, Mass. (AP) — Patriots running back James White says he is having trouble processing the sudden death of his father, but is finding comfort in celebrating his son's first birthday.

In an Instagram message Tuesday, White posted side by side photos of himself as a child sitting on the lap of his father, Tyrone, and another of White holding his 1-year-old son, Xzavier.

“Happy 1st birthday Xzavier! I hope I can be as good of a father to you as my father was to my brother and I!” White wrote. “I still can’t quite process everything that’s going on right now but when I look at you, you give me life! May you Rest In Peace, Dad. We miss you much already.”

Tyrone White, 59, was killed Sunday when the car occupied by he and his wife, Lisa, collided with another vehicle in Cooper City, Florida, authorities said. White, who was a captain in the Miami-Dade Police Department, was pronounced dead at the scene. Lisa White remains hospitalized.

James White found out about the crash prior to the Patriots' matchup at Seattle on Sunday night and was inactive for the game.

In the days since, his teammates and scores of players and coaches around the NFL have voiced condolences for White both publicly and on social media.

The list included Seahawks quarterback Russell Wilson, a teammate of White's at Wisconsin, who began his postgame interview after Seattle's win on Sunday by sending his well wishes.

“My heart’s been heavy all day thinking about him," Wilson said. “This year’s been a tough year as a whole and a lot of people that we know (are impacted) and people just going through so much. But James, I’m praying for you man.”

A soft-spoken presence in New England's locker room, White is best known for scoring three touchdowns, including the game-winner in the Patriots' comeback Super Bowl win over Atlanta in the 2016 season. But he is one of the most-respected players on the roster, evidenced in him being named a team captain each of past three seasons.

“There are few people that come into your life that do EVERYTHING the right way. James is one of them,” Tampa Bay quarterback and former teammate Tom Brady wrote in an Twitter post. "Kind, gentle, loving, fiercely competitive and hardworking. His parents raised an amazing son. And we are all grieving with James as he is going through this difficult time. Love you my friend.”

Prior to the season, White spoke at length about conversations he remembered having growing up with his father about interacting with police that have resonated with him in recent months in the midst of social justice protests that followed the shooting deaths of George Floyd, Breonna Taylor, Jacob Blake and others.

“My dad always taught me, even though he is a cop ... in his uniform job (and as) a Black man in society those things that happened to George Floyd can happen to me, can happen to my dad, can happen to any person of color in this world,” White said.

White said those conversations have stuck with him as he’s gotten older.

“My dad always made me aware of what I should do when I get pulled over and things of that nature and how to treat cops," he said. "I see both sides and I’ve heard a lot of stories from my dad from that perspective, so it helped shape me growing up.”

Miami Dolphins coach Brian Flores, a former Patriots assistant, said White has the support of his “football family” across the NFL.

“His dad was a truly great, great, great man who did a lot for a lot of people. I think people need to know about that,” Flores said.

Sunday marked just the second game White's missed in the past three seasons. His status for this Sunday's home matchup with the Las Vegas Raiders is unknown.

But Patriots teammate Matt Slater said everyone understands that football is secondary for White right now.

“There are things in life that are so much bigger than this game and I think today was a reminder of that," Slater said. “For our brother to lose his father and parents to be in an accident like that, I think it hit us all in the heart.. ... He serves us in so many ways and we’re so thankful and fortunate to have a guy like that."