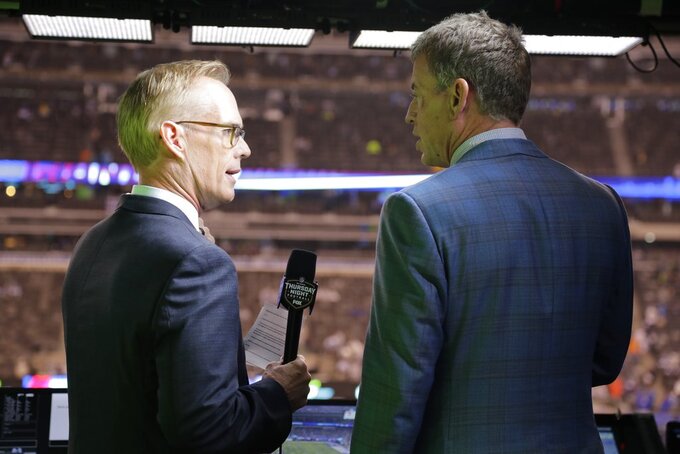 FILE - This Oct. 11, 2018, file photo shows Troy Aikman, right, and Joe Buck working before an NFL football game between the New York Giants and the Philadelphia Eagles in East Rutherford, N.J. "I remember opening weekend when I got home I had a couple college buddies that were raving about the pregame show and how great and fun it was with everyone," said Aikman, who was Cowboys quarterback in 1994 before joining the network seven years later. "It was refreshing, new and unique, and that set the tone for the network."(AP Photo/Frank Franklin II, File)

All of the NFL television partners have reason to be happy at the end of the regular season — all five packages showed increases following years of declines.

The league showed a 5 percent increase this season as an average of 15.8 million viewers tuned into non-London games. It was a year largely devoid of off-field controversy after ratings decreased 9.7 percent last season and 8 percent in 2016.

Neal Pilson, the former president of CBS Sports who now runs his own sports television consulting company, said the increases are due to a number of factors which include better prime-time matchups and most of the big-market teams doing well.

The biggest improvement belonged to ESPN's "Monday Night Football," which was up 8 percent over last season. The most-watched game was the Nov. 17 matchup between Kansas City and the Los Angeles Rams, which attracted 16.7 million viewers. The game was originally scheduled for Mexico City, but it was moved to Los Angeles due to poor field conditions at Azteca Stadium. The Rams won 54-51 in the highest-scoring game in the series' 49-season history.

"The league is finally giving ESPN a strong package of games. For many years I thought it wasn't good, but at the beginning of the season I thought their ratings would improve because of the schedule they had," Pilson said.

The CBS Sunday afternoon package and NBC's "Sunday Night Football" both experienced 6 percent gains. CBS averaged 16.5 million viewers, and had three of the five most-watched games. The Nov. 22 Thanksgiving Day game between Chicago and Detroit averaged 26.6 million, which was second across the league. Two games featuring the Pittsburgh Steelers — Dec. 16 vs. New England (24.6 million) and Dec. 23 at New Orleans (24 million) — also placed in the top five.

CBS has the Super Bowl on Feb. 3 and is expected to have an update on ad sales next week when it holds a briefing with reporters about the network's plans for this year's game.

NBC averaged 19.3 million viewers and had seven games that topped 20 million, compared to four last season. The Nov. 4 matchup between the Green Bay Packers and New England Patriots averaged 23.7 million, and was the largest prime-time audience on any network since ABC aired the Academy Awards last March.

"Thursday Night Football," which was down at midseason on Fox, had many strong matchups in the second half and finished with a 4 percent increase, averaging 14.9 million viewers. Last season's 10-game package, which was split between CBS and NBC, averaged 14.1 million.

The Nov. 29 game between New Orleans and Dallas averaged 21.4 million and was the fourth-most watched game in prime time this season. Besides compelling late-season games, Pilson said having the package on one network for 10 straight weeks was a big benefit.

Fox's Sunday afternoon ratings were flat at midseason, but finished up 2 percent for the year, averaging 18.0 million. The Thanksgiving Day contest between Washington and Dallas was the most-watched game in the regular season with 30.5 million viewers. The Cowboys' Dec. 2 game against the Eagles was third at 25.2 million.

Even though Fox continues to mostly air NFC games and CBS has the AFC, those lines have started to blur a little more as the league has flexed games between the two networks so as to provide the best ratings. For example, CBS had the doubleheader on Oct. 21 and its featured game was Dallas at Washington.

Pilson thinks the league's ratings momentum should carry into the playoffs, which begin Saturday. As far as a Super Bowl matchup that could deliver the best rating, Pilson favored Dallas-New England or Dallas-Kansas City.