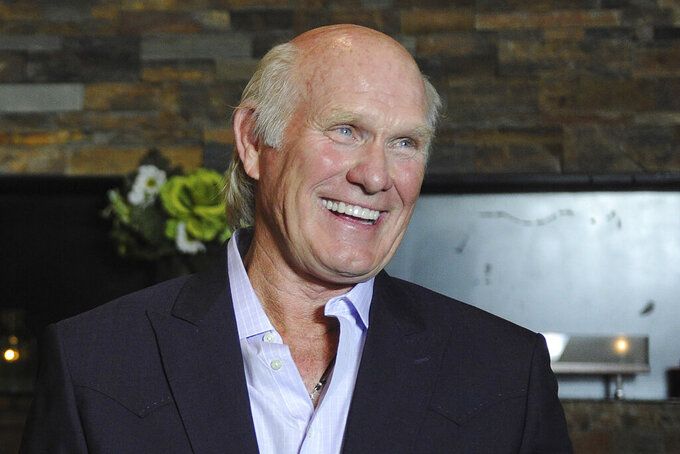 FILE - In this April 4, 2012, file photo, Hall of Fame quarterback Terry Bradshaw smiles in Nashville, Tenn. From a sackmaster defensive tackle to a do-everything running back, the list of the NFL’s greatest characters, numbers 31-100, is impressive. (AP Photo/Joe Howell, File)

From a sackmaster defensive tackle to a do-everything running back, the list of the NFL's greatest characters, numbers 31-100, is impressive.

As much for their personalities as their impressive performances on the field.

The NFL revealed results Friday night of balloting conducted by The Associated Press in conjunction with the league's celebration of its 100th season. The top 30 in voting by a nationwide panel of 60 football historians and media who regularly cover the NFL will be announced next Friday night.

Pro Football Hall of Famer John Randle, who retired with the most sacks for his position of anyone, came in at No. 31, one spot in front of the always-entertaining and sometimes out of control Terry Bradshaw. While Bradshaw was recognized in great part for his uninhibited TV persona, Randle scored so high for his face-painting before games and his elaborate, often comical sacks dances.

The list includes such never-back-down coaches as Rex Ryan (No. 43) and Jimmy Johnson (No, 62) — How 'bout them Cowboys? How 'bout that hair? Mean Joe Greene (No. 33), who never was particularly mean, rode his Coca-Cola commercial as much as anything to make the list, one spot in front linebacker Thomas "Hollywood" Henderson, who many times lived up to his dramatic nickname.

Speaking of which, how about Billy "White Shoes" Johnson and his sensational dance celebrations? He came in at No. 44.

Just to prove these weren't just characters, but dynamic players, Hall of Famers among this group are Randle, Bradshaw, Greene, Hendricks, Nagurski, Bednarik, Lewis and Lambert. Plus Michael Irvin (No. 41), Randy Moss (45th), Shannon Sharpe (51st), Walter Payton (56th), Sammy Baugh (61st), Michael Strahan (69th), and Jerome Bettis (98th). No surprise that some of them had cool nicknames, too: The Playmaker; Sweetness; Slingin'; and The Bus.

No. 100 was former Cowboys running back Walt Garrison, who also did TV commercials.

This story has been corrected to show that John Randle is No. 31, not No. 30, on the list of the NFL's greatest characters.