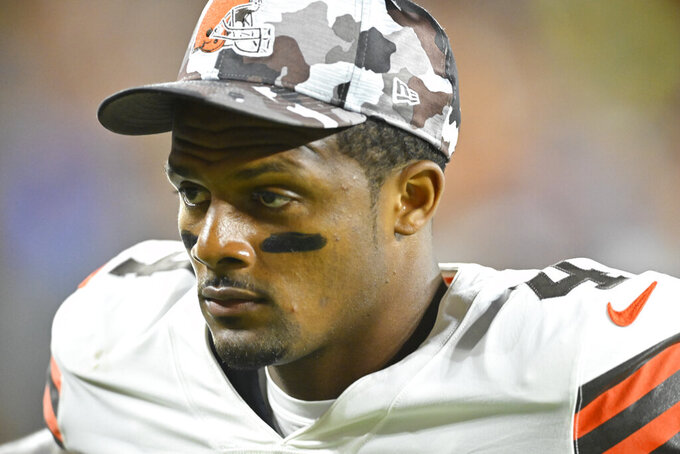 FILE - Cleveland Browns quarterback Deshaun Watson (4) leaves the field at the end of the first half against the Chicago Bears in an NFL preseason football game, Saturday, Aug. 27, 2022, in Cleveland. Suspended Cleveland Browns quarterback Deshaun Watson’s status has not been affected by a new civil lawsuit filed against him by another woman claiming sexual misconduct two years ago, the NFL said. Watson is serving an 11-game suspension for alleged sexual misconduct while he played for the Houston Texans. (AP Photo/David Richard, File)

BEREA, Ohio (AP) — Deshaun Watson's status with the NFL has not changed even though the suspended Cleveland Browns quarterback has been named in a new civil lawsuit by another woman alleging sexual misconduct two years ago.

Watson is almost halfway through serving an 11-game suspension for alleged sexual misconduct while he played for the Houston Texans. Two dozen women previously claimed he was sexually inappropriate during massage therapy sessions.

On Thursday, a 26th woman filed a lawsuit in Texas that alleges Watson pressured her into performing a sex act after a massage in 2020. Watson has settled 23 of 24 previous lawsuits filed against him, one was dropped.

NFL spokesman Brian McCarthy said the latest lawsuit does not impact Watson's current standing. However, the 27-year-old could face more discipline if he is found to have further violated the league’s conduct code.

“We will monitor developments in the newly-filed litigation; and any conduct that warrants further investigation or possible additional sanctions would be addressed within the Personal Conduct Policy,” McCarthy said in an email Friday.

Because the latest allegations were from an encounter in the same time frame as the others, and it took place before Watson agreed to a settlement, there's no need for the league to act. As long as Watson abides by conditions of his agreement with the league, he'll be eligible to play again in December.

Attorney Anissah Nguyen, who is representing the newest plaintiff, said she intends to depose Watson by the end of 2022. She said her client has spent two years “struggling to cope with trauma from all that he stole from her.”

“Knowing her story will bring on the hard conversations, criticism and victim-blaming, my client found the courage to stand up and speak out,” Nguyen said in a statement sent to AP. “She seeks justice not only for herself and her own healing, but for the more than 20 women who refused to be shamed into silence, and for the victims who have yet to come forward.”

Watson's attorney, Rusty Hardin, said he's trying to find out the woman's identity. In previous cases, the court has ordered the plaintiffs to be identified by name.

The three-time Pro Bowl QB returned to the Browns' training facility this week for the first time since his suspension began on Aug. 30. Watson is only permitted to attend meetings with the Browns and work out as he moves toward a possible return.

He can't practice until Nov. 14, and can return fully on Nov. 28. Watson's first game back could be on Dec. 4 against Houston, which drafted him in 2017 and then traded him in March amid his legal troubles.

Following months of negotiations, and after an independent arbiter handed him a six-game suspension while calling his actions “predatory,” Watson agreed to the 11-game ban, a $5 million fine and to undergo treatment and counseling.

Watson wasn't seen in Cleveland's locker room Friday after stopping in briefly the previous two days during the period it was open to reporters. While he was away from the team, Watson worked out with a personal quarterback coach.

“That is not to be discussed, but there is definitely a plan in place,” he said. "It has been discussed at every level. We will get him ready.”

Jacoby Brissett has started for the Browns (2-3) during Watson's absence. The 29-year-old Brissett has played well, but Cleveland's defense has not lived up to expectations through five games.

Unable to land a franchise quarterback in drafts or free agency, the Browns traded three first-round picks to Houston in March for Watson and then signed him to a five-year, $240 million fully guaranteed contract.

Two separate grand juries in Texas declined to indict Watson on criminal complaints related to the women's allegations. He has long maintained he never forced himself on any women.