NFL says it will oversee investigation of Commanders' Snyder 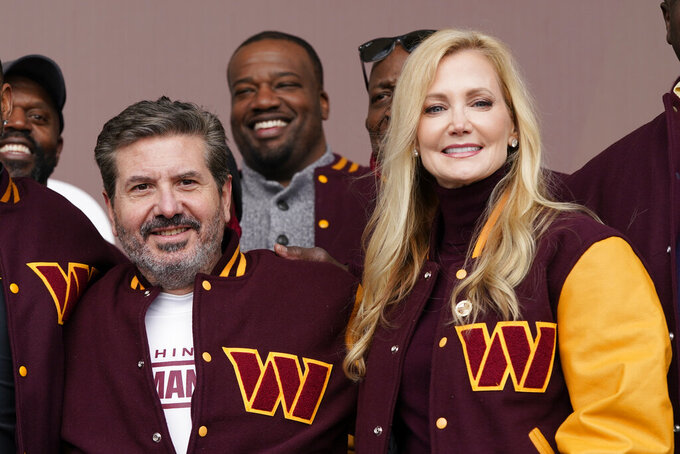 Dan and Tanya Snyder, co-owner and co-CEOs of the Washington Commanders, pose for photos after unveiling their NFL football team's new identity, Wednesday, Feb. 2, 2022, in Landover, Md. The new name comes 18 months after the once-storied franchise dropped its old moniker following decades of criticism that it was offensive to Native Americans. (AP Photo/Patrick Semansky)

The NFL has sent a letter to a Congressional committee explaining the machinations in the league's handling of the investigation of misconduct at the Washington franchise.

In the letter from the league's law firm to the Committee on Oversight and Reform, and the Subcommittee on Economic and Consumer Policy, the NFL says its actions in not publicly disclosing the findings of the probe solely were to protect those who offered information.

The letter was obtained by The Associated Press on Thursday.

Former Washington team employees and members of Congress have been pressuring the NFL and Commissioner Roger Goodell to release the report about the team’s history of sexual harassment and its workplace culture. The NFL took over an investigation of the team that was initiated by owner Dan Snyder, ultimately fining him $10 million. But it did not release a report detailing the probe’s findings.

“As we explained in detail in our December 31, 2021 letter, the NFL declined to waive privilege because that would mean exposing the identities of witnesses and the contents of their confidential interviews to discovery by third parties,” the league's letter said.

Earlier this month, six former Washington employees told the oversight committee that the report should be released, saying Snyder and the team have not been held accountable. One former employee made new allegations of sexual harassment by Snyder, which he denied in a statement.

On Wednesday, at his annual Super Bowl news conference, Goodell said the NFL will handle a new investigation into alleged sexual harassment at the team now called the Washington Commanders.

The Commanders announced hours before that news conference that the team had hired an outside investigator to look into Tiffani Johnston’s claims that Snyder groped her thigh at a team dinner more than a decade ago and and pushed her toward his limousine with his hand on her lower back. Snyder has called the allegations “outright lies.”

“I do not see any way that a team can do its own investigation of itself,” Goodell said. “That’s something that we would do. We would do it with an outside expert that would help us come to a conclusion of what the facts are.”

Maloney’s committee had questioned whether the Wilkinson investigation was truly independent because of a “common interest” agreement that appeared to give Snyder the power to block its findings from becoming public. Goodell said the investigation was kept under wraps to protect the privacy of team employees who were interviewed and that "we did not make a deal with Dan Snyder to release or have his approval for release of any information.”

Also in the letter to Congress, the NFL noted that “the common interest agreement had absolutely no bearing, and the team had no influence in any way, on the NFL’s decision not to waive privilege with respect to Wilkinson Stekloff’s findings.” The NFL claimed without such an agreement, “it would have been necessary to restart the investigation with a new law firm.”

After the NFL fined Snyder, he temporarily ceded day-to-day operations of the franchise to his wife, Tanya.

“Mr. Snyder and the NFL must stop hiding the findings from the Wilkinson investigation, comply with the Oversight Committee's requests, and commit that new allegations will not be swept under the rug,” the committee chairwoman, Rep. Carolyn Maloney, D-N.Y., said in a statement.