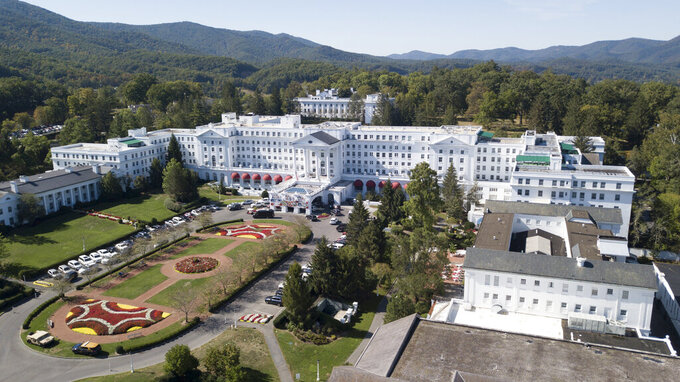 FILE - This Sept. 15, 2019, file photo shows The Greenbrier resort nestled in the mountains in White Sulphur Springs, W.Va. Several NFL teams are eyeing the resort owned by West Virginia Gov. Jim Justice as a potential training facility during the coronavirus pandemic. A spokesman for The Greenbrier resort on Wednesday, May 13, 2020 said they've been contacted by teams but no one has officially signed on to practice there this year. (AP Photo/Steve Helber, File)

CHARLESTON, W.Va. (AP) — Several NFL teams are eyeing a resort owned by West Virginia Gov. Jim Justice as a potential training facility during the coronavirus pandemic, a spokesman for the retreat said Wednesday.

The Greenbrier, a lavish resort in southern West Virginia, has previously hosted training camps for New Orleans Saints and the Houston Texans. Although several teams have contacted the resort, no franchise has officially signed on to practice there this year, hotel spokesman Cam Huffman said.

Justice, a Republican billionaire thought to be the state's richest man, bought the resort out of bankruptcy in 2009. The Greenbrier has been closed since March 19 because of the coronavirus pandemic.

Built for the Saints, The Greenbrier's practice facility includes two natural grass practice fields, a synthetic field, and a 55,000-square-foot building with kitchen and dining facilities, meeting rooms, weight and locker rooms, training and physical therapy accommodations. At an elevation of 2,000 feet, the location offers a cooler climate than some NFL teams’ training camps in the summer.

The Arizona Cardinals practiced there for a three-day stretch in 2015, though some players warned of some uninvited guests: ghosts.

Tony Jefferson, then a Cardinals safety, said he heard “a little voice, it was like a little girl’s voice" on his first night at The Greenbrier. Cornerback Patrick Peterson said some players were so spooked that they began traveling in groups.

"I haven’t seen anything, but I do hear some weird noises at night, but I don’t pay no mind to it. I fall right to sleep," Peterson said.

The NFL continues to plan for a preseason and regular season as scheduled, with the season beginning Sept. 10 with Houston at Super Bowl champion Kansas City. The league is conducting its offseason program virtually with training facilities closed because of the pandemic.

An annual PGA Tour event at The Greenbrier was scrapped last month when the tour released its new, virus-altered schedule. Turnout for the tournament had lagged and federal prosecutors targeted the facility in an investigation that subpoenaed Justice’s administration for documents about the resort, the tournament, the tournament’s nonprofit financial arm and Justice’s tax records.

The governor’s personal lawyer told reporters in January that the investigation ended with no finding of wrongdoing.