NFL teams up with NCAA for next round of safety improvements 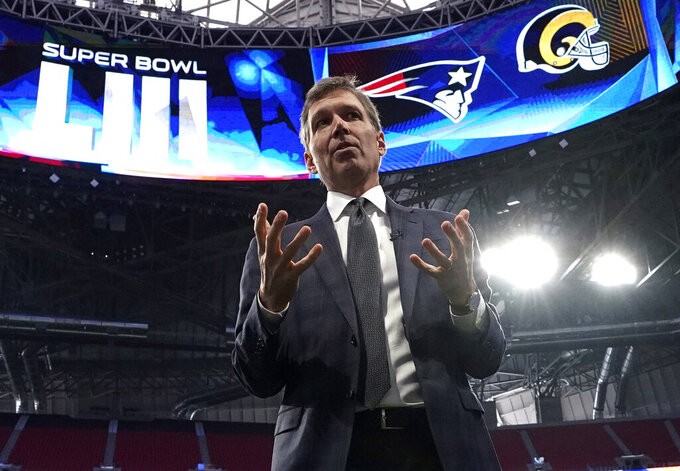 INDIANAPOLIS (AP) — The NFL's top medical experts believe they can take the knowledge of college football physicians and trainers and the research from the NCAA to make football safer — together.

Dr. Allen Sills and Jeff Miller, the NFL's executive vice president for health and safety initiatives, spent Monday and Tuesday in Indianapolis sharing data about their findings on the prevention and treatment of injuries. It's the most formal presentation league executives have had with college officials, and Sills and Miller hope this presentation leads to a broader conversation that includes discussions about lower-body injuries.

"We're able to show them what we're working on and what we're finding and how we're applying that knowledge into the day-to-day care of professional athletes," Sills told The Associated Press during a break. "I think we hope this is the start of even more regular interaction between the two organizations because we share the exact same goals, which is improving the health and safety of players."

The two-day meeting included participants from the NFL's health and safety team, the NCAA's Sport Science Institute and medical staffs from schools in each of the power five conferences. It comes amid a rapidly evolving landscape of injuries in football. Sills is the league's chief medical officer.

Over the past decade, Miller estimates the NFL made between 50 and 60 rules changes to enhance player safety. Members of the league's competition committee now routinely contact the medical team before considering making additional changes.

Plus, as Sills and Miller have collected more data they found NFL coaches and players increasingly receptive to their recommendations and conclusions.

Players, they say, are asking more questions about equipment, such as helmets. Coaches and assistant coaches, they add, have shown greater interest in how they can reduce the number of injuries at practices.

"They (coaches) care about these people," Miller said. "They care about the performance of them and they care about their long-term viability in the league, and those are all real good reasons to be open minded about how we practice, train and treat athletes as they go through an NFL training season or regular season."

The NCAA also has put a premium on player safety.

It has introduced rules such as "targeting" in football, established a formal concussion protocol that includes guidelines for players returning to action after suffering a head injury and adding a section on the well-being of athletes to the governing body's web site.

But the key to success may be developing how to get the message out about additional safety measures.

Until now, much of the focus publicly was on concussions: Last year's statistics showed a 24 % decrease in the number of concussions, dropping from 281 in 2017 to 214.

While Sills and Miller agree such work must continue, they also believe it's time to specifically tackle another key issue: lower-body injuries such as sprained ankles, strained hamstrings and knee injuries, which wind up costing athletes more playing time than concussions.

"We're taking a very, I think, comprehensive approach to understanding foot, ankle or knee injuries and the contributing aspects of that," Miller said. "I think, we are looking at the performance of certain cleats; their traction; how easily they release from different turf surfaces; how much different turf surfaces contribute to potential injuries; how we train our athletes, the load they go through on a daily basis or through a training camp and whether that correlates with particular sprains or strains."

The league has invested more than $60 million over the past 3½ years to get those answers, which they want others to use.

It's not just injuries, either.

Sills and Miller spoke Tuesday about handling emergency situations when players suffer cardiac arrests or heat illnesses, in addition to brain and spine injuries, and they back the NFL's new mental health initiative that was announced last month.

What they want most, though, is to share this information with schools that can help the sport remain strong and safe.

"We know that our knowledge is expanding rapidly and there are many things we can learn from each other," said Sills, a neurosurgeon who worked at Vanderbilt before taking the NFL's post in March 2017. "There's a lot of potential for collaboration around the research questions we're both working on. For example, we have a major research effort around playing surfaces and how cleats interact with playing surfaces. We can look at 1,800 athletes in the NFL, but imagine the power of being able to expand those observations to a number of NCAA athletes. That's going to allow you to reach conclusions a lot quicker and with more power because we'll have more athletes."