NFL teams ready to spend even with no franchise QBs around 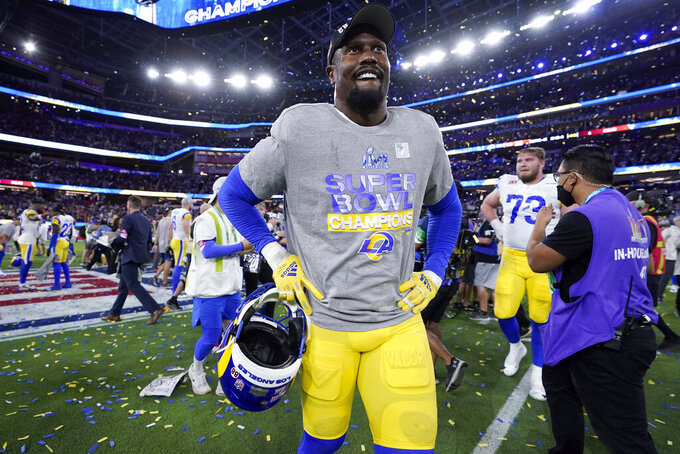 With the NFL’s broadcasting rights fees skyrocketing in the near future, leading to a much higher salary cap down the road, maybe this season’s free agency frenzy won’t be as frenetic as years past.

Sure, the salary cap, pretty much stagnant for two years due to the COVID-19 pandemic’s impact and now at $208.2 million, is headed upward — maybe into the stratosphere — in the next few years. Still, all of that extra money is, for now, make-believe bucks. So the spending spree we’ve seen every spring won’t likely be disappearing this time around.

“You want to get guys signed if you're looking for long-term deals,” says Hall of Fame general manager Bill Polian. “Do it this year, when you have an argument against the agent (with less money available), though that probably will not resonate much.”

Polian warns that basing new contracts on projected revenues and salary caps later on is a path filled with potholes. No deals are done in a vacuum, of course, and all sorts of factors should come into play during negotiations.

“With quarterbacks, for example, whatever is the highest deal that last happened, the next guy wants 5 to 10% more, and that is how inflation takes place anyway,” he explains. “They might smooth out the (salary cap) spikes, because it is in both sides' best interest to make it be orderly, and that has been the history of it, too.”

A major part of the history of free agency, naturally, has been where the big names land. With no franchise-type quarterbacks on the market when the bidding begins Monday in the “legal tampering period,” some of the top players received franchise tags: Green Bay's two-time All-Pro wide receiver Davante Adams and Tampa Bay WR Chris Godwin, for example. That leaves at the top of the class New Orleans tackle Terron Armstead; New England cornerback J.C. Jackson and Carolina CB Stephon Gilmore; edge rushers Von Miller of the Super Bowl champion Rams and Chandler Jones of the Cardinals; and Kansas City safety Tyrann Mathieu.

Keep looking for the quarterbacks of value. They're not there.

Yet, with the importance of that position magnified even more by who made the Super Bowl — the Rams getting over the championship hump after acquiring Matthew Stafford; the Bengals getting there with a second-year QB, Joe Burrow, who looks like the next great one — there could be plenty of dollars heading into the accounts of the likes of Jameis Winston, Marcus Mariota and Mitchell Trubisky. And yes, all three have flopped elsewhere.

“No stone unturned to find that guy” is how Denver general manager George Paton described the quarterback search before the Broncos made the mega-trade to get Russell Wilson from Seattle.

Tampa Bay with Tom Brady retired and Pittsburgh with Ben Roethlisberger hanging it up must be aggressive. Not to mention Carolina, New Orleans, Houston and, after sending Carson Wentz to Washington, the Indianapolis Colts. Buyers beware.

“The wisest choice is not to throw good money at a mediocre player,” Polian says. “That's much easier said by a guy no longer in it. We have a marketplace that is driven by who is out there and what the agents think they can command. You have seen every so-called expert talk down the quarterback market in the draft; I am still not sure we won’t have three or four taken in the first round. The game of musical chairs will still exist. Teams will be without quarterbacks.

“There will be veteran guys who have failed in one place before but will get pretty surprising money, I would think.”

Lots of teams have salary-cap tightness and must be more frugal than their fan bases would prefer. In the worst shape as the new business year approaches are five NFC clubs who are between an estimated $45 million (Packers) and $10-plus million (Buccaneers) over the cap. The Super Bowl champion Rams are about $20 million over, while the Saints are $33 million too high and Minnesota is $15 million above.

Big spenders could include some of the league's rising teams, with the AFC champion Bengals among them at more than $34 million under the cap with major needs on the offensive line. Just ask Burrow about that.

Miami, which also had a winning record in 2021, has more than $50 million available. The Chargers are up there, too, and Indy minus Wentz has the most room at just short of $70 million.

Other than Adams and Godwin, keys to their teams' offenses, no huge stars were franchise-tagged, with tight ends the most popular position for such a move. Dallas tagged Dalton Schultz, while Miami did the same with Mike Gesicki and Cleveland with David Njoku.

Again, no quarterbacks were attractive enough there, either.