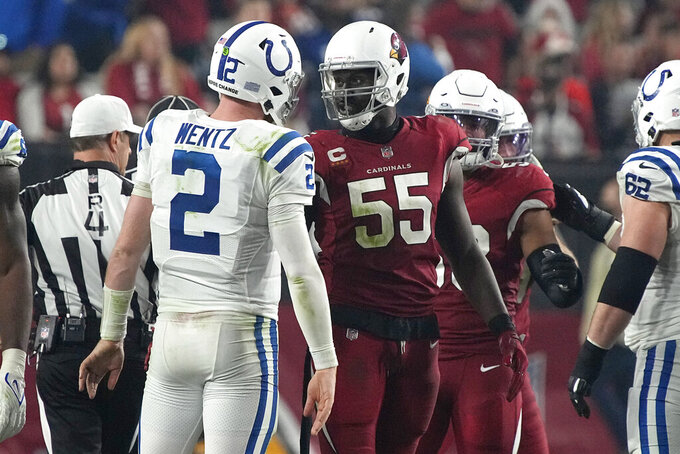 NFL coaches are taking precautions beyond the league’s COVID-19 protocols to help ensure players are available for games.

Several teams are separating quarterbacks, holding virtual meetings and doing whatever it takes to avoid breakouts of the virus. Green Bay, Washington, Baltimore, Cleveland, Chicago and New Orleans have played without starting quarterbacks due to COVID-19. Other key players have also missed important games in recent weeks.

The league and the NFL Players Association revised protocols on Tuesday, reducing isolation time for players who test positive for COVID-19 and are asymptomatic, including unvaccinated players, to five days from 10.

The league also has implemented restrictions on players eating together, limited number of occupants in the weight room to 15, and is requiring masks be worn by all players and staff indoors at team facilities.

As teams fight for playoff berths and positioning, the virus forces them to tackle another opponent.

The San Francisco 49ers (8-7) were among the teams who chose to meet virtually Wednesday.

“Our team, we all don’t prefer Zoom,” Niners coach Kyle Shanahan said. “People know what’s at stake with the chances of us losing guys for these games, so it wasn’t a hard issue at all going Zoom.”

The Philadelphia Eagles (8-7) had quarterbacks and specialists meet virtually but other position groups met in person.

“There is going to be some things we do, as far as getting young guys ready to play, that is a little unique and different,” Eagles coach Nick Sirianni said. “I’m not going to share that here right now for competitive advantages, but we’re doing some things to make sure if a guy gets sprung into action late, that he’s going to be ready to go even more so than what he would have in the past.”

The league is encouraging even fully vaccinated staff and players to avoid public areas including restaurants, bars and social gatherings. It’s not a mandate but it’s another extra step some team leaders will emphasize.

“I definitely think there’s a point where as a leader you want to try and keep things together as much as you can,” Eagles quarterback Jalen Hurts said. “You understand you have a group full of grown men who make grown-men decisions, but I definitely encourage everybody to stay safe, be responsible and take precautions in this thing. You can live with it and be OK if you knew you took precaution and did everything you could.”

The Minnesota Vikings (7-8) got back running back Dalvin Cook from the COVID-19 list on Wednesday after he missed a loss to the Rams.

“We’re staying six feet apart, in larger meeting rooms and keeping our masks on,” said Cook, who is unvaccinated. “Staying away from each other, basically. Got to talk from a distance nowadays. Stuff like that. Doing the right stuff so our team is in the right position come these next two weeks.”

Green Bay’s Aaron Rodgers is in the 90-day testing holiday, but the Packers (12-3) currently have 15 players on the reserve/COVID-19 list, including two practice squad guys. The most notable are punter Corey Bojorquez, tight end Marcedes Lewis and cornerback Kevin King.

“We’re pretty fortunate that we have a facility that can accommodate us just in terms of the space of making sure that everybody’s spread out,” coach Matt LaFleur said. “I think our guys are doing a good job of wearing their masks. ... We will do more virtual meetings post-practice, potentially. We’ve really kind of left it up to the position room in terms of how they’d like to do it.”

Tampa Bay Buccaneers coach Bruce Arians turned the team over to assistant Harold Goodwin after he tested positive on Tuesday. The Buccaneers (11-4) placed cornerbacks Jamel Dean and Sean Murphy-Bunting on the COVID-19 list on Tuesday.

“I had to remind guys to spread out, just get away from each other, just because it’s a dangerous time right now, not only for us as players but for the nation, for the world for that part,” Goodwin said. “We’ve just got to be smart about it. It’s here. We all know it’s here and we just have to be aware of what we’re doing, shaking hands, washing our hands, all those kinds of things. Just be smart.”

The Denver Broncos, who started a wide receiver at quarterback last season due to COVID-19, are isolating practice squad QB Anthony Gordon, and are holding virtual meetings.

The Buffalo Bills (9-6) have been holding virtual meetings for a couple weeks, and coach Sean McDermott has held most practices outdoors, where players are considered less susceptible to transmit the virus.

“We’ve taken about as many precautions as you can take,” McDermott said.

The Tennessee Titans (10-5) protected practice squad QB Kevin Hogan but aren’t quarantining other quarterbacks. They have 11 total players on the COVID-19 list.

“We’ve got ample space now,” coach Mike Vrabel said. “I mean, we’ve got the bubble. That’s a great set in there. We have a massive team meeting room that you have just a few people in. And so we’re very conscious of making sure that everybody is more than adequately spaced out.”

While the league and the players’ union have worked together to update protocols to ensure the season is played uninterrupted, teams know taking extra measures is helpful even though it’s not optimal.

“I think just with COVID and everything you’ve got to do what you’ve got to do as far as protocols go,” Niners quarterback Jimmy Garoppolo said. “But I think just as a football team, we enjoy being around each other. We enjoy being in the locker room, talking to each other, messing around, all that good stuff, and it’s just hard to do it on Zoom. That slight delay really makes things a little awkward.”