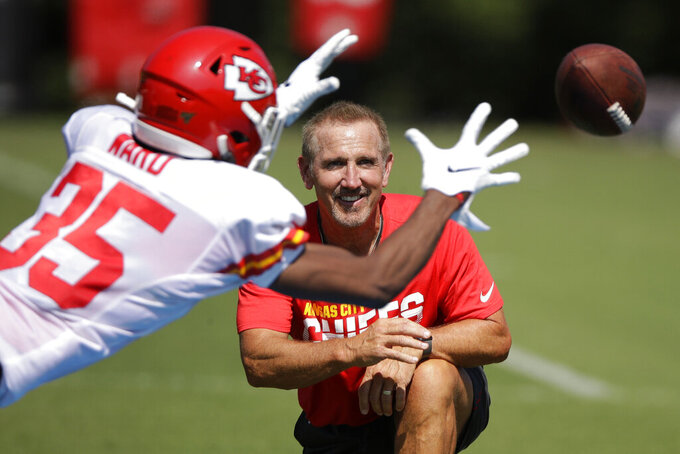 FILE - In this July 29, 2019, file photo, Kansas City Chiefs defensive coordinator Steve Spagnuolo watches a drill during NFL football training camp in St. Joseph, Mo. When the coronavirus pandemic forced everyone indoors — away from their everyday environments — creativity was the key. To working. To keeping in touch. And, for those making their living playing on football fields, to thinking up ways to bond as teammates. (AP Photo/Charlie Riedel)

NEW YORK (AP) — NFL players and coaches went home in March and stayed there for the next few months, along with most of the world.

Football pads were replaced by iPads. Handshakes and high-fives gave way to emojis and video chats.

When the coronavirus pandemic forced everyone indoors — away from their everyday environments — creativity was the key. To working. To keeping in touch. And, for those making their living playing on football fields, to thinking up ways to bond as teammates.

So, many played video games. Some held workout challenges. One team had an online cooking competition. Another designed movie posters.

During this time of social distancing, team building went high-tech.

“We have players that are installing defenses and we have Jeopardy games,” said Steve Spagnuolo, the defensive coordinator for the Super Bowl champion Kansas City Chiefs. “There's all kinds of things that we do to keep each other attentive and amused in some ways in sticking with football and yet getting things done. It's a challenge in this way.”

Team facilities will remain closed to the vast majority of players until training camp, which is scheduled to begin next month. The past few months normally would've been filled with in-person meetings as players and coaches got to know each other. This year, they’ve had to do most of that through computer screens with video meetings, phone calls, remote gym sessions — and whatever else they could come up with.

“You know, I wish more of the O-line played video games,” Baltimore offensive tackle Ronnie Stanley said, “because I’d be totally for it.”

Jacksonville coach Doug Marrone held weekly contests for his team, including a cooking competition last month with judging based solely on appearance and presentation. Wide receiver C.J. Board won the "top chef” honors and the contest was a big hit among the players — even if it was met by some skepticism at Marrone’s home.

“At the dinner table the other night, it was brought up: ‘How smart are you to have a cooking contest where no one can taste the food?’” Marrone said. “We’re just talking about presentation. ... Then it’s like, ‘Was that your idea? Because that’s pretty stupid if it was your idea.’”

The Jaguars also had a 1990s photo contest to coincide with the broadcast of ESPN's “The Last Dance” finale. Backup center/guard Tyler Shatley took the honors in that one. An “MTV Cribs” type of show was also among the competitions.

“I challenged my family, too," Marrone said. “What do you think in this virtual world, how do we build this team chemistry?”

The Browns held an online slam dunk contest, which rookie linebacker Jacob Phillips won by jamming a basketball into a milk bucket hanging on a tree — all while wearing work boots and overalls.

“That won, in my mind,” new Browns coach Kevin Stefanski said. "Guys are having fun with it. It's just a way to kind of get away from football and do something to get to know each other a little bit better.”

The Colts have been doing that by competing — remotely, of course — in some old-school board games, including Pictionary.

“One day, we were on there with the rookies playing tic-tac-toe just for fun,” coach Frank Reich said. “Putting two guys against each other and doing it where you have to play fast – take five minutes or seven minutes and just play a game."

Denver's linebackers and defensive ends were treated to some entertainment every week by star Von Miller — aka DJ Sauce Von the Don — who fully recovered after testing positive for COVID-19 in April.

“You know who Von is, he’s a jokester,” edge rusher Bradley Chubb said. “He’s serious when he needs to be and all that, but when he doesn’t have to, he’s funny. Every Thursday, we get done, so he deejays for us a little bit, makes sure we all end the week off right. Just the energy he’s been bringing, the energy all the guys have been bringing on those conference calls is amazing.”

Many teams have broken up the monotony of their Zoom meetings by inviting guests to join. Film director Spike Lee spoke on social issues with the Saints; Ray Lewis and Ed Reed chatted with the new generation of Ravens players; and actor Will Ferrell pretended to be Seattle tight end Greg Olsen during a meeting with the Seahawks.

Serious discussions and lighthearted moments have all been just a click away for players and coaches this offseason.

“There’s a little bit of a running joke on our staff that (Brian) Daboll doesn’t call anyone, he just FaceTimes people,” Buffalo coach Sean McDermott said of his offensive coordinator. “It’s been pretty cool to watch it unfold over this offseason because I’ve found myself now FaceTiming people instead of just calling them, which sometimes leads to weird surroundings — and I’ll let you figure out what that looks like through the course of life.”

Several players have recently joined protests around the country to support racial equality and denounce police brutality. The Broncos and Jaguars were among teams that organized their own marches.

As states begin to reopen and relax some social restrictions, some players have been able to get in some on-field face time.

Minnesota wide receiver Adam Thielen co-owns a group of high-performance workout facilities around the Twin Cities, and some of his teammates have been using them to stay in shape and see a few live faces instead of on a screen.

“We’re keeping the groups extremely small,” said center Garrett Bradbury, who has been joined by fellow offensive linemen Aviante Collins and Dakota Dozier. “But it’s good. It’s great workouts, and it’s good to be able to still get workouts in through all this craziness.”

“The biggest change has been, you know, feeling like a kid throwing the football at the park,” Packers quarterback Aaron Rodgers said. “You have to find different places to get some of these workouts in. ... We’ve got a couple good places now to throw it.

“But it’s just been different, I think, for everybody.”